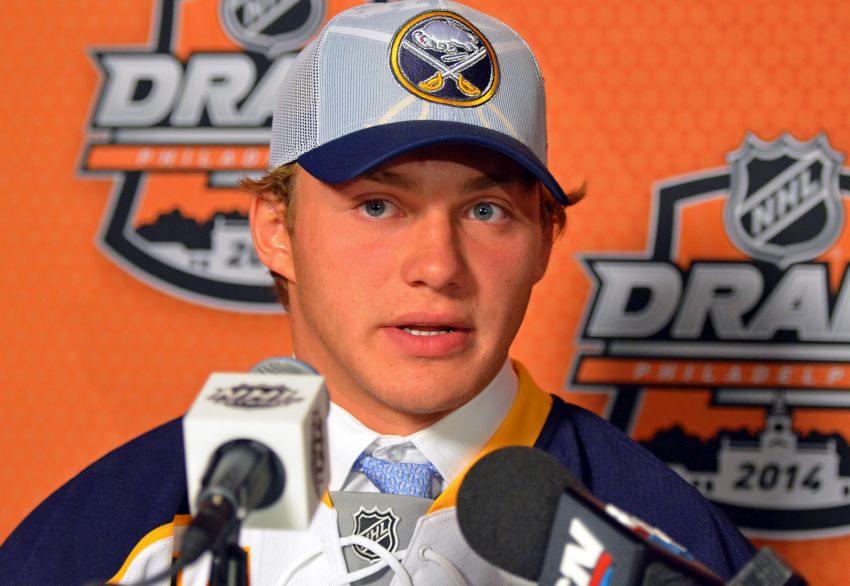 Then everyone passed on Lemieux, the son Claude Lemieux, one of the most notorious pests and clutch players in NHL history.

“They gave one of the more fiery guys in the draft, I’d say, a lot more fire,” Lemieux said this morning after the Buffalo Sabres started the second day of the NHL Entry Draft by selecting him 31st overall, the first pick of the second round.

Based on his interview with the Sabres at last month’s NHL Scouting Combine, Lemieux figured he wasn’t on their radar.

“I thought it was my worst interview,” Lemieux said. “They weren’t easy on me. But I guess they liked the way I reacted.”

Lemieux said he walked into the Wells Fargo Center two minutes before the Sabres picked him.

Lemieux, fresh off a 27-goal, 53-point season with the Ontario Hockey League’s Barrie Colts, wants to showcase his father’s style.

“He’s my biggest role model on and off the ice,” Lemieux said. “I’m proud of the career he had. I’m proud of the way he played and how hated he was. I just love that about him. I want to be that guy that can step up in the playoffs and really perform. … I want to come up big when it counts.”

“We like the style of game he plays. He plays a chippy, intimidating style. But in saying that, he’s not a one-dimensional player. He can score goals. He can shoot the puck. He goes to the net. He goes to the dirty areas. We like the whole package.”

“I know that he felt that. We didn’t feel that. We thought it was outstanding. We made it uncomfortable for him a little bit, fairly. We went after him a little bit about his relationship with teammates and different things. I assume that he didn’t that Buffalo was going to draft him at all, and that’s how some interview goes.”

One thought on “‘Crushed’ Brendan Lemieux figured Sabres had no interest”