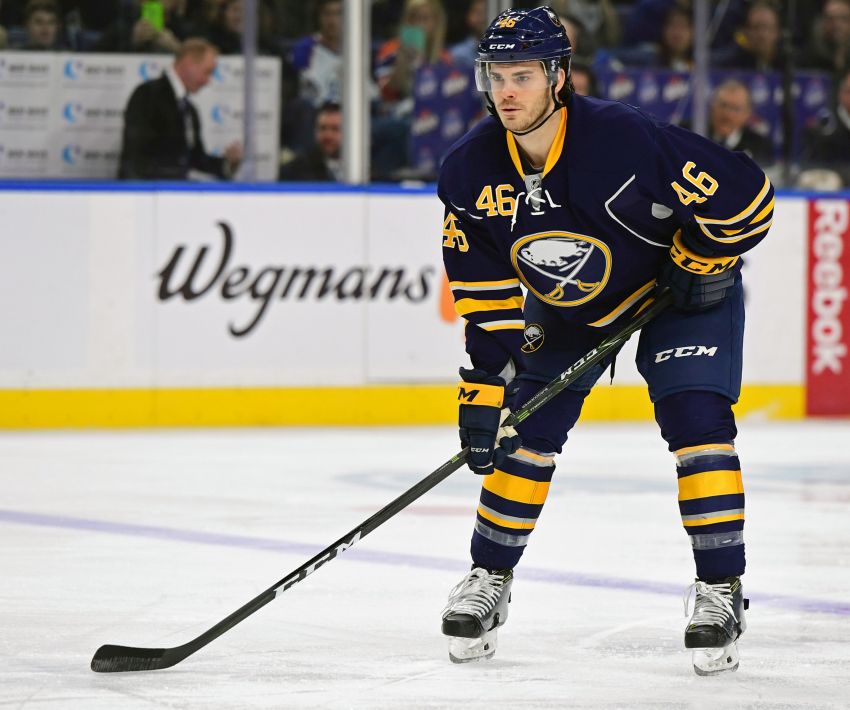 Four seasons into his career, Burgdoerfer, 27, had barely even sniffed the AHL.

His NHL dream was dying.

“When you play in the ECHL for four straight years, you’re turning 25, you definitely have some times when you’re doubting yourself,” Burgdoerfer said Tuesday prior to his second NHL game, a 4-3 overtime win against the Edmonton Oilers inside KeyBank Center.

Burgdoerfer can smile now looking back on his arduous journey – he played a whopping 429 games in the minors, including 272 in the ECHL – to reach the NHL.

With his parents, fiancee and twin brother watching Monday inside the Verizon Center, Burgdoerfer made his NHL debut in the Sabres’ 3-2 overtime loss to the Washington Capitals, skating 10 minutes, three seconds.

“It was a dream come true,” Burgdoerfer said. “Hopefully, it’s just the start of things to come, but it definitely was a great moment for me.”

Sabres coach Dan Bylsma started mentioning Burgdoerfer as a recall candidate months ago, in the midst of an impressive training camp from the undrafted R.P.I. product.

“I’m wondering how the heck … (he) played five years in the East Coast Hockey League,” Bylsma said during camp. “Somebody somewhere has missed something, because the way he’s played he should be playing at a higher level.”

“You can’t even put a price on it,” he said. “It’s been really important to me being here, having someone in your corner like that.”

Who is Burgdoerfer? What else helped the East Setauket native finally reach the NHL just days before his 28th birthday?

His career picked up steam in 2014, after his coach with the ECHL Bakersfield Condors, Troy Mann, was hired to run the Hersey Bears, the Capitals’ AHL affiliate and a perennial power.

“He was instrumental in me moving up the ladder and his belief in me,” Burgdoerfer said. “I probably wouldn’t be standing here right now.”

He earned invites to Washington’s training camp, but he had never played an NHL preseason game until this year, after the Sabres signed him to a two-way contract in July.

“Any time you can play some preseason games and feel like you contributed, you can see the light at the end of the tunnel,” Burgdoerfer said.

The Sabres summoned Burgdoerfer from the Rochester Americans on Monday because defenseman Taylor Fedun injured his shoulder late in Saturday afternoon’s 2-1 loss to Boston.

In his nine seasons as an NHL coach, Bylsma, who also played in the ECHL, has never seen a player pay so many dues to reach the big league.

“It would be tough to find … a guy who played in the East Coast Hockey League for four years, five years, he paid his dues there, worked his way up to get there,” Bylsma said. “It’s a long and hard road for him to have traveled that far. It’s one you love to see. …

“The thing that struck me the most about him in training camp is after his first exhibition game, (he said), ‘I can play in the National Hockey League,’ and that’s something that he’s fought long and hard and over a long road to get to.”

“Going through an injury like this, you know it’s going to come back,” Eichel told a crowd of reporters prior to the game.

“It’s the first time he’s had any incident on the ice where he did feel the ankle,” Bylsma said.

Sabres prospect Vaclav Karabacek, who’s beginning his pro career with the Elmira Jackals after an early-season injury, has been named the ECHL’s Player of the Week. The Czech winger, 20, had three goals and six points in three games.

Karabacek was a second-round pick in 2014.