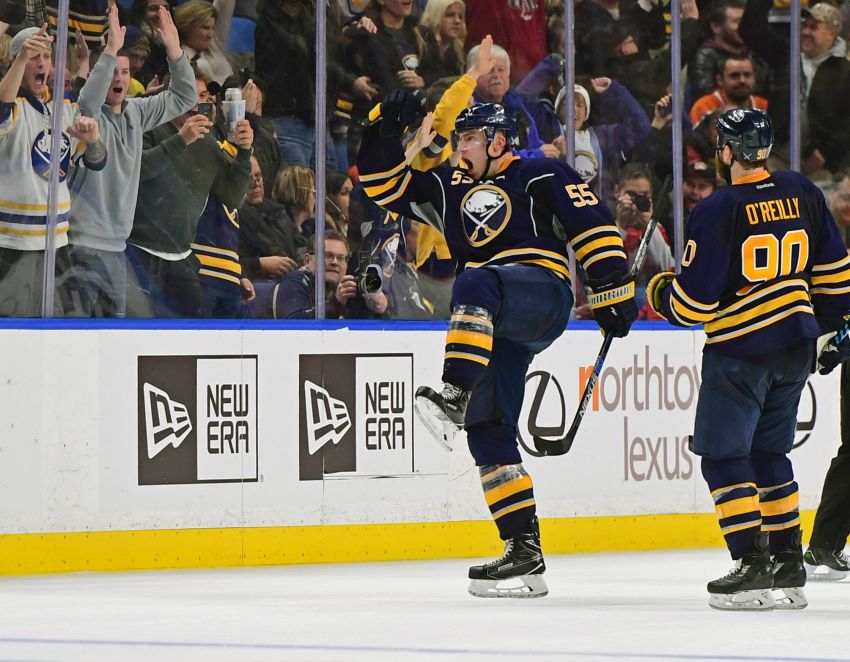 Despite averaging almost 27 minutes of ice time a night, Ristolainen, like the team’s other defensemen, couldn’t score.

Chalk it up it to bad luck. Chalk it up to his penchant for breaking sticks, which has often made him timid with the puck.

“We’ve been urging him to take the one-timer,” coach Dan Bylsma said after Ristolainen’s power-play goal 57 seconds into overtime sealed the Sabres’ 4-3 come-from-behind win against the Edmonton Oilers.

No one needed or deserved a goal more than Ristolainen, who played 29 minutes, 58 seconds Tuesday, his third straight game over 29 minutes.

“It got a lot lighter when he scored that goal.”

When the puck clanked in off the right post past Edmonton goalie Cam Talbot for Ristolainen’s first goal since March 3, it was just the second goal from a Sabres defenseman all season.

“You can’t get frustrated,” Ristolainen said. “Just try to keep it simple, get pucks to the net. Someday it’s going to go in.”

A night after blowing a late lead and losing 3-2 in Washington, the Sabres roared back against superstar Connor McDavid, the NHL’s leading scorer, and the Oilers.

With goalie Anders Nilsson on the bench, Evander Kane tied it with 29 seconds left, converting O’Reilly shot in front after it deflected off the post. Kane also opened the scoring and has three goals in three games.

“If you want to be a good team, you never lose two in a row,” Ristolainen said.

For about 30 minutes Tuesday, it looked like Nilsson might enjoy the easiest night of his 61-game career.

The Oilers, who boast a slew of talented young forwards, couldn’t generate anything.

Around the halfway mark of the second period, the Sabres held what felt like a commanding 2-0 lead after captain Brian Gionta scored. The Oilers, meanwhile, had only seven shots on goal.

Within minutes, however, the lead evaporated. By the 12:16 mark, thanks to goals from Jordan Eberle and Milan Lucic, the game was tied at 2.

The Oilers, incredibly, pumped 32 of their 37 shots on Nilsson in the final two periods.

After Nilsson stoned McDavid on a short-handed breakaway, Leon Draisaitl’s power-play goal put Edmonton up 3-2 9:59 into the third period. McDavid assisted on the last two goals.

That set the stage for Kane.

It’s no coincidence Kane, who didn’t score a goal until Saturday, has heated up with Eichel, his center much of last season, back in the lineup.

“We got healthy up front,” Kane said of his hot streak.

The Sabres’ blue line, however, is still banged up, with four defensemen missing. That’s why Ristolainen has been shouldering even more responsibility.

“He’s done a lot of good things,” said Cody Franson, who has the defense’s only other goal. “He’s one of the guys that’s had the snake bite the worst. He’s hit a lot of posts. … He’s fought that luck a little bit.”

The Sabres have a day off today, although Ristolainen’s ready to play again.

“It feels pretty good,” he said of the ice time. “That’s why you train in the summertime, to be in good shape. I feel great right now and could go again (tonight).”

The hype died down a bit for the second meeting between Eichel and McDavid, the two dynamic centers drafted first and second in 2015.

When the Oilers visited Buffalo on March 1, it felt like the Sabres were hosting a playoff game. KeyBank Center had a buzz not felt around these parts in years.

But some of the novelty has clearly worn off. Only 18,149 fans watched Tuesday.