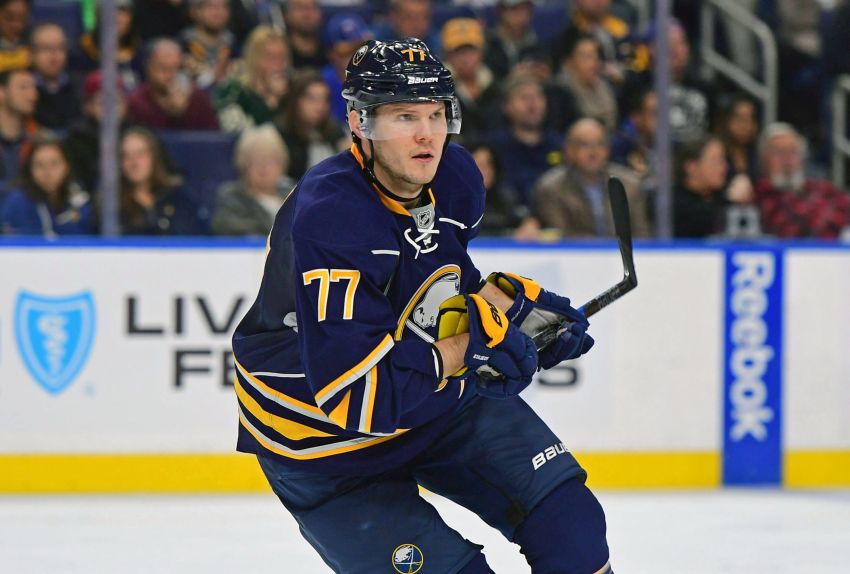 BUFFALO – Back in June, when the Sabres acquired Dmitry Kulikov from the Florida Panthers, they envisioned the Russian as a minute-munching partner for No. 1 defenseman Rasmus Ristolainen.

The injury will sideline Kulikov, 26, again for tonight’s tilt against the Boston Bruins at KeyBank Center.

“It’s something that Dmitry’s dealt with a long time,” Sabres coach Dan Bylsma said this morning. “It just flared up over the (Christmas) break, three days off.”

Kulikov, who has just one assist, bruised his back when he was knocked into an open bench door Sept. 30, his Sabres preseason debut. Bylsma said Kulikov is day-to-day.

“Just getting back and assimilating into his game and how he can play for us, that’s been a challenge for us,” Bylsma said. “He’s been a big part of our defense, a big part of how we want to play. He hasn’t been able to be there through the first 34 games on a regular basis and … we desperately need him to get back in there.”

With Kulikov shelved, Cody Franson, out the last three games with a lower-body/muscle injury, will return.

After a slew of terrible starts, the Sabres finally roared out of the gate in Tuesday’s 4-3 win in Detroit, jumping out to a 2-0 lead.

“We got to approach it a little differently,” Sabres goalie Robin Lehner said. “I think we just got to worry about ourselves. “(Before Detroit, we had) kind of been overthinking it a little bit … and having some of our worst games.”

He added: “I felt like we were a little bit more loose last game. We didn’t didn’t panic, we didn’t tighten up too much.”

The Sabres have a glorious opportunity tonight and Saturday afternoon against the third-place Bruins, who they trail by six points for the Atlantic Division’s final playoff spot.

If the Sabres want to climb up, they need to win the next two games. Tuesday’s victory snapped a four-game losing streak.

“We need to get excited about the opportunity that we have,” Bylsma said. “For everything that we’ve gone through for 34 games, you’re staring at a team that’s in the playoffs right now. You’ve got two games against them. You’re six points behind them. You’ve got three games in hand.

“You talk about big games, we’re at game 35, but these two games are as big as they’re going to get for us.”

– Winger Tyler Ennis, out the last 22 games after undergoing groin surgery, skated with his teammates this morning in a non-contact role.

“It’s still a fairly long road for Tyler to assimilate and get back into playing a game,” Bylsma said.

– Lehner, who took a stick to the throat late Tuesday, will start tonight. The Swede stayed in the game and was examined by a doctor Wednesday.

“It was just a little uncomfortable in the beginning, trying to catch my breath,” he said. “I couldn’t really get it. It kind of happened from nowhere.”