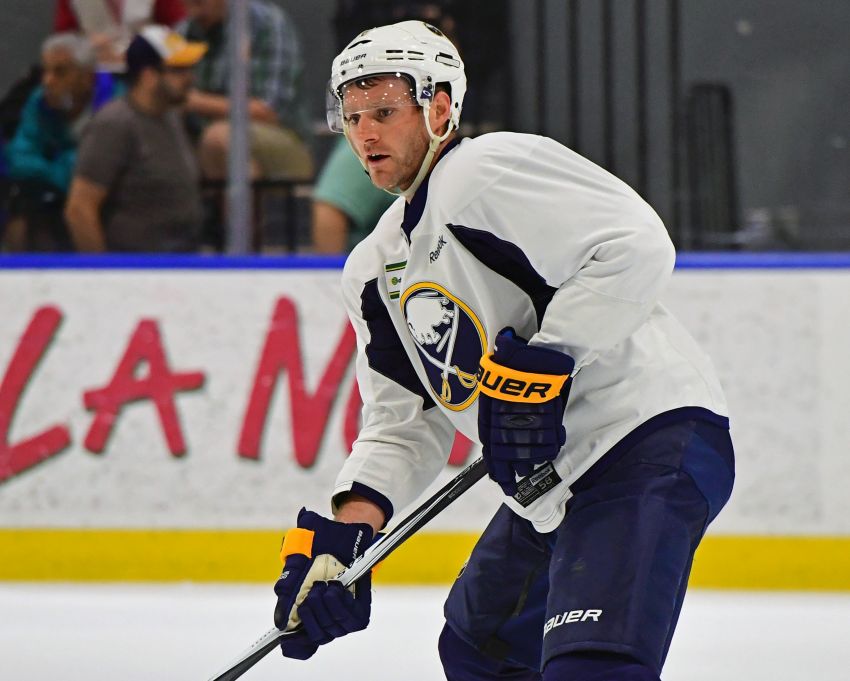 BUFFALO – Sabres defenseman Cody Franson had never experienced anything like the unusual vision ailment that sidelined him the final 23 games last season.

“It was very weird,” Franson said Friday following the first sessions of training camp inside HarborCenter.

Franson was originally diagnosed with a concussion after Columbus’ Scott Hartnell boarded him Feb. 19. But the loquacious veteran quickly passed his testing and briefly resumed practicing before his season ended.

So what was wrong?

“It was more of a vestibular thing than anything,” Franson said.

Franson’s left eye was moving about 20 percent slower than his right eye, creating all sorts of problems.

So in addition to his normal workout regimen, Franson spent much of the offseason retraining the muscles in his left eye “to speed back up with the way my right was going,” he said.

“Every time I’d turn I’d get lightheaded because my left eye was tracking slower than my right, so it was a very odd injury and tough to rehab,” he said. “I was able to get a good handle on it over the course of the summer, and I’m feeling good now.”

Part of his rehab included wearing goggles for “tracking drills” and working on perception.

“Until you get the goggles on, you couldn’t really feel your eye muscles doing much,” said Franson, who has 20/20 vision again. “So it was frustrating.”

It was also scary overcoming such an abnormal injury. A vision problem, of course, isn’t like hurting a knee.

“You just can’t battle through some pain and feel your rehab process working,” Franson said.

Franson, 29, is clearly excited for a fresh start after enduring the worst season of his seven-year career. His 6-foot-5, 236-pound frame looks different than last year.

To help him forget about last season, Franson switched from No. 46 to 6, his favorite number. With Josh Gorges wearing 4, his first NHL number, and Mike Weber sporting 6 last year, Franson combined the digits when the Sabres signed him to a two-year, $6.65 million contract

“I wasn’t really a fan of the number,” Franson said. “It went along with probably the worst year of my career, so when 6 became available, it was an easy chance to get out of that number.”

Franson’s numbers dropped across the board last season. In 59 contests, he scored a career-low four goals and 17 points. He had averaged six goals and 35 points the previous two seasons.

Still, he enjoyed a strong start, compiling 10 points before December. But after Zach Bogosian returned from a lower-body injury Nov. 17, Franson’s role changed. His minutes dwindled from around 20 some nights to about 15 or 16.

Eventually, Franson, whose power-play prowess is his greatest asset, wasn’t skating on either unit.

“I had to adapt to a different role, and I struggled with it last year trying to play in that lower-minute range,” Franson said. “I pride myself on being a power-play guy.”

Right now, Franson is probably a third-pair defender. Given his past exploits on the power play and the Sabres’ problems last year, Bylsma might want to give Franson another crack.

“I was very frustrated and set a number of goals for myself to try to come into camp and reassert myself here,” Franson said. “I wasn’t happy with the way last year went for myself and the way I played. I knew this was going to be a big year for me, and in order to have a big year I had to come in here and prove my worth in camp.”