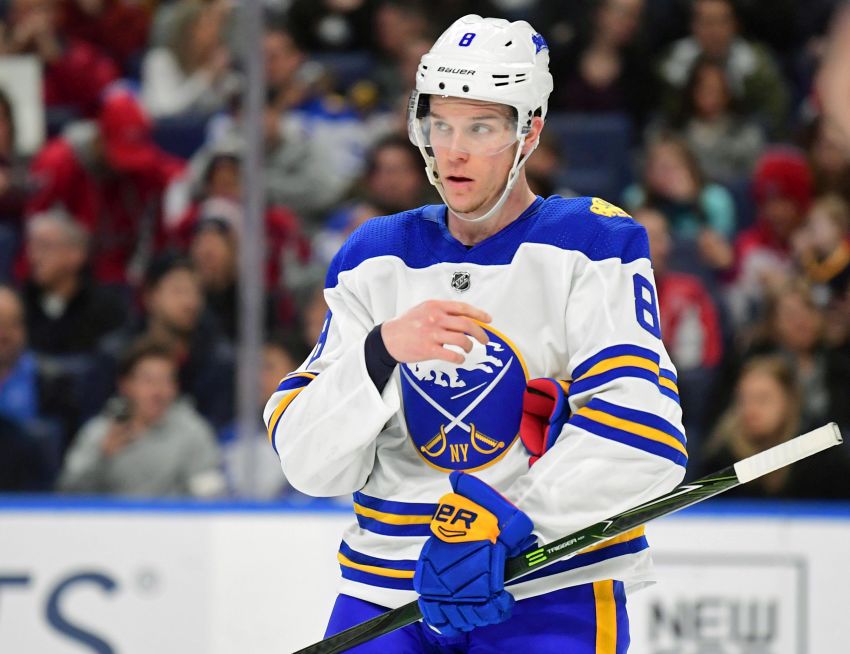 BUFFALO – Earlier this season, if you had asked Casey Nelson if he could play 20 minutes a night in the NHL, often against the opposition’s top line, the Sabres defenseman would’ve given you a straightforward answer.

But in tonight’s tilt in Detroit, Nelson, 25, will likely play big minutes on the second defense pair, meaning he’ll face some of the Red Wings’ best players.

Not long ago, Nelson, a free agent from Minnesota State, seemed to be buried in the minors. As injuries ravaged the Sabres’ blue line early on, he stayed in the AHL. When they finally recalled him for the first time, he just sat as a healthy scratch.

But tonight will be Nelson’s 17th straight appearance. He has skated at least 19 minutes in seven straight games. When Sabres coach Phil Housley recently demoted No. 1 defenseman Rasmus Ristolainen, he promoted Nelson to play with Marco Scandella.

“I’m probably playing at the highest level I ever have and as comfortable and as confident as I ever have,” Nelson said.

In the dreariest of seasons, Nelson has emerged as the Sabres’ biggest surprise and a rare bright spot.

How many youngsters in the last several years have exceeded expectations during a recall, forcing the Sabres to keep them? Nelson might be the only one.

Nelson became the 13th defender to play for the Sabres this season when he debuted Jan. 18. Just getting recalled from the Rochester Americans surprised him.

“It was a good surprise, I had no clue,” he said. “Just taking the opportunity and really trying to capitalize on it, because you never know if you get another.”

Nelson knows opportunities can vanish. After the Sabres signed him almost two years ago, he compiled four assists in seven late-season games.

“Those last seven games my first year … I couldn’t play this level of hockey that I am now,” he said.

Nelson made the big club out of training camp last season, but he only played sparingly before the Sabres sent him down.

In the span of a year, Nelson played three NHL games.

But Nelson embraced his time in the minors – he has played 95 games with the Amerks – and adjusted to pro hockey. By November, he was skating beside top prospect Brendan Guhle.

“They were a force, they were breaking down forechecks, they had a good chemistry,” Housley said. “That’s why he earned his way up here.”

Nelson likes earning everything. He has always flown under the radar and paid his dues. He believes any adversity has made him stronger.

He went undrafted and struggled as a 21-year-old college freshman in 2013-14. But he kept developing, and by 2015, NHL teams wanted to sign him badly.

“There should be bumps in the road,” Nelson said. “Success usually doesn’t come easy, there’s sacrifices you have to make. It’s like a road I’ve had almost on every level here.

With defensemen Zach Bogosian (hip) and Jake McCabe (shoulder) out for the season, Nelson should stay up the rest of the season.

How has Nelson, a puck-mover with offensive upside, carved out a spot?

“He’s done a terrific job, pretty consistent in his game,” Housley said. “I … like his stick detail, I like his gap, I like his first pass out of the zone and his angle to get out of the play.

“One of the things that really intrigues me about him is his ability to get shots through to the net, find a lane.”

Amerks coach Chris Taylor said they left Nelson off the power play earlier this season so he could focus on his defense.

“Once we started doing that, he was doing … a lot of great things on the penalty kill, and then all of a sudden, his offense came from playing good defense,” he said. “He found his confidence.”