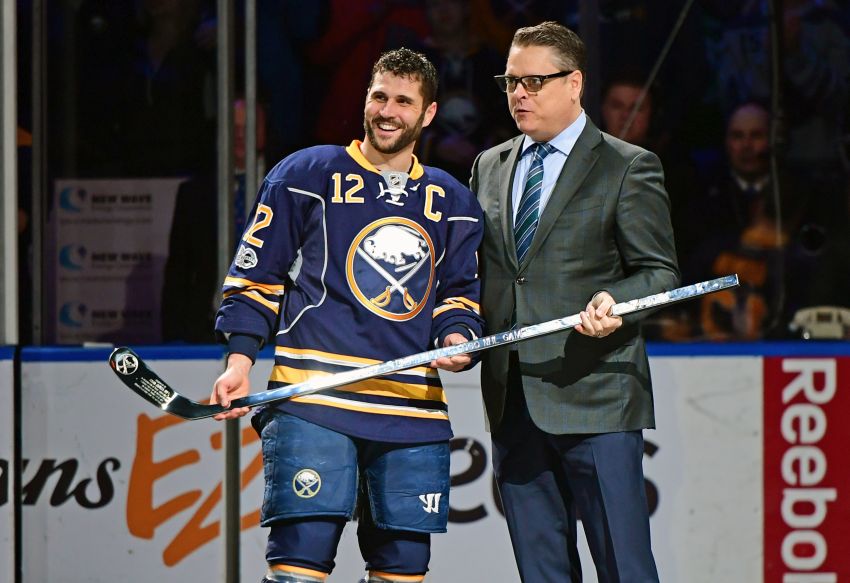 Fifteen or 20 years ago, it was even tougher for them to crack the NHL. That’s why Ennis, who’s listed at 5-foot-9, grew up idolizing diminutive stars, including 5-foot-7 Sabres captain Brian Gionta, who played his 1,000th NHL game Monday, a 4-2 win against the Florida Panthers.

“Brian was definitely an inspiration for me,” Ennis said Monday morning. “You want to talk about (Martin) St. Louis and (Daniel) Briere, but Gio was equally important inspiring me to be an NHL player.”

As another trying season winds down, the Sabres finally celebrated something special Monday.

The Sabres honored Gionta, who played his first game Dec. 30, 2001 with the New Jersey Devils, in a pregame ceremony.

They played a stirring video tribute before his wife, children and parents joined him on the ice. They also presented him with a painting and a silver stick.

Gionta then started the game beside center Ryan O’Reilly and Kyle Okposo.

Monday was all about Gionta, the 38-year-old Greece native who has enjoyed a long and unlikely career thanks to a mix of talent and tenacity few players possess.

While Gionta started his career in New Jersey – he won the Stanley Cup in 2003 – and later captained the storied Montreal Canadiens, he always wanted to play for what he considers to be his hometown team.

“It’s the team you grew up watching, fell in love with, you dreamed of being in the NHL in,” Gionta said prior to scoring his 289th NHL goal. “For it to have lasted this long, I would have never imagined it. To be able to come here to play was pretty special.”

Gionta became the 312th NHL player to reach the milestone and the 43rd American. He played 473 games with the Devils and 303 with Montreal. Monday was his 224th appearance with the Sabres.

Gionta might keep going, too. His three-year contract expires following the season. He said Monday he would “assess” his career later on.

What did Pysyk, 24, learn from his two years with Gionta?

“Just how to be a pro,” he said. “Just every day he brings it, no matter how he’s feeling. You’d never know by the way he’s acting on the ice or acting in the room. If he didn’t get a good sleep or if he’s grumpy, you’d never know. He’s always cheerful and he always had a good attitude.

The Sabres traded Pysyk, 24, to the Panthers in the deal that brought defenseman Dmitry Kulikov to Buffalo on June 25.