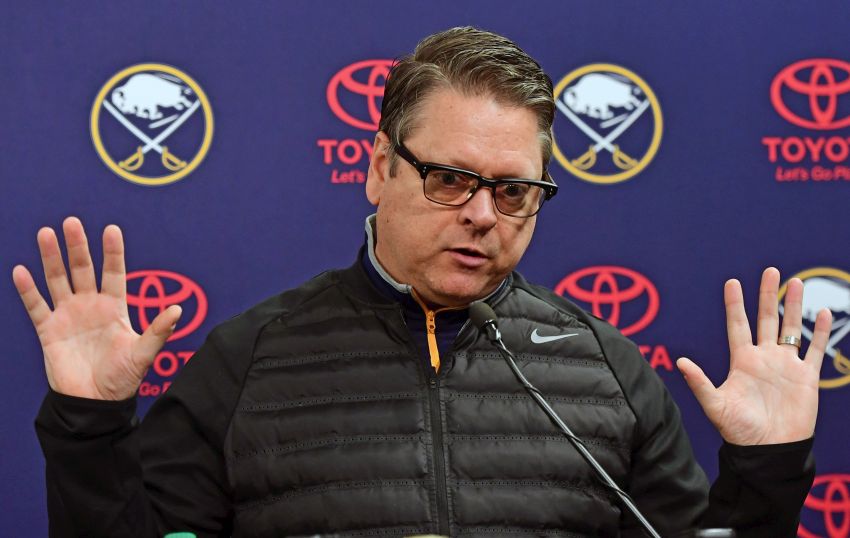 BUFFALO – Tim Murray’s history as Sabres general manager shows he usually takes anything for a player who can leave for nothing following the season.

But as Wednesday’s trade deadline dragged on and some deals started materializing around the NHL, the Sabres curiously stayed quiet.

When the 3 p.m. deadline hit, word quickly spread the Sabres, who have four unrestricted free agents, hadn’t made any moves.

“I just go with what’s put in front of me,” Murray said inside KeyBank Center. “I have no expectation going in, so I made some calls – I made a lot of calls – to set the table on trading away a couple guys. I made a few calls on trading to see if I could make a hockey trade, get younger, and this is the end result.”

The result is the reeling Sabres, losers of four straight contests entering tonight’s tilt against the Arizona Coyotes, will finish with the same lineup that has them stuck in seventh place in the Atlantic Division, destined to miss the playoffs again.

Murray, of course, showcased his usual personality during his 15-minute chat with the media, occasionally making some jokes. Still, he almost seemed stunned he couldn’t complete a deal on a low-action day around the league.

Murray believes the market has changed, perhaps because of the upcoming expansion draft.

Despite that, Kulikov, who has been a total bust, and defenseman Cody Franson figured to generate interest as cheap rentals.

“I don’t want to sit here and just say I couldn’t get anything for them,” he said. “I don’t want them to walk in tomorrow with their tail between their legs. We’re six points out of a playoff spot. We’d like to be competitive until the end of the year.”

The lower-back bruise he suffered in the preseason that has dogged him all year was a concern for other teams, Murray said.

“I didn’t like what I heard,” Murray said of the offers for Kane, who has morphed into arguably the league’s best goal scorer in the last three months.

Murray said he could be interested in talking to Kane, a free agent after next season, about an extension in the future. He wants some of Kane’s off-ice problems resolved, however.

Murray said he spoke to Gionta, who repeatedly said he wanted to stay, after a team contacted him Wednesday. Honoring the wish of the 15-year veteran was also important.

“He’s the captain of our team,” Murray said. “He’s a local guy (from Greece). He’s been a longtime player and a longtime character person in the league. I called him and asked him a couple questions, got answers.”

So where does a day of inactivity leave the Sabres, whose long rebuild is about to hit the four-year mark?

To Murray, Wednesday was “a small little speed bump” in his plan.

Murray said he’s “excited about the direction we’re going in.”

“But it takes time,” he said. “I’ve given my plan to ownership and our scouting staff. We know our timeline, and it’s not an exact timeline. … But that’s not for me to decide if we’re going quick enough.”

“It takes a long time to raise your kids, to raise them properly,” he said. “Most marriages where you meet the girl the night before in Vegas, they don’t last.”