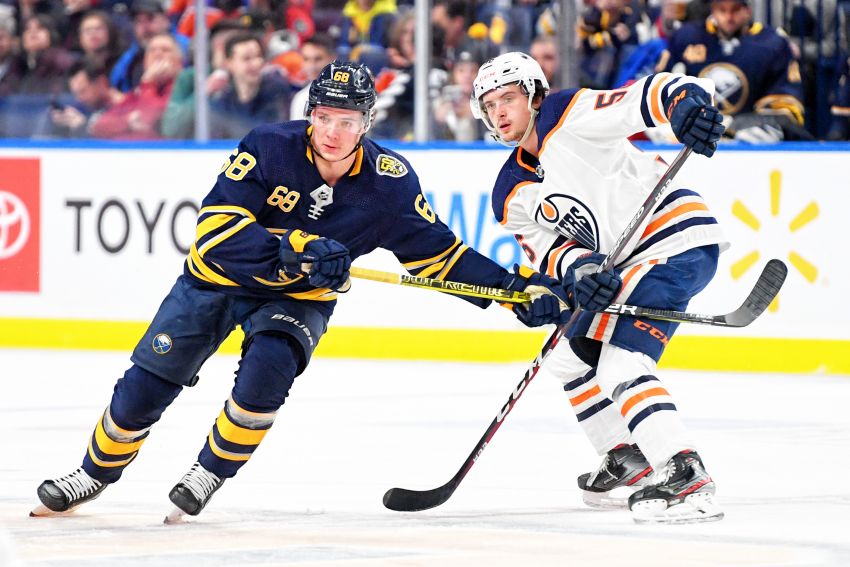 BUFFALO – Winger Victor Olofsson’s absence for the next five to six weeks could extinguish the Sabres’ playoff hopes. From the get-go, they’ve relied on the Swedish rookie to score goals.

Now, the lower-body injury he suffered in Thursday’s 3-2 overtime win against the Edmonton Oilers could sideline him until mid-February, the Sabres announced Friday.

Having scored 16 goals and 35 points in 42 games, including six power-play goals in the first seven contests, Olofsson has been a top Calder Trophy candidate all season. In his first weeks in the NHL, he quickly seized a spot at left wing on the top line with captain Jack Eichel and Sam Reinhart, utilizing his wicked shot to score.

Replacing Olofsson, 24, won’t be easy. The most likely candidate, winger Jeff Skinner, suffered an upper-body injury last week and will be sidelined three to four weeks.

Perhaps Skinner, who enjoyed his first 40-goal season playing beside Eichel a year ago, can move up when he returns.

In the meantime, it’s unclear who will sub for Olofsson this afternoon against the Florida Panthers at KeyBank Center.

Eichel had a maintenance day Friday, meaning the Sabres did not showcase their new No. 1 line. Rookie Rasmus Asplund moved into Olofsson’s spot up late Thursday.

“You look at what you have and not what you don’t have and you just work with that group,” Sabres coach Ralph Krueger said following Friday’s practice. “That’s what experience does for that part of your brain. There’s no room for emotion in this situation. You need to put the best possible group together to compete against Florida tomorrow and deal with Victor as a separate issue until he returns.”

Asplund, whose ice time has been dipping, could stay up with Eichel. Krueger tries to put a defensive presence on each line.

“There’s a defensive component to that position, releasing Jack and Sam with the confidence that who’s playing with them is going to cover, too, and they cover for each other,” Krueger said. “What we’re seeing in Asplund’s game is that two-way awareness and the ability, very quickly, to also involve himself in the offense which he’s still growing daily in front of our eyes here.

“But we really enjoyed seeing what we did in the end stretch of the game yesterday with him.”

Asplund said he won’t change his style if he plays on the top trio again.

“My philosophy is if they give you a chance, it’s because you’ve done something good,” he said. “If you start changing up what you’ve been doing, I just think that’s the wrong thing to do.”

Olofsson injured himself early in the third period when his skate got caught in a rut in the ice, causing him to fall backwards after he passed the puck.

“Ruts develop in the course of play and that’s a real freaky one where because of the move he was making at the time,” Krueger said. “He caught an edge in one of those ruts and it’s a low mathematical kind of situation.

“We’re not blaming that on the ice at all. That can happen. It’s one of those freak injuries that I’ve seen before and you don’t like to see it because of the fact it was so surprising. He had no chance to catch himself and that’s what causes then the stress on the body.”

With Olofsson out, the Sabres recalled winger Scott Wilson from the Rochester Americans on Friday.

Wilson, 27, has scored six goals and 10 points in 22 games with the Amerks this season.

The 5-foot-11, 177-pound Wilson played 64 games with the Sabres over the last two years, compiling six goals and 17 points. He won the Stanley Cup as a regular with the Pittsburgh Penguins in 2017.

Smith, a tough guy who made his NHL debut Tuesday, has already changed his number.

Sabres newcomer Michael Frolik has worn No. 67 his entire career, so Smith switched to 77.

Amerks goalie Jonas Johansson and defenseman Lawrence Pilut have been named to the North Division team for the AHL All-Star Classic on Jan. 27 in Ontario, Calif.

After Krueger finished talking to the media Friday, he walked back to the microphone to make sure he said, “Go Bills!”