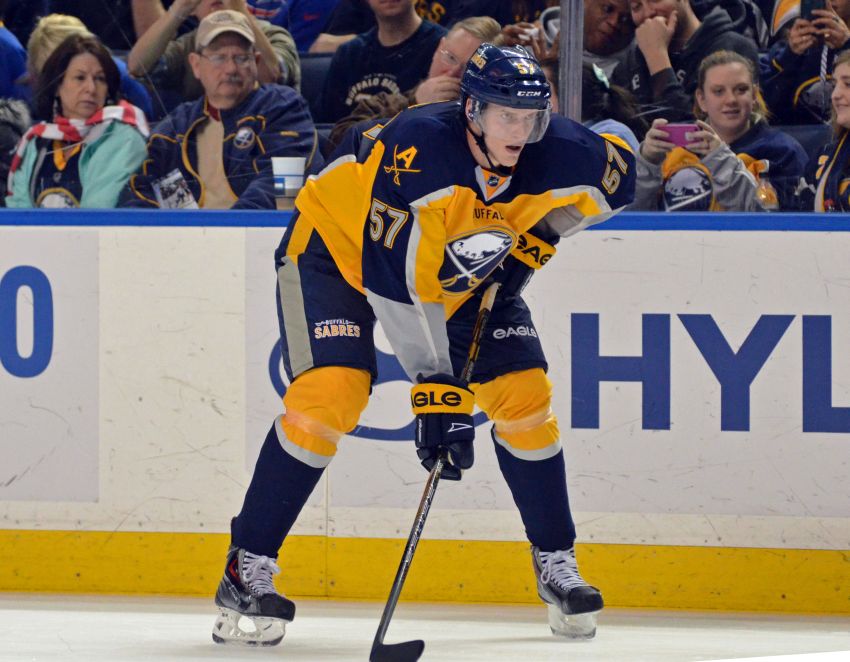 “I don’t want to change my game just because of how tall I am,” the 6-foot-8 Myers said after the Sabres prepared for tonight’s game against the Carolina Hurricanes inside the First Niagara Center. “It’s just something that comes with the territory.”

At 7:02 into the third period of Saturday’s 2-1 win against the New Jersey Devils, Myers hit the 6-foot-5 Zubrus high along the wall while killing a penalty, earning a minor for an illegal hit to the head.

Right before impact, Shanahan said, Myers was in position to make a “legal, full-body check” on Zubrus, who was eligible to be hit.

“However, rather than remaining in an athletic position and delivering a check into Zubrus’ chest or shoulder, Myers unnecessarily extends upward and drives his right shoulder into Zubrus’ jaw when head contact such as this was completely avoidable,” Shanahan said.

Before his phone hearing Monday, Myers said he was expecting a call “just because of what penalty I got on the play.”

“It’s just one of those plays where (I’m) being aggressive,” he said. “I came out of it with a phone call.”

And the second suspension of his five-year career. The NHL banned Myers three games in March 2012 for boarding Montreal’s Scott Gomez.

“Anything head area now you’re not surprised,” he said prior to Shanahan’s ruling. “You have to do something to stop players from getting up in that area. It’s a dangerous, dangerous hit.”

Nolan said the “taller players are going to hit in that area all the time.”

“I think they’re really concerned with the head injuries, and rightfully so they should be,” he said.

Alexander Sulzer will likely replace Myers, who can return next Tuesday against Philadelphia.

Myers is the third Sabre suspended this season for a head hit. Patrick Kaleta (10 games) and John Scott (seven) were also banned.

Nolan said center Ville Leino (lower body) is “more on a day-to-day basis than he was before.” Leino sounded like he would miss his third straight game tonight.

“It’s probably not going to be as bad as last,” Leino said.