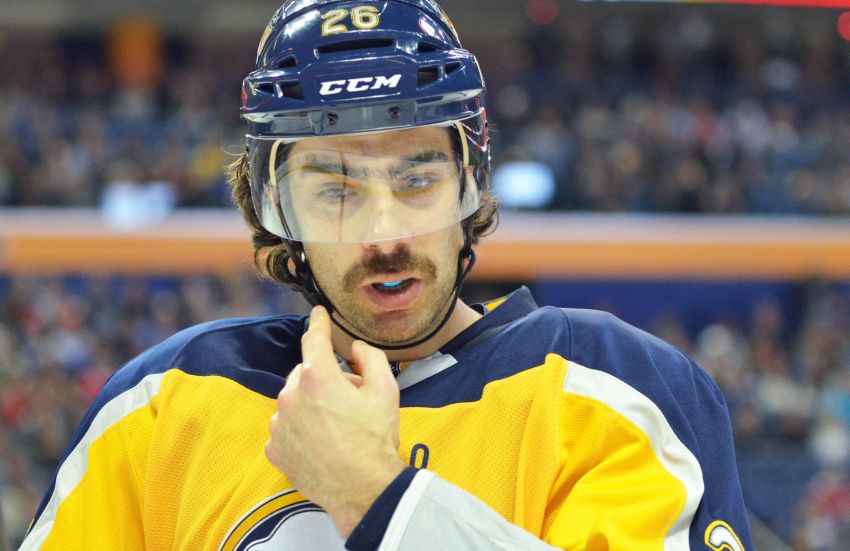 BUFFALO – Thirty games into what could be a very short Sabres career, Matt Moulson said he’s given a lot of thought to a future he can’t control yet.

The winger, quietly one of the NHL’s top goal scorers for years, would be coveted as an unrestricted free agent this summer. But before that, if the Sabres want to deal the 30-year-old, he’d be in high demand as a rental prior to the March 5 trade deadline.

Moulson said he can’t worry about getting traded for the second time this season.

“People told me I was going to get traded since the first day I got here, I think,” Moulson said Monday inside the First Niagara Center. “It’s not something new. I’ve expressed how much I enjoy playing with Buffalo.

“Again, it’s sports. These things happen. If I’m worried about that every time, I’d probably drive myself nuts. I’m just going to try to play hockey.”

Moulson has played some pretty good hockey for the Sabres, compiling eight goals and 18 points since arriving from the New York Islanders in the Oct. 27 Thomas Vanek deal. On a team lacking elite talent, Moulson’s probably the only true star other than franchise goalie Ryan Miller.

He would fetch a long-term deal worth possibly $6 million a season on the open market. With the salary cap going up to about $72 million, the Sabres will almost certainly have the space to re-sign him.

Moulson said he’s open to returning. He spoke to president of hockey operations Pat LaFontaine “a little bit a little while ago.” He hasn’t chatted with new general manager Tim Murray yet.

“I’ve definitely enjoyed my time in Buffalo,” Moulson said after the Sabres prepared for tonight’s home tilt against the Philadelphia Flyers. “Definitely great owners. The Pegulas are first class. I love playing for Teddy (Nolan) and the coaching staff. So I think the team’s heading in the right direction with Pat and Tim and Craig (Patrick, an advisor). … We’ll have to wait and see what they think.”

“He competes and he works,” Nolan said about Moulson. “He’s a great character guy. He demonstrates great leadership skills in our dressing room. So everything you want from a player and from a human being is top notch. He’s right up there with the most valuable guy we have on this team.”

“I think he’s a great motivator, a great leader,” Moulson said. “He’s going to make you work, but it’s also an enjoyable atmosphere to be in at the same time. It’s fun to come to the rink every day and work for a coach like that every day.”

Like most of his teammates, Moulson has struggled offensively at times this season. Remember, the Sabres have only 71 goals, a pace that would make them the lowest-scoring team ever.

Moulson endured an 11-game drought after scoring twice in his Sabres debut. He has one goal and one point in his last six contests.

“I think I can always be better,” Moulson said. “I don’t think I’ve played my best hockey. I think sometimes, for myself, especially once I get to feel more comfortable I start to play better.”

5 thoughts on “Matt Moulson open to staying with Sabres, not worried about getting traded again”