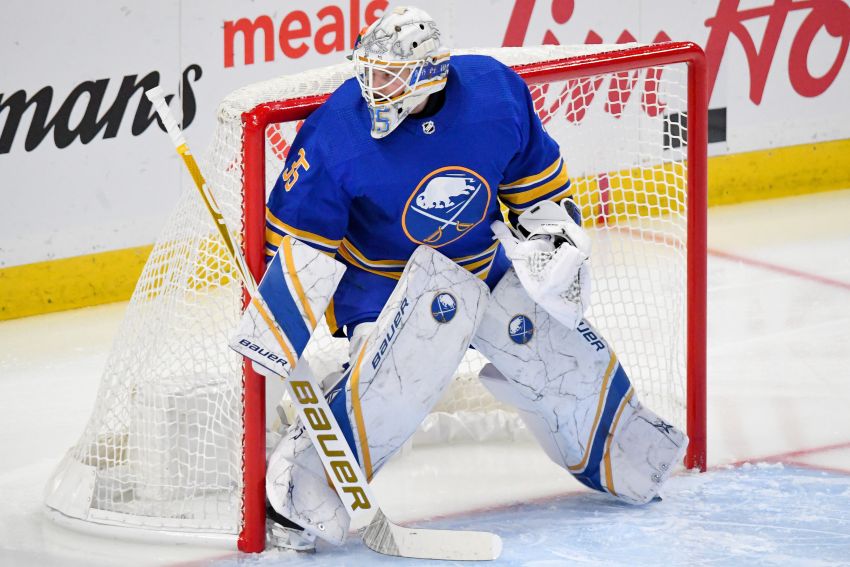 BUFFALO – Throughout the offseason, the Sabres have stayed in regular contact with Linus Ullmark’s agent and stressed they want the Swede to be their No. 1 goalie.

They don’t have another netminder in the pipeline ready to assume the starting job.

Unrestricted free agency opens Wednesday, and if Ullmark hasn’t re-signed by now, there’s a strong chance he will test the open market, where he should find plenty of suitors.

Ullmark, 27, performed dynamically on a dreadful team last season, compiling a 9-6-3 record with a 2.63 goal-against average and a .917 save percentage.

“We’re going to keep working at it,” Sabres general manager Kevyn Adams said Saturday of a new contract for Ullmark. “We’ll see where it gets. I also understand the rights players have and sometimes they make decisions but we’re going to do everything we can. We’ve been open and honest from the beginning with Linus and his agent that we prioritize him.”

Still, the Sabres have kept in touch with McCabe, who suffered season-ending knee injury Feb. 20.

“Jake, we’ve definitely had conversations all along here,” Adams said inside KeyBank Center after the NHL Draft ended. “I am a big fan of Jake McCabe as a player and a person. I think we’re at a spot here where he has gotten close that he said, ‘I think I’m going to see what’s out there.’ Doesn’t mean that (if) I get a phone call from his agent that we wouldn’t welcome him back, because I really think he was a good hockey player for us.”

Even if Ullmark and McCabe re-sign, the Sabres will almost certainly add a goalie and more defensemen through signings or trades.

The Sabres need a backup goalie. It’s unlikely the graying Carter Hutton, 35, will be re-signed. Hutton compiled a 1-10-1 record last season prior to suffering a season-ending lower-body injury March 22.

The Sabres, having just lost Will Borgen in the NHL Expansion Draft and traded Rasmus Ristolainen, must also replenish the blue line.

One thought on “Linus Ullmark, Jake McCabe could leave Sabres in free agency”