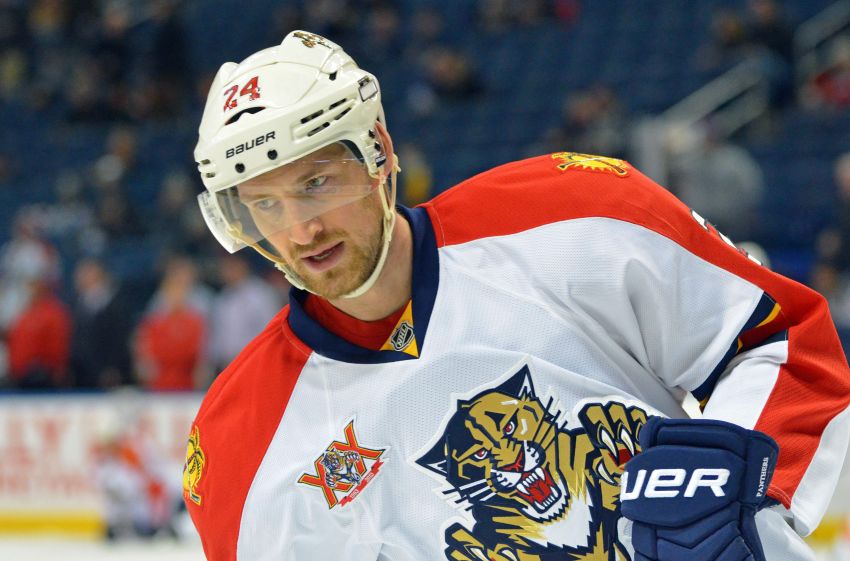 Then, despite compiling 10 goals and 35 points in 48 games, Boyes couldn’t find a team during one of the oddest summers in NHL history.

With the salary cap coming down and rosters packed, plenty of notable veterans experienced similar situations.

“It didn’t work out with the Islanders … and then it was real quiet,” Boyes said Tuesday prior to the Florida Panthers’ 4-3 win against the Sabres inside the First Niagara Center. “So I didn’t really know what to think. It was tough. Teams were full. Teams were up against the cap. There wasn’t a lot of spaces.”

Finally, the Panthers offered Boyes, who scored 76 goals over a two-year stretch from 2007-09, a tryout in September.

“I came down here on the assumption something could be available if I played well,” Boyes said. “It was just a different training camp. There wasn’t that comfort of having a deal.”

Boyes earned a one-year deal late in training camp and has impressed, compiling 12 goals and 22 points in 47 games entering Tuesday. He scored in regulation Jan. 9 before netting the shootout-clinching goal in the Panthers’ 2-1 win here.

Remember, Boyes went bust with the Sabres following a hot start, scoring a career-low eight goals and 23 points in 65 games in 2011-12.

“I think opportunity, that’s one thing,” Boyes said. “Last year, playing with Tavares. This year, getting put with a young guy for most of the season in (Aleksander) Barkov, we’ve found some chemistry. Just getting a chance to go play and getting that ice time. It helps.”

Boyes, a Mississauga, Ont., native, was disappointed he couldn’t earn his keep here. He liked owner Terry Pegula’s “awesome” new direction and was close to home.

“I enjoyed it,” he said. “I was really hoping it would work out. For whatever reason, it didn’t. I’ve been on a lot of teams. Sometimes it doesn’t work out. It’s no one’s fault. It just doesn’t go.”

“It was tough,” he said. “We had a lot of guys that did the same thing. Myself, (Jason) Pominville, (Drew) Stafford. … It was about finding a spot and finding the spaces and earning it. At times, I did get a chance. I didn’t take advantage of it the way I should’ve. I kind of paid for it.”

With veteran defenseman Henrik Tallinder back from a hand injury, sitting the 22-year-old Pysyk made the most sense.

“It’s not his play,” Nolan said Tuesday morning. “He’s been playing pretty well lately. It’s just he’s younger and (played) a lot of games. There’s a possibility he might go down to the farm team to play during the (Olympic) break. So that’s a lot of games for a young guy to play. More of just a precautionary day and rest day.”

The Swede might be heading back to the press box, though.

Omark, a minus-2 in 11:57 on the ice, skated on the right wing early beside Cody Hodgson and Steve Ott before Nolan yanked him off. Ville Leino replaced him.

“One thing about this game, you can’t play some time; you got to play all the time,” Nolan said.

“He knows where to go,” Nolan said about Omark before the game. “He knows all the moves. He has everything but … it doesn’t transfer into games. We just got to get him to be a little more gritty.”