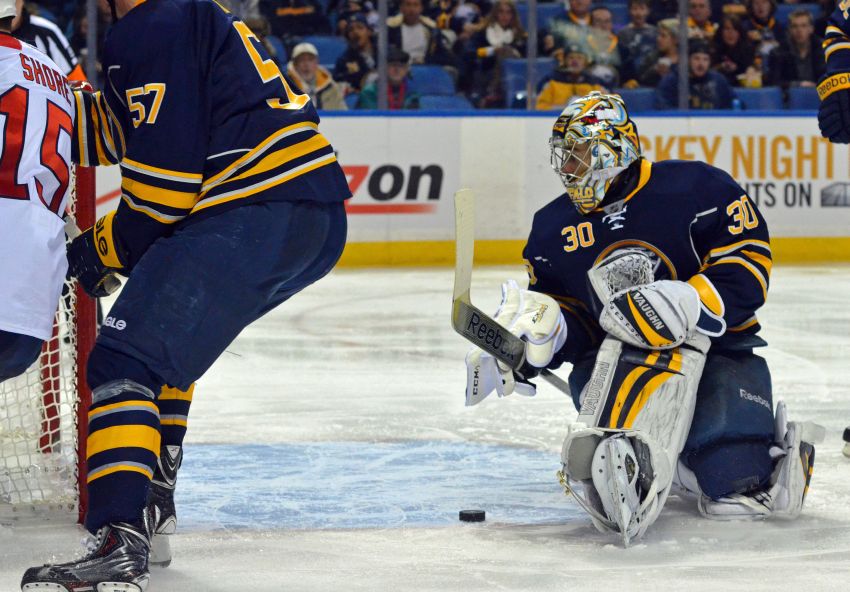 BUFFALO – Those precious goals, they’re finally starting to come. The Sabres have scored three in each of the last four games, their most prolific stretch this trying season.

Of course, that hasn’t change their fortune. The Sabres, even with an offensive spike, are still losing.

The Sabres started well enough, getting the first of Drew Stafford’s two early goals on the power play at 2:23. But the Panthers answered, scoring twice in 52 seconds late to end the first period up 3-2 inside the First Niagara Center.

Sabres goalie Ryan Miller struggled Tuesday, stopping only 18 shots, including nine of the 12 he faced in the first period.

The Panthers scored on a tip, redirection and perfect shot. Still, Miller, who’s played splendidly all season, knows he performed poorly before the announced crowd of 17,583 fans.

“It wasn’t one of my better games,” Miller said. “I don’t think it was a clean game, a little sloppy on my part in a few of those situations. That’s the way it goes over a course of a season. The first period didn’t do me any favors, so it looks pretty ugly.”

“Certainly we’re never going to point the finger at Ryan and say he was awful,” Nolan said. “It was just one of those games where the puck had eyes and it went in on him.”

The Sabres fought to the finish, however, pumping 16 shots of their 35 shots on Panthers goalie Tim Thomas during the third period. Ott scored on power play at 8:36, his 100th NHL goal. But they blew a long power play during the waning minutes.

“The way we finished is the way we have to play almost the whole time,” Nolan said. “The other team was pretty opportunistic tonight, they had two good chances and they had some good shots and it went in. We just didn’t play consistent.”

After Stafford opened the scoring – Florida had killed 29 straight penalties over 10 games – Jesse Winchester’s tip at 4:06 tied it.

Sean Bergenheim’s redirection tied it at 18:04. Then Ed Jovanovski’s slap shot from the point beat Miller

“I was just kind of getting a shot to the net and got lucky,” Jovanovski said. “I believe it hit off a guy and beat Miller.”

Miller added: “I have to find the deflection point and be in better position, not in good spots in the first two. Third one, just throw your hands up, not much else. …

“It was just one of those nights. Regroup, refocus. I got to get myself into a little bit better spot where I’m in better position.”

Stafford, who also had an assist, added: “It seems like they’re harmless little wrist shots. But when they hit off bodies, hit off sticks it makes it difficult for our guys to cover in front and for Millsie to see it.”

Nick Bjudstad’s goal from the left circle – he whistled a perfect shot over Miller’s right shoulder 16:12 into the second period – put Florida up 4-2.

Ott’s score gave the Sabres two power-play goals in a game for only the third time this season. Nolan didn’t like how the units performed, though.