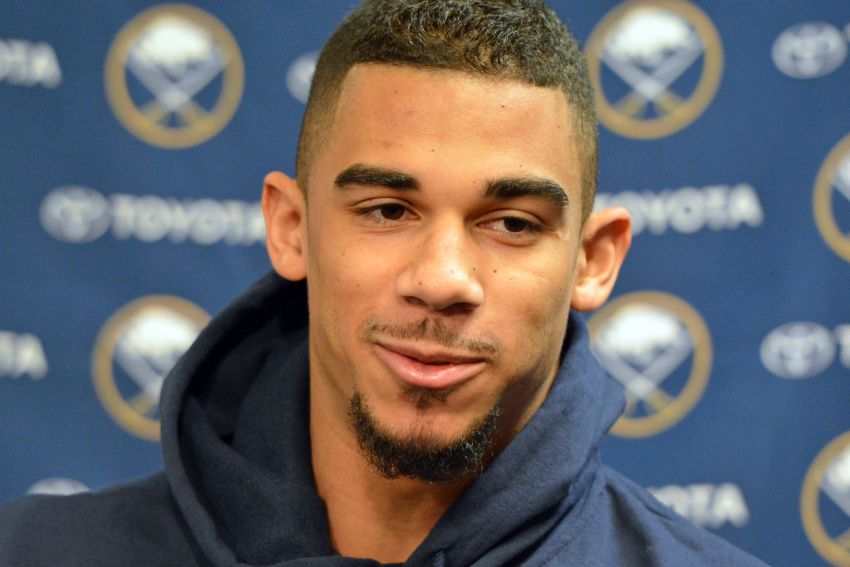 BUFFALO – For almost 13 minutes, Evander Kane smoothly answered questions about his turbulent past with the Winnipeg Jets and the future that could be special for the 23-year-old winger following his recent acquisition by the Sabres.

Wearing jeans, a Sabres hoody with his No. 9 and a sling around his surgically repaired left shoulder, an upbeat Kane sounded relieved to be out of Winnipeg, a city he calls a “fishbowl.”

“Let’s just put it this way, I think I’m definitely excited to have a fresh start, looking forward to moving on to bigger and better things here in Buffalo,” Kane said Saturday during his introductory news conference. “The organization has been fantastic in how they’ve treated me so far, the way they’ve brought me in. (I’m) really happy. My parents are really happy.”

The grass, of course, is usually greener elsewhere. Kane wasn’t happy in Winnipeg, where he had worn out his welcome.

Incidents have dogged Kane for years, creating questions about his character. He requested a trade well before the Feb. 11 blockbuster deal.

“There’s been numerous things that have happened in the past that are completely false,” he said. “So we’ll leave it at that.”

Earlier this month, it became clear Kane, the No. 4 pick in 2009, would never play for the Jets again.

His former teammates reportedly threw his tracksuit in the shower after he violated the team’s dress code. Kane responded by not showing up for a game that night and later having season-ending shoulder surgery.

“Was I wearing a tracksuit?” Kane asked. “No, but it’s something (that) tends to get blown out of proportion, especially playing in a Canadian market.”

“Being a Winnipeg Jet was something that everybody knew who you were,” he said. “They always wanted to talk to you, which is great, and that was definitely one of the things you enjoy. But negative things can take a toll a little bit.”

Kane sees plenty of positives in the lowly Sabres. The team has welcomed him warmly. He met coach Ted Nolan, general manager Tim Murray and his new teammates Friday.

He added: “They’re heading in the right direction. They have a lot of good young prospects. … I don’t think they’re going to be sitting around trying to wait years and years and years to rebuild this thing.”

Kane’s a huge piece of the rebuild. That’s why the Sabres paid a hefty price – defenseman Tyler Myers, winger Drew Stafford, a 2015 first-round pick and prospects Joel Armia and Brendan Lemieux – to land him, defenseman Zach Bogosian and a goalie prospect. Kane already has 109 goals in 361 NHL games, including a 30-goal season in 2011-12. He will almost certainly be the team’s No. 1 left wing when he returns next season.

“It’s a unique situation,” Kane said. “I’m already looking forward to next year but the team’s still playing. It’s kind of tough to balance that out.”

Given the Sabres’ sorry state, he could have Connor McDavid or Jack Eichel, the consensus top draft picks in June, centering him in 2015-16.

“That’s definitely an exciting possibility,” said Kane, who thinks he’s ready to become a leader. “Both those guys are really good players. We’ll see what happens.”

Kane will leave Buffalo soon and continue his rehab at home in Vancouver. The surgery wasn’t retribution to the Jets, he said.

“I was playing hurt with a majority of injuries throughout the season,” he said. “(It) just took a toll and it was time for me to get my surgery done.”

The surgery was more complicated than Kane originally thought because a hole in his shoulder was found.

“But everything’s fixed,” he said.

So Kane will keep playing his aggressive, heavy style.

“It’s not going to change my game,” he said about the injury. “I’m not going to second-guess going into a corner, taking a hit.”

Kane won’t change his personality, either. He doesn’t worry about his past trailing him.

“I know the type of player, the type of guy I am,” he said. “The people that are around me and manage me, they know that as well. That’s what matters the most.”

The Sabres, who had Saturday off, host the league-leading Nashville Predators tonight.