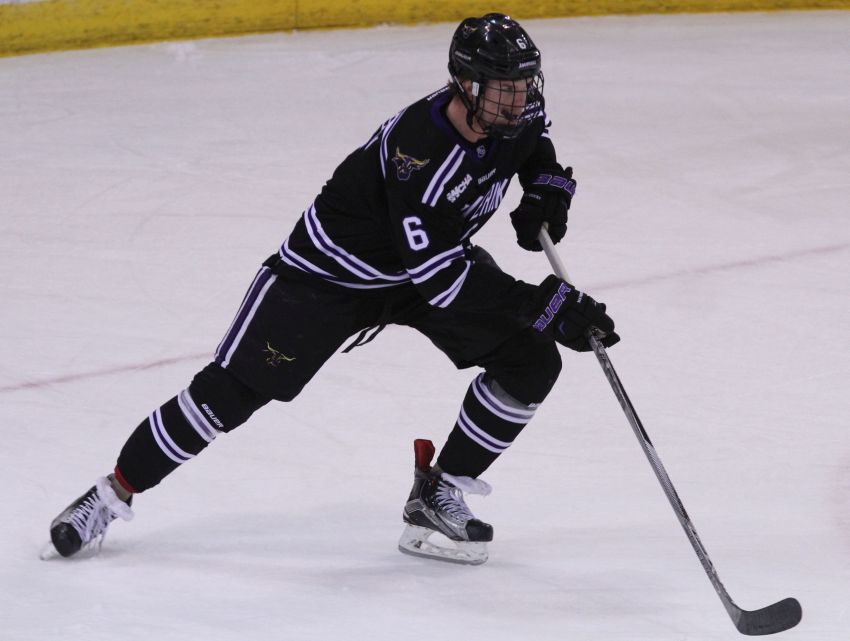 BUFFALO – Barely two years ago, Casey Nelson wasn’t ready for NCAA hockey. After some notable gaffes early in his freshman season, the newest Sabres defenseman got yanked from the lineup.

Nelson, 23, sat out a chunk of his first season before finally earning regular duty late in the year.

“I kind of got thrown in pretty early with a lot of stuff on my plate, couldn’t handle it, took some time off,” said Nelson, who will make his NHL debut with winger Hudson Fasching this afternoon against the Winnipeg Jets inside the First Niagara Center.

In three seasons, Nelson morphed from an overwhelmed freshman into a top prospect and the best defenseman available in college free agency.

“Once he got back into the lineup, he never came out again,” Hastings said.

Nelson became a smooth-skating, two-way defender, compiling 13 goals and 55 points and a gaudy plus-33 rating in 80 games over his final two seasons. He was named to the All-WCHA First Team this season and earned Defensive Player of the Year honors.

The undrafted Nelson, who calls himself a “late bloomer,” officially picked the Sabres over several teams on Tuesday, signing a one-year, entry-level contract.

“He’s really kind of defying the odds right now in terms of making the NHL,” Sabres coach Dan Bylsma said Friday. “I think he’s going to find a way to carve out a career for himself.”

So how has Nelson reached the NHL? Why did he develop so rapidly after starting college so slowly?

The 6-foot-2, 182-pound Nelson is used to dealing with adversity. He said he’s “kind of been behind” and had to “prove himself” at every level.

When Nelson joined the Mavericks after three seasons in the junior North American Hockey League, Hastings said he was “raw.”

“He skated well, but I think in his words, really not mine, (he’s) the prototypical late bloomer,” Hastings said. “He just needed some strength and needed a little bit of time to put some substantial muscle on his frame.”

Nelson’s penchant for “controlling everything he could control” helped buoy his development, Hastings said. That meant asking his coaches to break down film with him, rigorously following a plan in the weight room and eating properly.

Nelson enjoyed a huge sophomore season, compiling seven goals, 33 points and a plus-19 in 40 contests. He was also named the team’s most improved player and earned conference second team honors.

“I think that would’ve been kind of far-fetched, because I know I wasn’t ready,” Nelson said. “I had to have another big summer last summer just to get to the point where I am right now. It was kind of a stepping stone for my sophomore year, a good decision to go back, that’s for sure.”

Around Christmastime, in the midst of a strong junior season, Nelson decided he wanted to stay another year and finish his sports management degree. But he changed his mind about a month ago.

While school is important to Nelson, he said he knows he can get his degree in the future. He’s still taking four classes online while he spends the final two weeks with the Sabres.

So what might Nelson, a right-handed shot, showcase this afternoon beside Mark Pysyk, another righty? An anxiety-free game.

“There’s really not any (anxiety),” Hastings said about Nelson’s style. “He kind of takes what the game gives him, which I think is a real gift. He doesn’t force things, whether that’s offensively, defensively. I think he sees the game very well and just reacts to it.”

Nelson’s reaction to some long odds is “a big attribute,” Bylsma said.