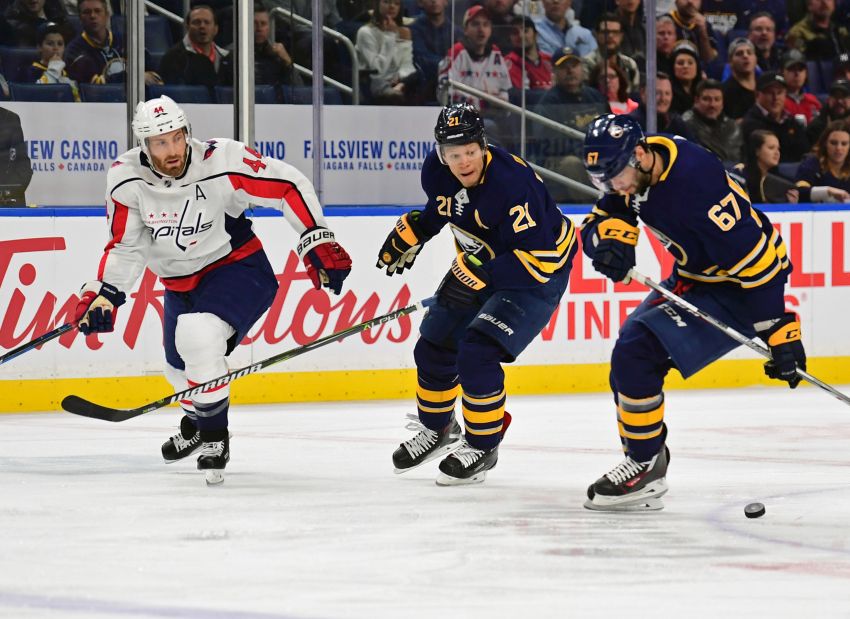 In his 10-year career, Pouliot, 31, has scored 122 times. His latest, which sealed the Sabres’ 3-1 victory against the Washington Capitals, might be the prettiest.

“It isn’t the type of goal I usually get a chance to do, but it ended up good,” Pouliot said following only the Sabres’ second home win this season.

The speedy Pouliot skated untouched through to the red line before maneuvering around Jakub Vrana. Pouliot’s speed put Brooks Orpik on his heels, creating space for him to beat Washington goalie Philipp Grubauer from the edge of the slot at 3:22.

“At first, I kind of wanted to go around him and just kind of toe drag him a little bit,” Pouliot said. “Once I pulled him inside, I thought I had a pretty good lane to shoot it in.”

The Sabres then held on, securing only their fifth win overall. Winger Evander Kane’s empty-netter, his second goal of the night and team-leading ninth, sealed it.

In a season already full of disappointment, Pouliot, who signed a one-year contract July 1, has quickly emerged as Buffalo’s biggest surprise.

Pouliot has scored all five of his goals – by comparison, star center Jack Eichel has four this season – and has six points in the last seven games. Three of Pouliot’s goals are winners.

Clearly, Pouliot, whose miserable 2016-17 campaign ended with the Edmonton Oilers exercising a buyout of his contract, has a chip on his shoulder.

“I was really frustrated the whole year and things weren’t going good,” said Pouliot, who scored eight goals in 67 games last season. “I was down on myself, I was hard on myself. It’s frustrating playing that way and trying to get out of a slump like that. Right now, things are good.”

Sabres defenseman Jake McCabe said: “I’m sure he has a chip on his shoulder. Anyone wants to come in here and prove themselves. He’s done that and more.”

After moving around the lineup early on, Pouliot has been showcasing strong chemistry at left wing beside center Ryan O’Reilly and Kyle Okposo on the second line.

Housley said: “He’s been really consistent since he moved up there.”

“I don’t think my starts haven’t been really good the past few years,” he said. “It always takes me a little bit to get going. … I got to consistently do it throughout the year.”

The Sabres started Tuesday’s tilt before 17,146 fans inside KeyBank Center consistently. For one of the few times this season, the Sabres pounced on an opponent, outshooting the Capitals 15-4 in the first period.

“We had the start that we wanted,” Housley said. “I thought we came out with authority. … We didn’t get anything for it, which is important to realize that you just stay the course.”

Kane scored 2:39 into the second period. With Pouliot’s line on the ice, Capitals superstar Alex Ovechkin tied it later in the period, beating Sabres goalie Robin Lehner, who made 24 saves.

In between, McCabe fought Tom Wilson after he leveled Sabres center Sam Reinhart along the boards.

“We got some timely goals, we played sound defensively, Robin played great, we had some big blocked shots and some emotion with (McCabe) stepping in and sticking up for (Reinhart), which is great to see,” Kane said. “We deserved to win.”

“We got some big efforts from some guys, just playing with that passion and that fire, not willing to lose,” he said. “I thought that was great. You get a fight out of Caber against one of the tougher guys in the league, stepping up for his teammate, that’s the way we have to play.”