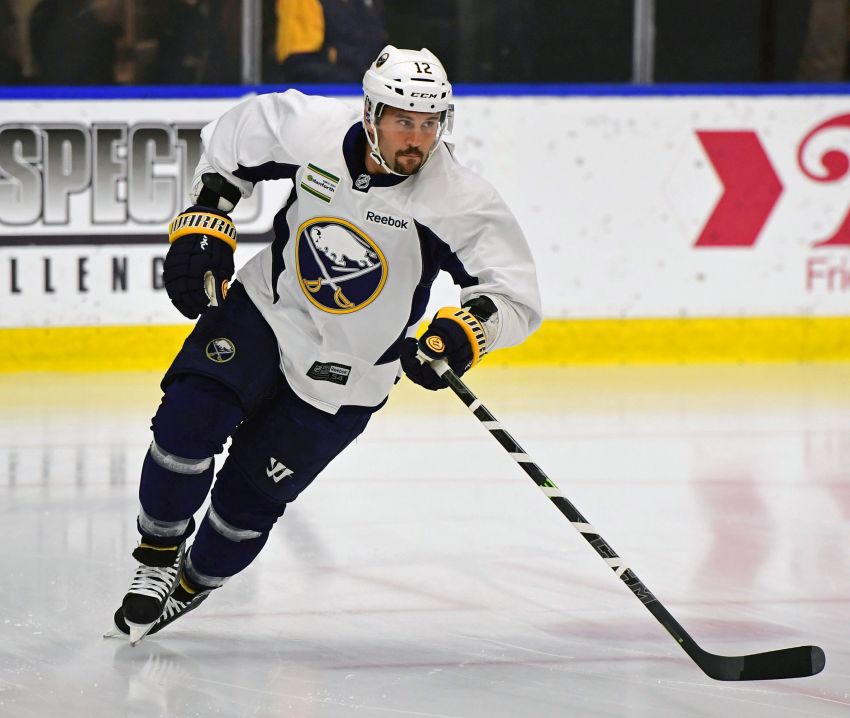 But one time still stands out vividly.

As a member of the Montreal Canadiens, Gionta’s teammate, defenseman Hal Gill, played his 1,000th game early in 2011-12. Apparently, Gionta, then a 32-year-old in his 10th season, thought his friend was ancient.

“At the time, I thought, ‘Holy crap, that guy’s old,’” Gionta recalled Sunday inside HarborCenter. “It’s coming full circle back on me now.”

Yes, by hockey standards, Gionta is old. Tonight’s tilt against the Florida Panthers at KeyBank Center will be his 1,000th NHL appearance.

How old is Gionta? The Greece native made his NHL debut in the New Jersey Devils’ 2-1 road win against the Edmonton Oilers on Dec. 30, 2001. That was 5,566 days ago. Gionta’s teammate Jack Eichel was only 5 years old then.

“It’s one of the biggest accomplishments you can have in the game is be called an old guy,” Sabres coach Dan Bylsma said. “I have similar feelings of guys who played a long time in the league and played a lot of games. You just don’t know how it’s possible to play that many hockey games.”

Gionta’s unlikely career is filled with big accomplishments. The 38-year-old winger won the Stanley Cup with New Jersey in 2003. He has also captained two franchises, scored 48 goals in a season and represented Team USA at the Olympics.

Remember, Gionta, who’s listed at 5-foot-7, is one of the NHL smallest players.

“He was able to do what not very many guys have been able to do with his stature, get in the game and play,” Bylsma said.

Sabres defenseman Josh Gorges said Gionta was probably told growing up he would never make it.

“Not only did he make it, he succeeded beyond expectations,” Gorges said. “If you can’t look up to somebody like that, you’ve got to give your head a shake.”

Gionta earned an opportunity, in part, because former New Jersey general manager Lou Lamoriello drafted him 82nd overall in 1998, after he had just completed the first season in what would become a dynamic four-year NCAA career at Boston College.

“I’m just fortunate some people believed in me back in the day,” Gionta said. “(I’m grateful to) the Devils for giving me a chance to break into the league. I would’ve never thought it would’ve lasted this long.”

These days, Gionta is still a durable, productive player. He has played all 75 games this season, compiling 14 goals and 32 points.

“He’s still at 38 playing like a young man,” Bylsma said.

But the Sabres, who are struggling to emerge following a long rebuild, wanted Gionta for more than that. They signed him to a three-year contract in 2014 because he could also mentor their young players.

Those qualities helped the Buffalo chapter of the Professional Hockey Writers’ Association nominate Gionta this month for the Masterton Trophy, an annual award that recognizes “perseverance, sportsmanship and dedication to hockey.”

Gionta’s ability to evolve has helped him last so long through different eras. He morphed from a checker as youngster into a scorer before settling back into a checking role as a veteran.

“It’s finding a way, finding a role on each team you’re on,” Gionta said.

Gionta entered the NHL in a much different era. Bylsma said it was a “sludgier game” then. The league wasn’t kind to undersized players, even if they possessed skill. It was a big man’s game in the early 2000s.

“A lot was different,” Gionta said. “There lot of clutching and grabbing, no two-line passing. There was a lot of different things to slow you down and make it easier for the bigger guys to grab you.”

Gionta grabbed Gorges’ attention when they became teammates with the Canadiens in 2009. Gorges respected Gionta’s champion pedigree – he also won a national title as a senior in college – and noticed his professionalism.

“A guy I’ve looked up to for the last seven, eight years,” Gorges said. “Brian’s a very close friend of mine.”

Gionta said: “He’s one of my best friends, has been for long time. … He’s one of the guys I’ve really connected with. We’ve had each other’s back for a long time.”

That’s why tonight will also be special for Gorges.