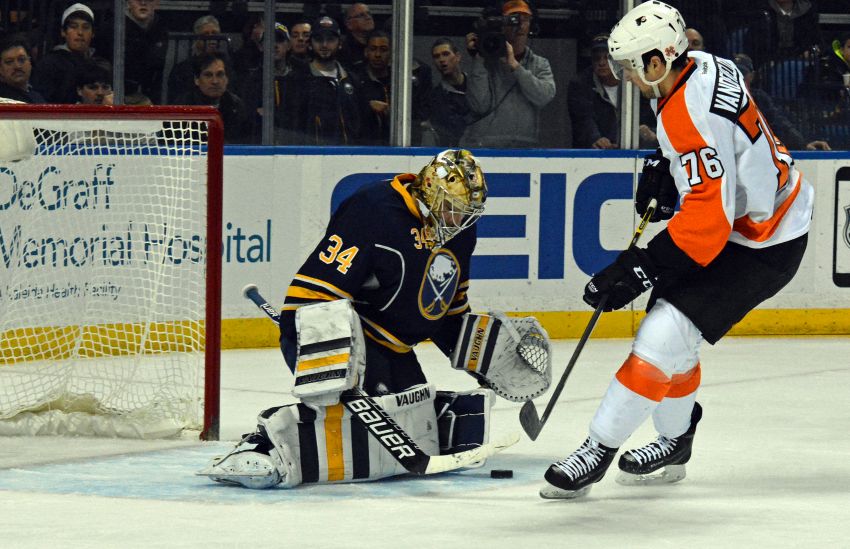 BUFFALO – There was no easing Zach Bogosian into the lineup or letting him get acclimated to the Sabres’ systems. Coach Ted Nolan threw the aggressive defenseman headfirst into the fray, skating his newest addition a game-high 24 minutes, 49 seconds in Sunday’s 2-1 loss to the Philadelphia Flyers.

“That’s the way I like to play,” Bogosian said. “I felt good to get out there.”

Bogosian, a key piece in Wednesday’s blockbuster trade with Winnipeg, experienced some butterflies at the beginning of his Sabres debut. Then adrenaline kicked in for the 24-year-old.

“I try to bring the same style every night,” said Bogosian, who was paired with Andre Benoit against the Flyers’ top line.

Nolan said Bogosian was “exactly what we ordered.” The Sabres sorely need someone to replace the big minutes Tyler Myers, who was dealt to the Jets, played each night.

“That’s the type of play we want to get to and maintain and have a whole group doing the same thing,” Nolan said. “We’re starting to get bits and pieces of it.”

Nolan added: “He was kind of fast-tracking, fast-learning as we went. The players were really good to help him along. Any time you have a competitive spirit you do well.”

But Bogosian’s presence couldn’t help the Sabres win before the 18,759 fans inside the First Niagara Center. They looked rusty early on following five days off, getting outshot 15-5 in the first period and falling behind 1-0 when Matt Read tipped in Wayne Simmond’s shot at 3:19.

The Sabres got going in the second period, pumping 11 shots on goal and tying it on Nikita Zadorov’s power-play goal, their first five-on-three score since March 23, 2013. Neuvirth stopped a breakaway earlier in the power play.

“I thought we were just rusty in the beginning,” Nolan said. “We got our legs underneath us in the second period. I thought we played well.”

“Definitely lost my eye on the puck,” Neuvirth said. “It was a quick play around the net. I’d definitely like that one back.”

Still, the Sabres held the Flyers to two scoring chances in the third period, Nolan said.

“I’m not too sure how much better we can play (overall),” he said.

Meanwhile, if Neuvirth seizes his opportunity, he could become the Sabres’ starting goalie. With Jhonas Enroth gone, the next two weeks are basically an audition for the 26-year-old Czech. Some strong games could convince the Sabres to offer him a new contract.

“He played well, especially in the first period, he really kept us in the game,” Nolan said.