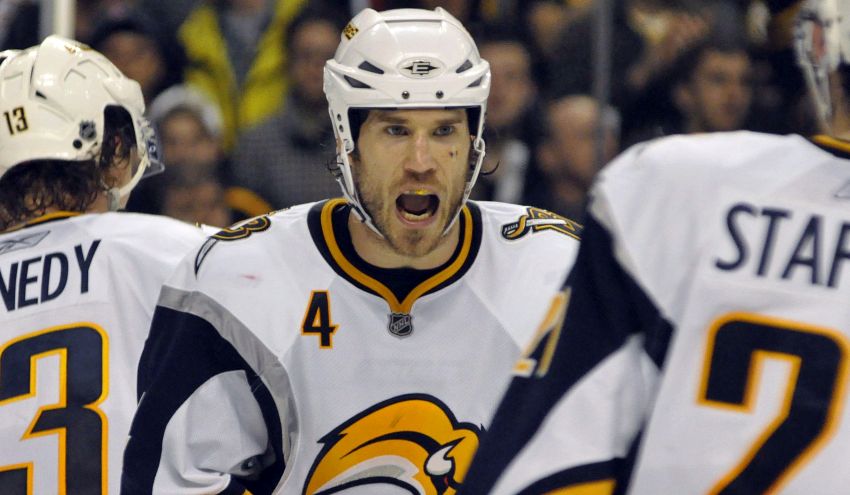 The Sabres made the playoffs in both of Steve Montador’s seasons. ©2015, Dan Hickling, Olean Times Herald

BUFFALO – The memories brought a warm smile to Mike Weber’s face. As a youngster trying to crack the NHL four years ago, Steve Montador mentored Weber. The Sabres defensemen often spent plane rides and meals together talking about hockey and life.

Montador, who played with the Sabres from 2009-11, was found dead Sunday morning in his Mississauga, Ontario, home, according to multiple reports. He was 35. Police do not suspect foul play.

“Monty will probably go down as one of the best teammates I’ve ever had,” an emotional Weber said Sunday before the Sabres played the Philadelphia Flyers inside the First Niagara Center.

Montador played 571 games over 10 seasons. He last played in the NHL with the Chicago Blackhawks in 2011-12 before a concussion ended his season. He retired last season after playing in the KHL.

“It’s just one of those things where you can’t believe this is real,” Weber said.

He added: “There wasn’t one person he didn’t touch or wasn’t available for. That’s what makes him special.”

Montador’s varied interests made him a unique personality. He went on a missionary trip to Africa, was involved with the NHL Players’ Association and took online college classes while playing. He was a go-to quote for reporters.

“He was always keeping busy,” Weber said. “I can remember him doing homework on the plane. … He was just a person he was always learning, always adapting, always just there for us.”

Montador was there for Weber as he worked his way into the lineup.

“He would sit there for whole plane rides sometimes and just talk to me about his situation, where he came from, the things he had to work through to make it to become a regular in this league,” Weber said. “Just little things.”

Whatever the problem or wherever the conversation went, Montador always had time, Weber said.

“The things that he’s done and accomplished, you could sit there and you could have a whole meal or a whole day, just sit there, and he would just tell you and talk to you and story after story,” he said. “Those stories are missed after he was traded.”

After the Sabres traded Tyler Myers and Drew Stafford to Winnipeg last week, Montador contacted some former teammates to see how they were feeling.

“That’s a guy that’s been removed here for a while, still cares about the guys in the room,” Weber said. “You don’t know how to explain it when someone’s just gone.”

On the ice, Montador was often the Sabres’ best defenseman, showcasing an aggressive style with some offensive punch.

The Sabres made the playoffs in both of Montador’s seasons, their only appearances in the last eight years.

“He was a type of player that on the ice he kind of did it all,” Weber said. “We used to laugh about it, sometimes Monty’s got to go. … He’d pick up that puck in the D-zone and he’s just, ‘Go.’ In the room, he was a great voice, a calming voice.”

The Sabres released the following statement: “The Buffalo Sabres were deeply saddened to hear about the passing of Steve Montador. Steve was a passionate hockey player, a valued member of the Sabres family and a highly respected individual off the ice. Our thoughts and condolences are with Steve’s family and friends during this difficult time.”

The team held a moment of silence for Montador before the game.