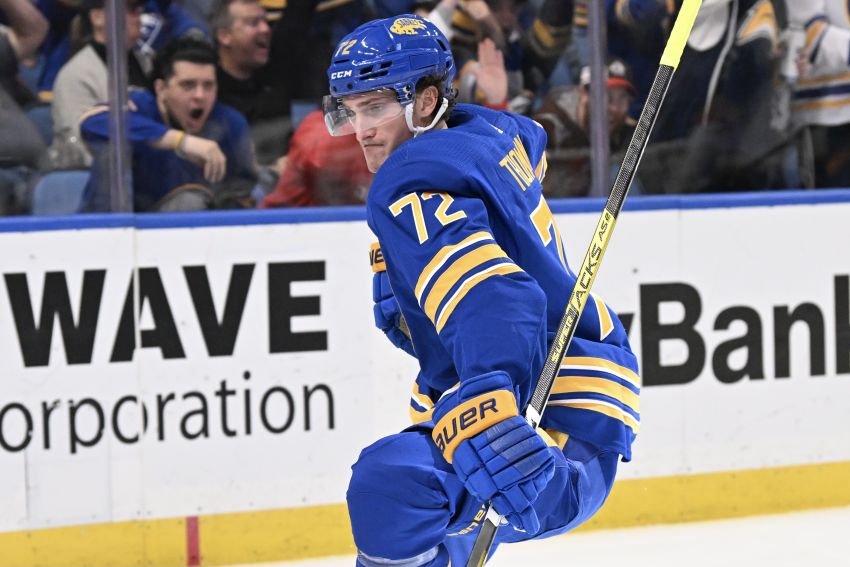 BUFFALO – When Sabres center Tage Thompson learned he had earned his first selection to the NHL All-Star Game, he reflected on his long, arduous journey to one of hockey’s premier events.

While Thompson, 25, made his big league debut with the St. Louis Blues in 2017, he struggled for years to secure regular duty and reach his vast potential. He endured demotions, a season-ending injury and other setbacks before enjoying a 38-goal breakout campaign last year.

The 6-foot-6, 220-pound Thompson has morphed into a superstar this season, scoring 30 goals and 55 points in 36 contests, dynamic numbers that ranked second and third in the NHL, respectively, entering Friday’s games.

“It’s been a tough journey, tough road, and I’ve definitely faced a lot of adversity along the way,” Thompson said following Friday’s practice at KeyBank Center. “So I think it just makes you grateful for where you’re at in your career now. It makes you not want to take things like this for granted. So just something I’m going to be able to enjoy, something that I’ve worked for. So it’s going to be a rewarding feeling.”

Participating in an NHL All-Star Game can be a rewarding experience and boost a player’s development. Being picked last season, for example, helped Sabres defenseman Rasmus Dahlin realize he belonged among the game’s elite.

“It’s actually going to help him as it did Dahlin last year,” Sabres coach Don Granato said of Thompson, whom he informed of his selection on Thursday. “We’re all considering him among some of the elite in the league, and when moving into that peer group and you go through an All-Star experience, you get closer to the realization.

“And as long as you’re the person, the personality type that works hard, that’s a really powerful, productive bonus. And it worked very well for Dahlin last year.”

The youngsters won’t play until next week.

Kulich, 18, stood out for the Czechia, scoring seven goals – the tournament’s second-highest total – and nine points in seven games. His overtime goal on Wednesday against Sweden sent his country to the gold medal game, which it lost to Canada.

Another Sabres prospect, forward Noah Ostlund, recorded one goal and four points in seven games for Sweden at the tournament. Ostlund, 18, is playing at home this season.

“That tournament is the elite of the elite, the same age bracket, so you can see where they kind of fit in with the group of players that are entering different organizations over the next few years,” Granato said. “We’re pretty excited about those three and their performance.”