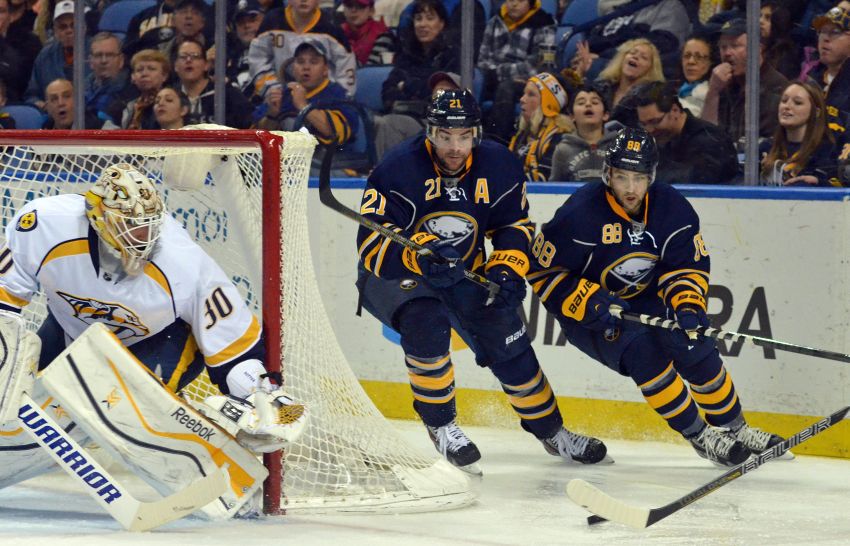 BUFFALO – It was just about Ted Nolan’s only option for another goal. So the interim Sabres coach kept utilizing his top line throughout Tuesday’s disappointing 4-1 loss to Nashville.

“There was only one line basically going,” Nolan said following the game inside the First Niagara Center. “You’re not going to win too many games doing that.”

While the trio couldn’t score, the players buzzed around Predators goalie Carter Hutton all night. They’ve been showcasing some strong chemistry during two games together.

“They moved the puck in and out,” said Nolan, whose team has two goals during a three-game losing streak. “Drew’s really trying to take the leadership role we lost on this team. We’ve lost some veteran players, so he’s embraced stepping up. Tyler Ennis, he’s been good every game since I’ve been here. … Conacher adds a little different element to it. He’s a feisty little guy also. So they had a good one.”

Conacher, a waiver addition from Ottawa last week, hasn’t scored since Dec. 28, a 23-game drought. But the 24-year-old looks re-energized with the Sabres. In his debut Sunday, he created Stafford’s goal by deking Chicago goalie Corey Crawford out of the net.

“It makes it pretty easy for me to get confident out there,” Conacher said about receiving top-line duty. “They’re guys that can find you on the ice at any given time. I think as long I just make room for them that we’ll make things happen.”

Conacher’s the same age and an inch shorter (5-foot-8) than Ennis, someone he “looked up to” while starring at Canisius.

“Small guys kind of stick together,” said Conacher, who replaced the traded Matt Moulson. “It’s been a great experience with him so far. We get along off the ice as well, which is good. I think as the year goes on we’ll get stronger on the ice together and hopefully that chemistry builds, leads into a good summer. I want to be back here next year, so I got to show them I can play with those guys.”

Stafford, Ennis’ right wing much of the winter, didn’t know anything about Conacher.

“We haven’t had much time to practice,” said Stafford, who has eight goals and 14 points in his last 15 games. “Just watching him, he’s a highly skilled, quick type of player just like Tyler. Both of them, like Teddy said, they play with a little bit of vinegar. They got a little bit of an edge to them. Hopefully, we can try to build some chemistry.”

Nolan wasn’t happy with Wednesday’s practice, so he bag skated the Sabres – that’s wind sprints, no pucks involved – and left the ice so players could discuss what had just happened, according to reports.

“I don’t really care what position you’re in or what your skill set is or anything like that,” Nolan told reporters before the Sabres left for tonight’s game in Carolina. “What I care about is the work that you put in and the effort that you put in. We didn’t put the effort in at the beginning of practice and habits are easy to form, good or bad. We have to avoid those bad habits and get them out early. We’re still professional people here.”

Starting tonight against the Hurricanes, the Sabres play seven of their next eight games on the road.

“It’s a time for us to really come together as a team,” Stafford said. “We’re going to be spending a lot of time together in close quarters. It’s going to be up to us to drag ourselves out of this.”