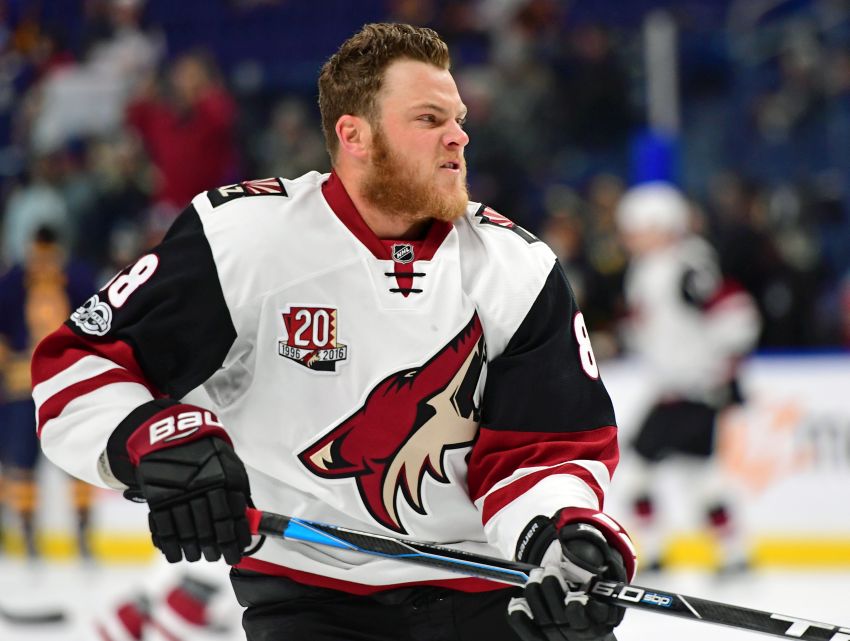 BUFFALO – For 63 games over five months last season, Jamie McGinn had a blast here. The winger showcased his versatility, scoring 14 goals all over the Sabres lineup. He played with Ryan O’Reilly, his buddy from Colorado, and made another friend for life, Jack Eichel.

“I was having fun,” McGinn said this morning after the Arizona Coyotes prepared for tonight’s tilt inside KeyBank Center. “You’re … enjoying being out there. You’re with your best buddy on the team, and when things are tough, you have someone to talk you through and help you out along the way and help each other out. …

“I kind of just flew under the radar.”

But McGinn, 28, was set to hit unrestricted free agency last summer. The Sabres didn’t want to re-sign the veteran – there were no offers, he said – so they traded him to Anaheim before the deadline.

“I made it very clear when I was in Buffalo I loved it,” he said prior to his first visit back. “We had a great locker room, still have a lot of friends over there. But it’s the business of the game.”

Counting the playoffs, McGinn scored 10 goals for the Ducks. Following their first-round loss, he signed a three-year, $10 million contract with the Coyotes on July 1.

McGinn hasn’t found much of a fit with last-place Arizona. He has only nine goals and 15 points in 51 games. He was even a healthy scratch last week.

“I’ve enjoyed it,” McGinn said. “(The) numbers aren’t exactly where I want them to be, nor the wins, so it’s a growing process. You just try to be as positive as you can, help out the young guys.”

Eichel was one of the young guys McGinn helped out last season after he arrived from the Avalanche with O’Reilly. Eichel and McGinn reconnected for dinner Wednesday night.

“You know you’re going to be friends for life when you don’t miss a beat,” McGinn said. “You’re joking around right away, you just enjoy each other’s company.”