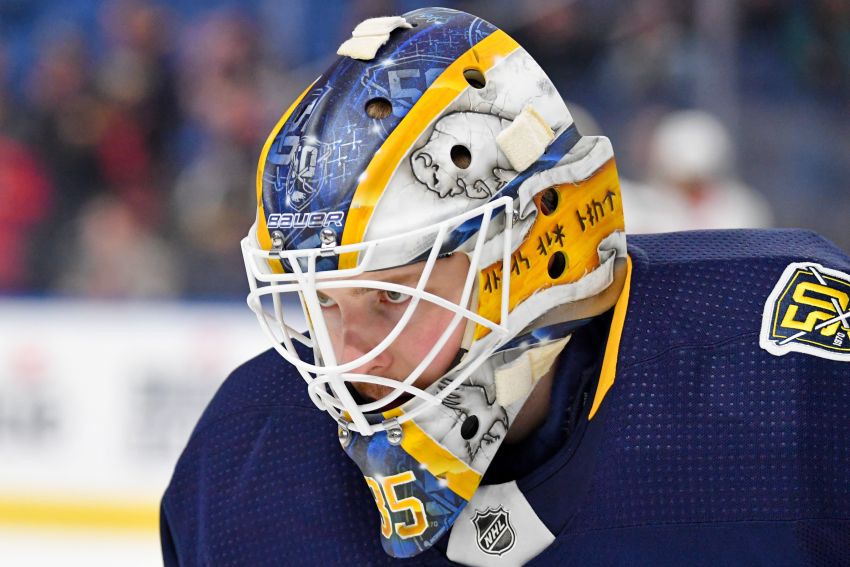 “He’s got some skates on now, which is obviously an important step to be taking, and let’s see how it goes,” Krueger said this afternoon inside KeyBank Center. “But we are optimistic about the way rehab is going at this point. There’s been no setbacks and he’s on schedule.”

When Ullmark was injured, the Sabres said he would be sidelined three to four weeks.

With Ullmark out, goalie Carter Hutton has handled most of the action. Hutton, however, has been nursing a lower-body injury.

But instead of giving him a maintenance day today, the Sabres used an extra goalie – former Geneseo netminder Brad Hawayek – to lighten Hutton’s workload during practice.

“We’re pleased to see him feel pretty good through the skate today,” Krueger said of Hutton. “It’s certainly not a serious thing. We think it’s more nagging. We’re optimistic about the way he reacted out on the ice today.”

In other news, Sabres captain Jack Eichel and winger Kyle Okposo both had maintenance days today.

“We don’t see it as serious,” Krueger said.

Krueger also said winger Michael Frolik skated on his own today after missing the last two games because of illness.

“We expect him back in the lineup tomorrow,” Krueger said.