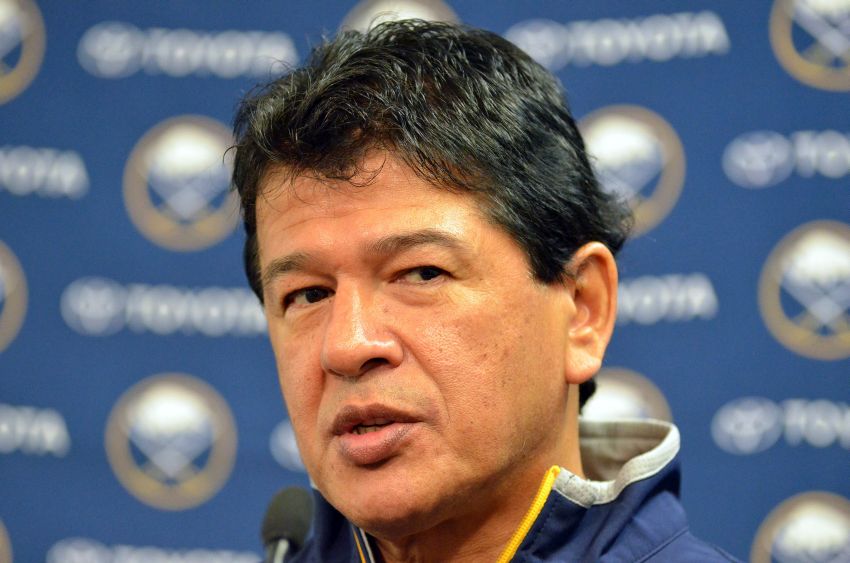 HAMBURG – Following the most trying season in franchise history, Ted Nolan found some time to recharge this summer. Not a lot, however. The Sabres coach spent much of the offseason preparing for the upcoming campaign and honoring commitments around Buffalo.

“A summer of getting out with the old and beginning with the new,” a smiling Nolan said Tuesday at the Wanahak Country Club prior to the team’s annual golf tournament.

Two days before training camp opens, the new beginning was visible all around Nolan. Brian Gionta and Josh Gorges, two high-profile acquisitions, walked in minutes before Nolan. Matt Moulson, who re-signed after a short stint in Minnesota, stopped by to shake Nolan’s hand.

“It was a great summer for us,” Nolan said. “I’m really looking forward to hopping on this ice. This summer was nice to get a break, but you’re also chomping at the bit to get going again.”

Nolan will get going beside a new coaching staff later this week. The Sabres fired Ron Rolston’s old staff after the season, so Nolan hired Hockey Hall of Famer Bryan Trottier, Tom Coolen, Danny Flynn and Arturs Irbe on August 4.

“No disrespect to anybody that was here before, but I think that comfort zone and finding that right chemistry is really important,” Nolan said.

“Coming up with the group that we had here was taxing, but at the end it was well worth it,” Nolan said.

Of course, Trottier, who won six Stanley Cups and scored 524 goals and 1,425 points during an illustrious playing career with the Islanders and Pittsburgh, is the biggest name.

Earlier in the offseason, Nolan phoned Trottier to ask his old friend about a candidate he was considering for one of the vacant positions.

Then a funny thing happened.

“I started asking him about certain things,” Nolan said. “I felt there was some enthusiasm in his voice about doing something that he grew up doing very well.”

Eventually, “one conversation led to another conversation,” Nolan said. Trottier hasn’t coached since 2002-03.

“It’s like riding a bike,” he said. “I don’t care if Bryan didn’t coach for 50 years. He still knows how to hop onto that bike and ride and win.”

Naturally, someone with Trottier’s stature has a presence around a team.

“When Bryan Trottier walks into a room, all the players are going to listen,” Nolan said. “His experience about how to win (is terrific). People can talk to you about how they think they could win is one thing. Hearing from a person that actually won and knowing how to do it is a lot different.”

Nolan added: “I’m sure glad when I popped the question if he’d be interested, he said, ‘Let me think about it for a couple days,’ and that’s all it took.”

He took something away from watching his son, Jordan, win his second Stanley Cup with the Los Angeles Kings in June. Nolan said he “followed every minute of it” and watched the Kings, the NHL’s bellwether organization, closely.

“You get to watch it firsthand and see what they do and how they develop and the meetings that they have and the practice plans that they have,” Nolan said. “We’re no different from any other organization in the world. You don’t want to try reinvent the wheel; what you do is try to steal ideas from other people. They have some good ideas down there we’ll hopefully try to incorporate.”

More from Nolan on the coaches:

– Coolen: “He’s got a couple master’s degrees in coaching philosophies.”

– Irbe: “He’s more of a smaller-structured goalie like the goaltenders we have here.”

“They’re all good gentlemen,” Nolan said. “One thing I really find in life in general, everybody needs structure and discipline.”