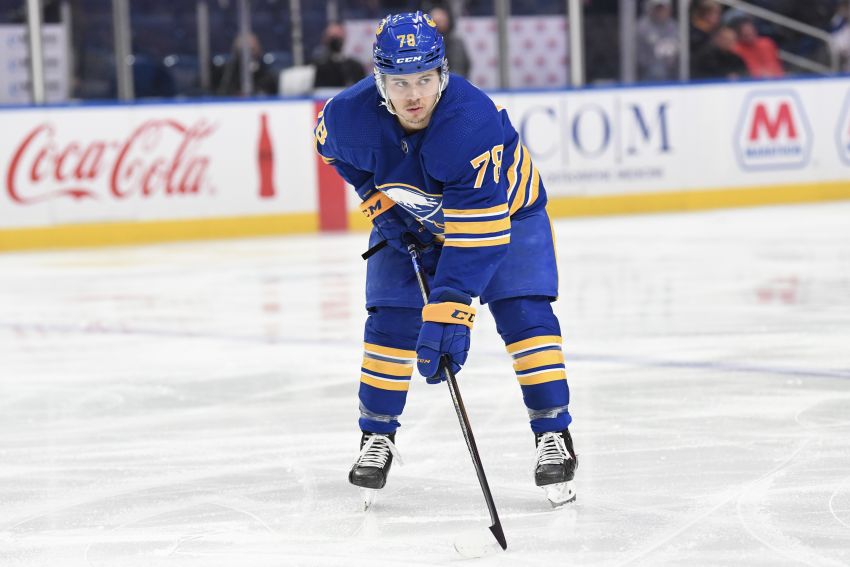 BUFFALO – Of the seven defensemen the Sabres have kept all season, only two, Rasmus Dahlin and Mark Pysyk, have played more than 30 games.

Defensemen, of course, are often at a premium. The rugged nature of the position makes them susceptible to damage.

But if all goes well, the Sabres could have their full blue line for their next game, Tuesday’s contest against the Tampa Bay Lightning.

Jacob Bryson, out the last four games while in COVID-19 protocol, and Robert Hagg, out the last six contests with a lower-body injury, both returned to practice Friday. Colin Miller played in Thursday’s 3-2 loss to the San Jose Sharks after an undisclosed injury sidelined him three games.

The defensemen on the ice Friday inside KeyBank Center were the seven on the team’s opening night roster. Fitzgerald is still in protocol while the Sabres on Friday sent Prow back to the Rochester Americans.

When everyone’s healthy, the Sabres have an intriguing group of defensemen. Dahlin and Jokiharju are solidifying themselves as a strong No. 1 tandem. Bryson, meanwhile, has established himself as a two-way, puck-moving defender.

“Our young guys definitely excite me,” Granato said. “Brys, Dahls, Joki, those guys have continued to get better. What we put in front of them, they internalize well and compete well to improve in those areas. They target very well. I’m excited about their future.”

The Sabres also have four veteran defensemen – Hagg, Miller, Pysyk and Will Butcher – on expiring contracts. Still, the way some of them have performed this season, most notably Hagg and Pysyk, the Sabres might be interested in re-signing them.

Granato said he wants the veterans “to be a stabilizing presence.”

“To be able to play a real simple, hard, direct game,” Granato said.

A healthy blue line could push Butcher or Miller out of the lineup.

Bryson, 24, went into protocol Dec. 29 and said he had symptoms the first few days.

“They slowly went away but my tests kept coming back positive,” Bryson said.

Meanwhile, Hagg, 26, said he has been battling his injury all season.

“Just tried to deal with it but at one point I didn’t feel it was fair to me or to the team to keep pushing and keep trying,” said Hagg, who also missed three games in early December before returning for two.

He added: “I feel much better now than I did during the whole season.”

Losing the rhythm of the season can be difficult. Bryson played 29 of the first 30 games, averaging 19 minutes, 47 seconds of ice time. But COVID postponements, Christmas break and time in protocol has kept him from playing since Dec. 17.

“It’s tough,” Bryson said. “I think I had 16 days off doing nothing with Christmas break and COVID. So it’s tough sitting at home and watching on TV and not being able to be around the guys.”

Fresh off a strong rookie campaign in which he played 38 games, Bryson has entrenched himself in the lineup, becoming reliable presence. However, in the weeks before he left the lineup, he felt his play was slipping a bit.

“I was playing good hockey but I think I was playing even better at the start of the season and I just got to get back to that,” Bryson said. “Making less and less mistakes and just bringing my A game every night. I think it’s more of a consistency thing.”

So Bryson said he examined some video during his break.

“If I can get back to where I was, I think, the first 10, 15 games, I was playing my best hockey confidence-wise,” said Bryson, who has compiled seven assists and a minus-11 rating. “I think I was super confident with the puck and without the puck.”

Meanwhile, Hagg, who’s in his first season with the Sabres, has established himself as their top shot blocker and one of their best penalty killers. Despite missing nine games, his 56 blocked shots still lead the team.