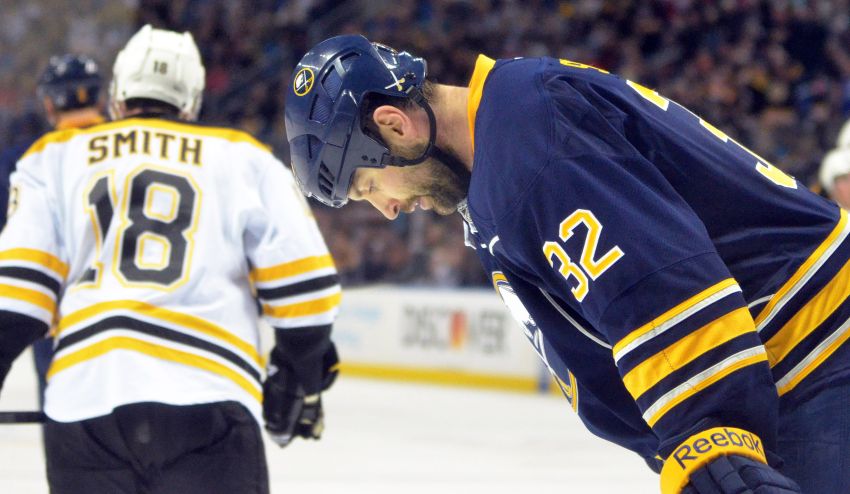 John Scott and his teammates have endured a lot this season. ©2014, Dan Hickling, Olean Times Herald

Mercifully, 193 days after it started, the most tumultuous season in Buffalo Sabres history will end around 7:30 p.m. Sunday inside the First Niagara Center.

The finale can’t come quickly enough for the reeling Sabres, losers of six straight games and 17 of their last 19.

In a season filled with turmoil, the Sabres endured arguably their roughest game this afternoon in Boston, losing five more players to injury, including goalie Matt Hackett, in the 4-1 setback to the Bruins.

Eleven players are injured right now. Four goalies have gone down in the last 16 games.

Hackett suffered a ghastly injury 8:25 into the third period when Jamie McBain knocked Boston’s Torey Krug into the goalie, making his right leg bend awkwardly. He stayed on the ice for several minutes in apparent pain before being stretchered off.

“It doesn’t look good right now,” Sabres coach Ted Nolan told reporters in Boston. “Wrap him up as best as we can, get him back home, get our doctors to look at him.”

Connor Knapp replaced Hackett, becoming the sixth goalie to play for the Sabres this season, tying the team record from 1988-89. Knapp, who spent most of this season in the ECHL, set a new NHL mark earlier in the day by becoming the ninth netminder to dress for the club this season.

It’s unclear if Knapp will start his first NHL game Sunday. The Sabres also need to find another goalie. They recently sent Andrey Makarov back to Rochester to help the Americans fight for an AHL playoff spot.

The new injuries, according to Nolan:

– After barely three games back, winger Chris Stewart re-injured his right ankle during his first shift.

– Christian Ehrhoff suffered a “mild concussion.” It appeared defense partner Rasmus Ristolainen hit Ehrhoff in the head behind the net.

– Winger Matt D’Agostini tweaked something on his lower body.

The players are out Sunday against the New York Islanders. Expect more recalls from the Amerks, who play Sunday in Cleveland.

With game misconducts to rookie defenseman Jake McCabe and tough guy John Scott, the Sabres finished the contest with only 13 players.

Scott, meanwhile, was tossed with Zdeno Chara for simply talking to the Boston captain. Scott was given a 10-minute misconduct earlier in the game after a little scrum with Chara.

“Some guys are labeled for certain things,” Nolan said about Scott. “They want to get that out of the game. I understand that. Sometimes he’s picked on unfairly. But, hey, that’s just the way it is.”

If you’re keeping track, the Sabres have 147 goals and need five to pass the 1997-98 Tampa Lightning and avoid becoming the lowest-scoring NHL team ever. The hapless Isles are one of only five clubs allowing more than three goals a game.