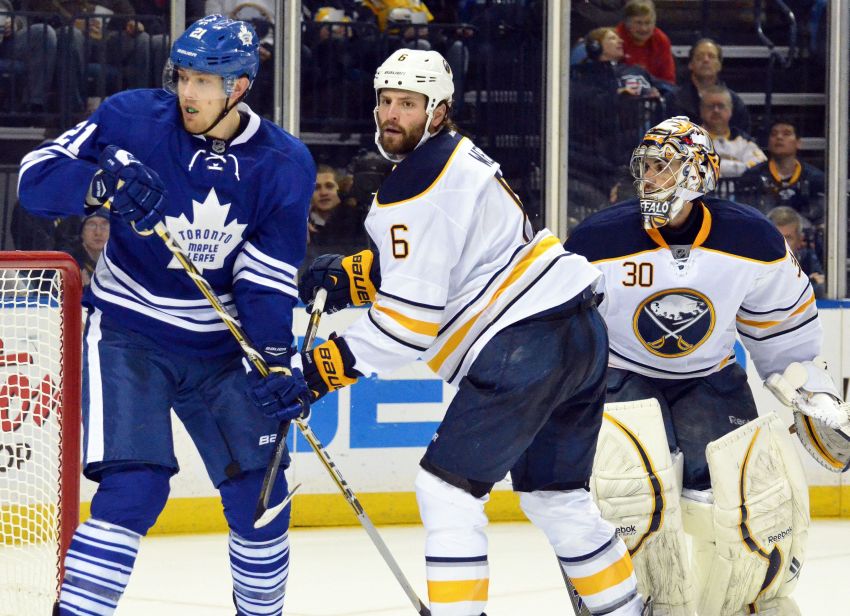 BUFFALO – The cycle repeats each year. Inevitably, Mike Weber begins the season as the Sabres’ seventh or eighth defenseman, a spare part.

Weber sat the first eight games and 20 of the opening 22 contests as a healthy scratch in 2010-11. The 25-year-old watched the first 10 games last season.

Now, pulling Weber from the lineup will be difficult. He usually stays once he gets in.

“It’s always disappointing when you’re not playing,” Weber said Tuesday inside the First Niagara Center. “It’s one of those things you have to stay patient and know that you can do the job when you get in.”

Expect the rugged Weber to skate again tonight in Boston against the rough-and-tumble Bruins.

The Sabres’ tepid response after Milan Lucic ran goalie Ryan Miller on Nov. 12, 2011 in Boston embarrassed them. Miller should start tonight, his first appearance at the TD Garden since the incident.

The tilt could get wild if the Sabres, who muscled up by adding sandpaper winger Steve Ott and tough guy John Scott during the summer, want to send a message.

Weber showcased his fearsome edge Tuesday, compiling 17 penalty minutes and an assist on Mikhail Grigorenko’s first NHL goal while skating 13:15, mostly beside rookie T.J. Brennan, who was also making his first appearance of 2012-13.

Weber immediately fought Mike Brown after the Maple Leafs’ tough guy hit Patrick Kaleta into the boards as the agitator turned, earning the instigator penalty and a 10-minute misconduct.

“Webby was going to be ready,” Ruff said. “I thought the minutes he gave us, he gave us quality. You don’t mind losing that (power play from the Brown hit), no. On a hit like that he did the right thing.”

The right preparation allows Weber to join the lineup and contribute after long layoffs. He’s usually one of the last players off the ice following practice. Sometimes he’s in the FNC riding an exercise bike and working out as his teammates are playing a game.

Still, it’s difficult sitting for weeks at a time.

“He handled it. It’s not easy for any player,” Ruff said. “There’s no good way to handle it. The only thing you can do is make sure that you’re responsible for being ready when you get to play. Mike, he’s a true professional. He stays positive, gets his off-ice (workout) in, gets his on-ice (workout).

“Some players you got to go over and tell them, ‘Listen, it’s time to go to work. Don’t worry about what position you’re in.’ For him, you don’t have to question whether he’s going to work or not work whether he’s playing. He always puts the work in.”

“My preparation never changes from year to year,” Weber said. “So I’ve always got to make sure I’m ready to go and know when I get in hopefully I’m in for the rest of the way.”

Weber could stay in the lineup if he keeps performing well. The supposedly deep blue line has struggled during the Sabres’ four-game losing streak (0-3-1). It’s also starting to get banged up.

Alexander Sulzer, who began the season entrenched as Christian Ehrhoff’s partner, was believed to be a healthy scratch against the Leafs. Tyler Myers looks nothing like an elite defender. Robyn Regehr, whose presence pushed Weber out briefly last season, missed Tuesday’s game (lower body).

“It’s been a real tough couple years always sitting,” Weber said. “We’ve got a great team in here. We’ve always had a great D-corps. So I’ve always just had to kind of stay patient and know that I’m a top-six defenseman and just make the best when I get in.

“I’m not a flashy player. I just keep it simple, try to play a solid game. Our organization does a great job with bringing in great defensemen, great people. So it’s always been a challenge my whole time here. Now it’s nice to get in and hopefully stay.”

The Sabres were off Wednesday.