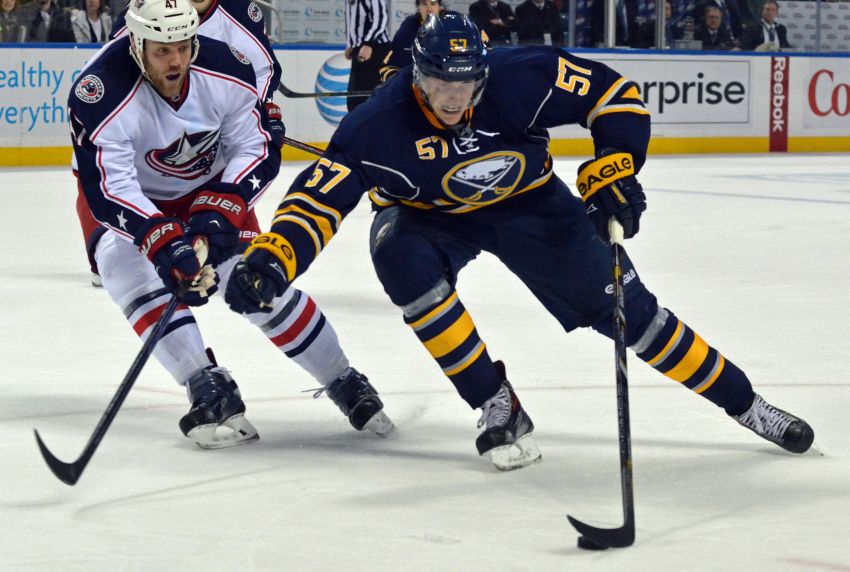 BUFFALO – The signs had been there for months. First, Sabres defenseman Tyler Myers settled down defensively. Then the former Calder Trophy winner recently recaptured his aggressive style, pinching in and swiftly moving the puck all over the ice.

Fresh off perhaps his best game in two years, Myers topped that effort in Saturday’s 4-3 shootout loss to the Columbus Blue Jackets, scoring the first goal 59 seconds into the tilt and the tying power-play goal with 25 seconds left in regulation.

Naturally, Myers scored both goals after zooming into the right circle.

“I think those opportunities are coming as I start to let my confidence grow, start moving my feet more and more,” Myers said inside the First Niagara Center following his 300th NHL game.

Myers kept moving his feet during overtime, buzzing around the Columbus zone.

“He’s unbelievable when he’s wheeling it like that,” said Sabres center Tyler Ennis, who had two assists and was arguably the best forward all night. “He’s almost impossible to stop. He’s so fast.”

“I don’t know which one played better,” interim Sabres coach Ted Nolan said. “I think you could flip a coin and it would probably land on its side. They both played a great game for us tonight.”

Alas, it wasn’t enough, as Ryan Johansen scored the shootout’s lone goal in the third round.

The Sabres also lost a 4-3 shootout Wednesday in Toronto. The Sabres, losers of three straight (0-2-1), are suddenly playing poorly defensively, having allowed three goals in three straight games for the first time since late November.

When the Sabres appear to have finally fixed one problem – their offense has three goals in three consecutive contests for the first time all season – another pops up. That’s why Nolan compared his team’s plight to Whac-A-Mole, a popular old arcade game, on Friday.

Still, there was a lot to like about Saturday’s performance before a capacity crowd of 19,070 fans, most notably Myers, who scored twice for the first time since Nov. 16, 2011.

Matt Calvert tied it again at 12:44. Moulson appeared to put the Sabres up 3-2 24 seconds into the third period, but replays showed the winger kicked Ennis’ rebound past Columbus goalie Sergei Bobrovsky.

“The league is screaming for goals, and also of a sudden, I don’t know how you can kick it and try to stop at the same time,” Nolan said.

Then, with Zenon Konopka off for goaltender interference, Columbus’ Brandon Dubinsky made it 3-2 11:21 into the second period. Philadelphia scored Tuesday after Konopka was whistled for the same infraction.

“You can’t go into the crease and stop,” a perturbed Nolan said. “You have to stop way before then. I mean, two times now. Do it once, OK. But twice, you can’t do that.”

Nolan benched Konopka, who only played 6:20, the rest of the night.

Sabres goalie Ryan Miller made 32 saves, including a scintillating glove stop as RJ Umberger tried to convert a two-on-one attempt.