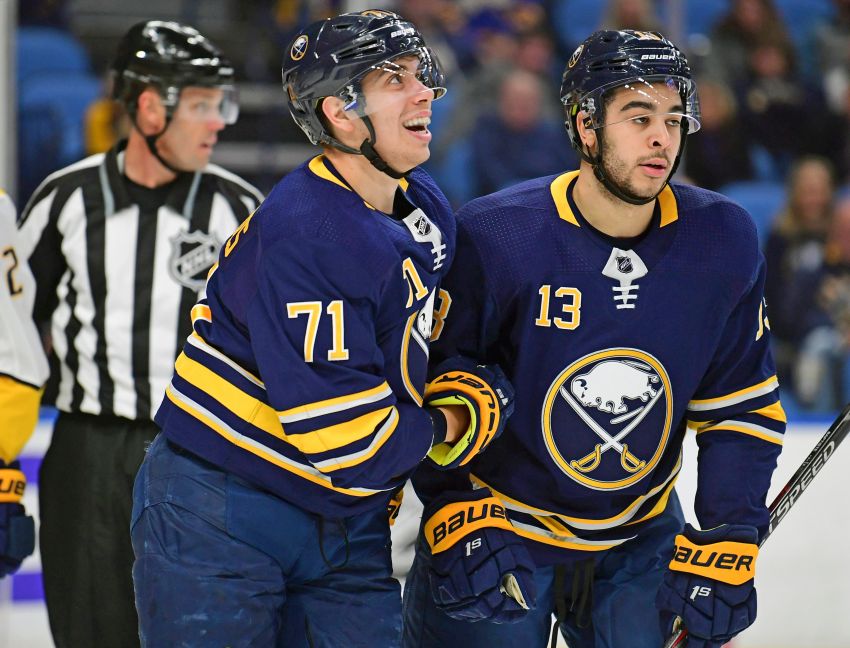 Bailey and Baptiste both played right wing with the Rochester Americans. Meanwhile, Rodrigues, a center these days, mostly skated as a winger.

So while the three prospects became close friends, they never showcased their talents together on the ice until Saturday afternoon.

When Sabres coach Phil Housley formed the line – Rodrigues at center, Bailey on the left and Baptiste on the right – the chemistry they shared was quickly evident.

Baptiste scored the first of his two third-period goals with his new linemates, buoying the Sabres’ 5-3 come-from-behind win against the Chicago Blackhawks. In Monday’s 4-0 loss to the Nashville Predators, the trio utilized its speed to create offense and forecheck.

Chances are Housley will keep the line intact for tonight’s tilt against the Arizona Coyotes at KeyBank Center, a meeting of the NHL’s two worst teams.

“We’re just keeping it simple and using our speed,” Rodrigues said Tuesday. “We all have kind of the same approach of just wanting to get pucks to the net and kind of hound the net, and we’ve been doing a pretty good job of that.”

At the 72-game mark, on a team certain to undergo a significant offseason overhaul, it can be difficult to see lines that have a future. It’s often hard to peg the Sabres’ bottom trios because a few look like the third or fourth lines.

Yes, their time together has been short. But Housley could keep calling on Bailey, Baptiste and Rodrigues next season or beyond.

The youngsters all possess speed, probably the most important asset in today’s NHL.

“They’re both really fast wingers and I like to make plays,” Rodrigues said. “So we’re trying to play fast hockey, put pucks in space and let them skate into it. After that, once we get in the O-zone, just funneling pucks to the net. We’re not trying to be too cute. We’ve gotten very close, especially the last game.”

Bailey said his line is “all on the same page.”

“We’re doing the things we know we need to do to be successful, and that’s keeping things simple, getting on the forecheck and making it a tough night for the other team’s D,” he said.

To Baptiste, when you’re close to someone off the ice, you develop chemistry on it.

Baptiste and Bailey, both 22, lived together during their first two seasons in Rochester and have known each other since the Sabres drafted them one round apart in 2013. Bailey was in Rodrigues’ wedding last summer.

“We know each other so well off the ice, that on the ice, we kind of know each other on the ice,” Baptiste said. “Instinctively, I know what Justin’s going to be doing because he plays a similar style to me. Evan, he makes such great plays out there, he’s the one that finds pucks.”

Bailey said: “We know exactly most of the time what each other’s going to do so we’re one step ahead of the defense. I think it definitely makes a difference when you’re playing with guys you have chemistry with.”

Rodrigues said the familiarity makes you “hold onto your stick a little bit looser.”

“You trust them and you’re not worried to make a mistake,” he said. “We have each other’s back. I think it also gives you a little bit of a boost, it’s a little bit of fun and it puts a bit of extra giddy-up in your step.”

Thanks to his speed, smarts and versatility, Rodrigues, 24, seems to have locked up a spot for next season. If he hadn’t broken his hand during the preseason, he likely would’ve stayed up all year.

But these final 10 games are critical for Bailey and Baptiste, whose entry-level contracts expire following the season. The Sabres also have a totally new regime, the third since they were drafted.

“I wasn’t sure whether or not I’d get back up here this season so I want to make sure, going into these next few games, that I leave everything I have out there and leave the best impression I can on the coaches,” Bailey said.