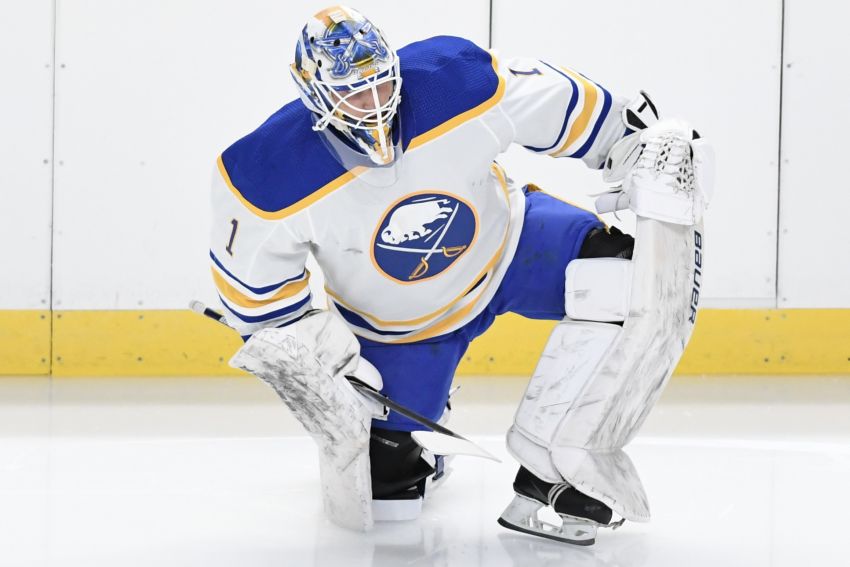 BUFFALO – As expected, the struggling Sabres will change goalies tonight against the Anaheim Ducks, awarding prospect Ukko-Pekka Luukkonen his first start this season.

Having played four games late last year, Luukkonen developed a feel of the NHL. The Finn performed well, winning his debut and posting a .906 save percentage.

“The hope is when you put him in there’s an element of relaxed to him, a comfort,” Sabres coach Don Granato said following this morning’s optional skate inside KeyBank Center. “And we won’t know that until he’s out there and plays.”

Luukkonen, 22, will be the fifth goalie to start a game for the Sabres this season. Right now, goalies Craig Anderson (upper body), Dustin Tokarski (COVID-19 protocol) and Malcolm Subban (undisclosed) are all sidelined. Aaron Dell, who will back up Luukkonen tonight, is winless this season.

The Sabres have allowed 20 goals during their three-game losing regulation streak, so Luukkonen, who has experienced an inconsistent season in the AHL, has his work cut out for him.

“I’m just very confident with him back there,” Sabres defenseman Jacob Bryson said. “He’s pretty sound positioning-wise and he’s good when he plays the puck. And with him back there, it’s just I’m confident he’s going to make that save and if someone makes a mistake, he’s there to bail us out every time.”

In other goalie news, Granato said Subban, who was injured in Saturday’s 6-2 loss to the Carolina Hurricanes, skated on his own this morning.

“So that is really good news and definite progress,” Granato said. “It ruled out a lot of other potential injuries that they were concerned with, as did the imaging he had once we got back. So that’s good news and I think we’re in for ever better news tomorrow.”

Meanwhile, defenseman Robert Hagg, who sat out Saturday’s game to rest an undisclosed injury, will be scratched again tonight. Hagg did not skate this morning.

“He was sore in practice yesterday,” Granato said. “We wanted him in the skate.”

Here are the lines and pairs from Monday’s practice.

Will Butcher and Colin Miller