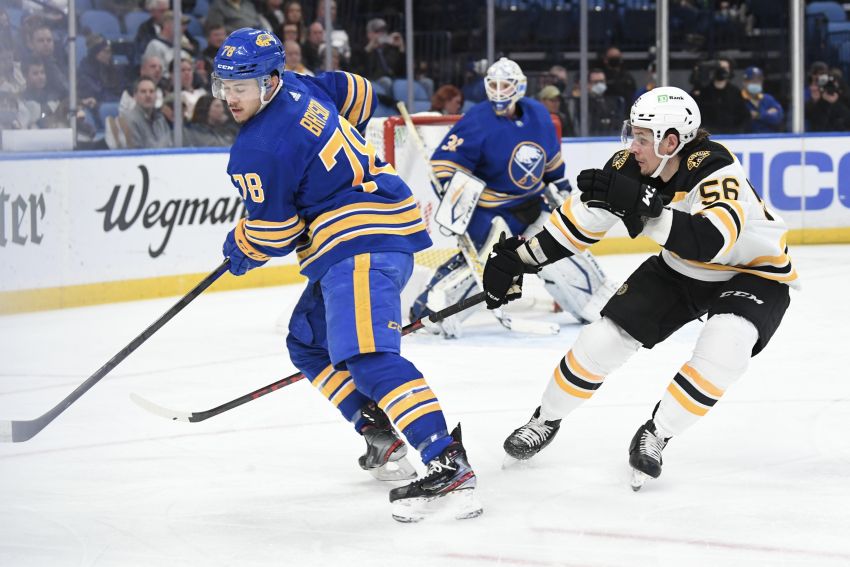 BUFFALO – Think about it, do kids grow up dreaming of scoring goals or playing defense? Hockey players develop an offensive mentality at a young age that remains with them.

“Every player in the NHL wants to play offense,” Sabres defenseman Jacob Bryson said prior to Tuesday’s 2-0 loss to the Anaheim Ducks at KeyBank Center. “No one likes to play defense.”

Bryson, who knows he can’t shirk his defensive duties, loves the aggressive, fast-paced style Sabres coach Don Granato likes to play. Instead of sitting back, the Sabres try to dictate the pace, and it shows on the scoreboard.

Having scored 69 goals in 24 games entering Tuesday’s contest, 2.8 an outing, the Sabres were on pace to register 235 goals this season. That would be their highest total since 2010-11, when they scored 240 times.

“We’ve been scoring enough goals to win games,” Bryson said. “It’s just there’s too many going in the back of the net.”

Having allowed 90 goals entering the night, the Sabres were on pace to let in 308 goals, a massive number that would tie the franchise’s all-time high set during an 80-game season in 1986-87.

They had allowed 20 goals in their last three games prior to Tuesday’s contest and at least five in seven of their previous nine outings.

It can be easy to blame the defensemen and goaltending. But Granato wants the team’s forwards start showing more respect for defensive detail.

“We have … a confidence on offense, an appetite or an excitement for offense that produces a lapse in defensive concentration,” Granato said. “And it’s simple stuff that we’re giving up, a good opportunity against up. And we have to buckle down there.”

Still, Granato sees plenty of positives in the Sabres’ penchant for offense. If they simply sat back and played it safe, their raw talent would never develop any skill.

Granato made it clear he still demands defense from his players.

“I’m not throwing defense out by any means and … I’m fine winning a game 1-0, but not at the sacrifice of developing,” he said. “So we’ve pushed guys, and I guess if you play the game and you pay attention to all the details of defense, you’re not improving anything offensively.

“And our guys just haven’t found the balance of that, but they’re the right guys. We’re seeing skill develop and now every day we’re pushing the skill and we got to keep our thumb on them and say, ‘Hey, you better pay attention to this, too.’ And I’d rather have it that way than just trying to put five men and say, ‘Block shots’ and never get anything better.”

Granato said Sabres goalie Malcolm Subban, who was injured in Saturday’s 6-2 loss to the Carolina Hurricanes, his Sabres debut, skated on his own Tuesday morning.

“So that is really good news and definite progress,” Granato said. “It ruled out a lot of other potential injuries that they were concerned with, as did the imaging he had once we got back. So that’s good news and I think we’re in for ever better news tomorrow.”

The Sabres also play at home Friday and Saturday, so perhaps Subban could play one of those games.

Meanwhile, defenseman Robert Hagg, who sat out Saturday’s game to rest an undisclosed injury, was scratched again Tuesday. Hagg did not skate prior to the game.

“He was sore in practice yesterday,” Granato said. “We wanted him in the skate.”

The Sabres went with the same 18 skaters for the second straight game, meaning winger forwards John Hayden and Mark Jankowski were scratched.