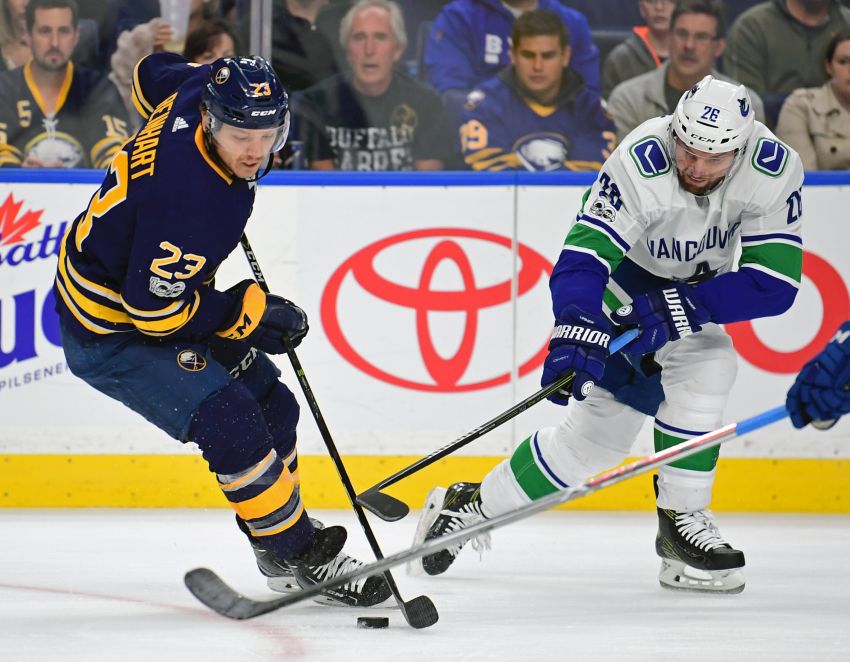 BUFFALO – In an otherwise glum season, the Sabres’ power play emerged as the NHL’s best a year ago, converting 24.5 percent of its opportunities.

Considering the Sabres kept their key personnel and hired coach Phil Housley, it wasn’t crazy to think they could become even more potent this year.

After all, few players in NHL history have performed better. Housley amassed 609 of his 1,232 points on the power play during his 21-year career as a defenseman.

So the Sabres’ early-season struggles have been surprising. Right now, having scored only six goals in 52 tries, their power play ranks 29th in the 31-team league.

Four fruitless tries in Tuesday’s 3-1 win against the Washington Capitals dropped them to a paltry 11.5 percent for the season.

The Sabres haven’t scored in their last 10 tries and have converted just one of their last 25 opportunities over an eight-game stretch. They scored three power-play goals – half their season total – Oct. 17 in a 5-4 overtime loss to the Vegas Golden Knights.

Incredibly, since they’ve allowed a whopping six short-handed goals and scored six times up a man, their power play is essentially at zero after 15 games.

“We’re overthinking,” said Sabres center Sam Reinhart, who scored 18 power-play goals in his first two years but has only one this season. “It’s getting frustrating. We had a couple good looks early on (Tuesday). It’s tough to get in a rhythm right now.”

Of course, there are different philosophies and terminologies this season, Sabres winger Kyle Okposo said.

“But in essence it’s the same,” he said. “If we were top 10 in the league right now, we wouldn’t be pressing so hard, wouldn’t be trying to change every little thing. I think the expectation from us, from the kind of the unit we had last year, the guys that have been on the power play, is to be No. 1 in the league.”

Housley said the power play can be a reflection of the team’s five-on-five play. Not surprisingly, the 5-8-2 Sabres have often struggled at even strength.

So the Sabres have tinkered, trying different combinations and a slew of new players. They recently reunited last season’s top unit of Okposo, Reinhart and Ryan O’Reilly up front and Jack Eichel and Rasmus Ristolainen at the points.

“It’s nice when you get a unit together and you get some cohesiveness and you get some chemistry with the power play,” Okposo said. “I think that’s a really big thing. In saying that, we need to execute better so we can keep our units together.”

Reinhart said the constant change has been frustrating.

“You look at last year, we went through some spurts where things weren’t working out, but we all kind of stuck together on the units,” he said.

When the power play hits a funk, simply shooting the puck and getting bodies to the net might be the easiest way to ignite it.

“When things aren’t going well on the power play, you aren’t scoring, you shoot everything – just shoot, shoot, shoot, because then that’s going open up all your seams, it’s going to open up the pretty plays and it’s going to soften them up,” Okposo said. “So we just got to really, really get into that shooting mindset and everything’s going to fall into place.”

Housley said he wants to “hammer the message of shooting pucks and keeping it very simple.”

“There’s going to be teams that go through stretches like this during the season where they’re doing a lot of good things and they’re not getting rewarded for it,” he said.

Despite the rough stretch, Okposo believes the Sabres have accomplished some good things on the man advantage.

“Confidence on the power play is a big thing,” he said. “In saying that, it’s not like we’re going out there and having bad power plays. You have a bad power play and you don’t really get set up, you look disorganized and it can kind of hurt the momentum, and we haven’t had many of those lately, maybe one here or there.”

One thought on “Sabres trying to ignite struggling power play”