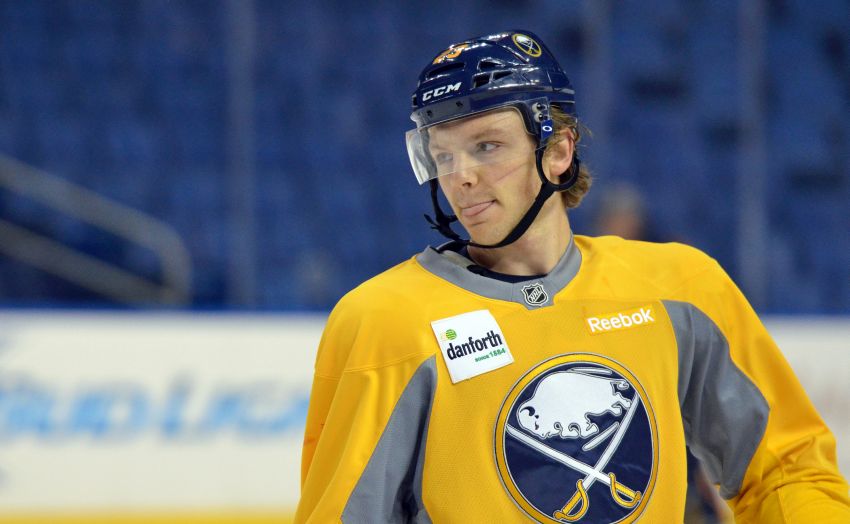 BUFFALO – The Sabres will scratch top prospect Sam Reinhart for the first time tonight against the Boston Bruins.

It wasn’t hard to see this move coming. The slick center, the No. 2 pick in June, has been skating limited minutes on the fourth line. Reinhart played only seven minutes, nine seconds in Friday’s 1-0 loss to Florida.

The 18-year-old has zero goals, two shots and a minus-1 rating in his first five NHL games.

“Why do you sit out anybody?” Sabres coach Ted Nolan said this morning inside the First Niagara Center. “It’s one of those things. He’s a young player and still learning. So we’ll let him watch a game and see how he comes from that.”

The Sabres skated Reinhart on top lines early, putting him between Cody Hodgson and Brian Gionta and Marcus Foligno and Chris Stewart. For the last two outings, however, he played with Nick Deslauriers and Cody McCormick, two grinders.

“I know it’s a possibility,” Reinhart told the Times Herald and Canadian Press this morning. “If that happens, I’m going to go and develop one more year and take that as a positive.”

“Jhonas has been great for us,” Nolan said. “Sometimes goalies get on a roll, you let them roll.”

Flynn, meanwhile, has only played once this season. After playing 79 games last season, Nolan has scratched him four times already.

“It’s not fun,” Flynn said. “It’s tough showing to the rink when you know you’re not playing. But you learn some things when you’re up in the stands. Things happen a lot slower up there so you see things that you don’t see that ice level. So I think I learned a little bit positioning. You see how important communication is.”