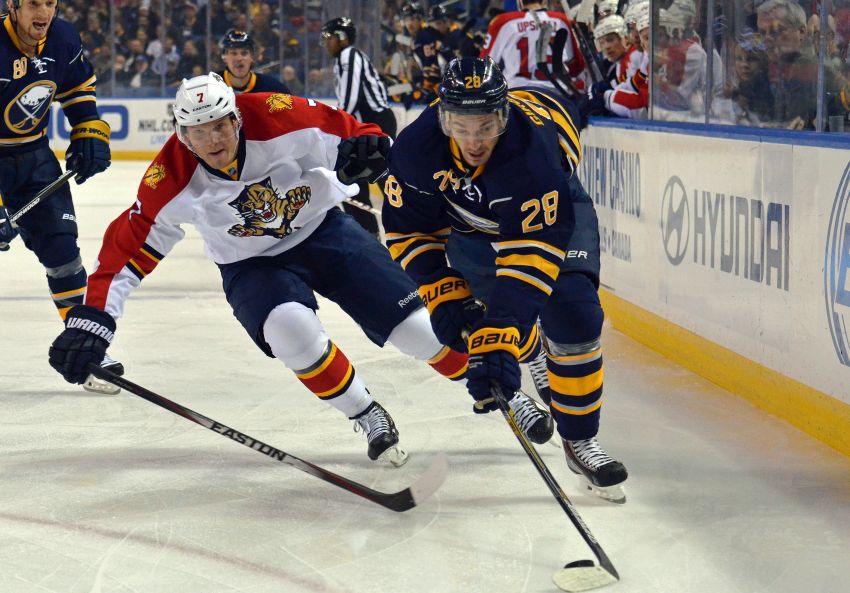 BUFFALO – Fresh off their first win this season, against the winless Florida Panthers, the hapless Sabres imploded again early Friday, allowing a team with three goals all season to dominate them.

The Panthers outshot the Sabres 16-3 during a wretched first period. The Sabres finally put their first even-strength shot on goalie Roberto Luongo at about the 16-minute mark.

The Sabres, thanks to Jhonas Enroth’s strong goaltending, escaped the opening 20 minutes tied. But Sean Bergenheim scored 3:01 into the second period, the only score in the 1-0 snoozefest the Sabres dropped before 17,864 fans inside the First Niagara Center.

The Sabres are 1-4 this season and heading nowhere fast.

“I learned last time I can’t say how I feel,” Nolan said. “We’re not happy. We’re definitely not happy. No one’s going to help us get out of this thing except for ourselves. We got a good group of guys. We just got to learn we have to compete and we have to work. …

“We’re not a fancy team. We can’t rely on our skill to get us out of trouble in certain occasions. We got to put that in our mindset before the game starts.”

Opponents have outshot the Sabres 69-36 during the first period and 191-109 overall. So much for building on Tuesday’s 4-3 shootout win in Carolina.

Still, Nolan believes the Sabres showcased some small improvements. The Sabres outshot the Panthers 14-8 in the third period.

“We’re trying to find ourselves, find out what type of team we are,” Nolan said. “The last game in Carolina we played much better the first couple periods, we came out with some jump. Four games in a row we didn’t have good third periods. The one good thing about tonight, we had a good, strong third period.

“I think the message here tonight, we have … to be a hardworking team. If we don’t work hard all the time, from start to finish, it’s going to be tough.”

Sabres winger Drew Stafford added: “We battled a little bit more in the third period, but that’s the kind of energy we need to bring in the first period.”

Stewart’s tripping call in front of Luongo, who has blanked the Sabres three straight games, killed a third-period power play.

“You have to learn to play the game right first,” Nolan said. “You’re not going to score from the perimeter. You have to go to those dirty areas, and that’s why scoring in this league is tough.”

The Sabres have seven goals all season. Their power play is zero of 15 so far.

“We haven’t really generated offense at all,” Stafford said. “Our defensive play, we’ve been running around a lot. Bringing in talent is one thing, but we’re still working on getting that chemistry together.”

The good news? The Sabres can rebound quickly. The bad news? They host the reeling Boston Bruins, one of the NHL’s heavyweights, tonight. The Bruins have lost four of their last five games and had a day off Friday.