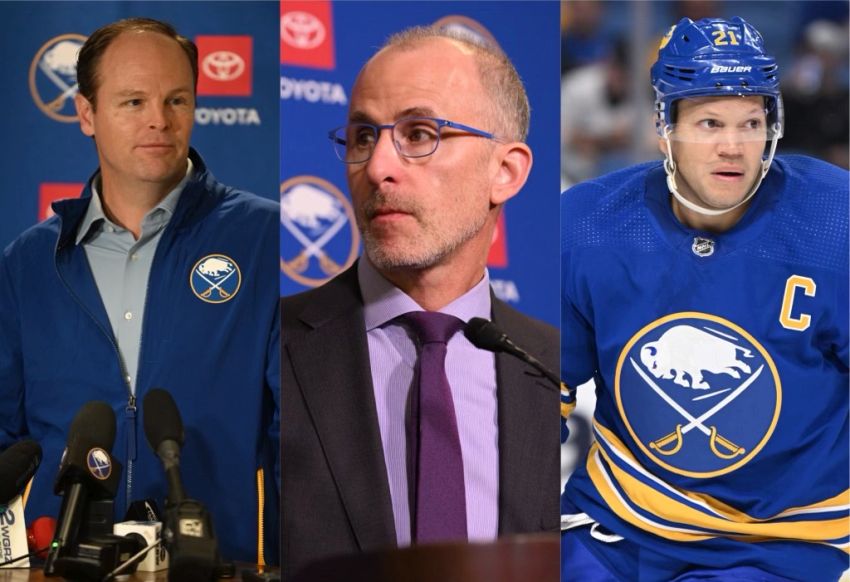 BUFFALO – In those first hours after Bills safety Damar Hamlin suffered cardiac arrest and had to be resuscitated on the field in Cincinnati, general manager Kevyn Adams sensed the Sabres needed to have some open dialogue.

Tuesday wouldn’t be a normal game day as the Sabres prepared for the Washington Capitals. Many players were watching “Monday Night Football” when Hamlin collapsed after tackling Bengals receiver Tee Higgins. The Bills and Sabres are both owned by Terry and Kim Pegula, and the teams have become tied together.

“It hits home, not only just because it’s sporting community, but because it’s Buffalo,” Sabres center Tage Thompson said following Thursday’s practice at KeyBank Center. “I think going into that game, your head’s a little bit in a different space.”

The harrowing scene clearly left them feeling vulnerable, and Adams wanted the Sabres to gather before the contest in Washington, an emotional and entertaining game they would win 5-4 in overtime.

“It got me thinking about different times in my career or things that I’ve seen on the rink that have been situations similar,” Sabres captain Kyle Okposo said of the Hamlin incident. “It puts a little bit of doubt in your head and causes a little bit of fear, a little bit of anxiety.

“We have a team that is willing to talk about all those things, and we were able to do that together as a group and make sure that everyone was doing OK.”

The Sabres, coach Don Granato said, take pride in having open dialogue and allowing players, coaches and staff members to share how they feel. In that moment on Tuesday morning, he said “that was a necessity.”

When they got together, Adams, who served as the team’s spokesman on Tuesday, expressed how proud he was of their work in the community. Following the racist gun attack that killed 10 people on May 14 and the recent snowstorm that ravaged the region, the Sabres have been leaders in the community. He also talked about the cultural impact the Bills and Sabres have in the area.

“Whatever we can do away from the rink to help the community when it’s hurting, we’re going to do,” Thompson said. “This is home for me and for obviously everyone in this room. You want to take care of your home and the people around it.”

Granato said players weren’t afraid to speak up in the meeting.

“There’s no solutions, there’s no answers, it’s just talk,” he said. “And then we talked about, OK, how so we move into this afternoon and tonight and come up with a plan collectively, because it wasn’t a situation where I can come up there with the plan. The plan’s got to be made right here with the group right now with this discussion moving into tonight’s game.”

Granato said when players examined the game against the Capitals, they realized, “Maybe there’s something we can give here that’s a positive.”

“They love playing hockey and they certainly love their teammates,” he said. “And that was a forum where they could just embrace each other and play the game we wanted to play knowing that they’re all going through different things and don’t know what to make of it. …

“We all go through life not thinking about situations like that and just living. When one happens, it forces you to stop and feel how vulnerable you might be. … They really felt, it looked like, ‘Let’s just do something together and we have a chance to do something together.’ And it was enjoyable to see them embrace that.”

“We were able to think about that and think about all the people that draw positive emotions from watching us play and just try to give people a semblance of normalcy in an extremely scary time for everybody,” he said. “Obviously, everybody’s thinking about (Hamlin) and has it on their mind but hopefully to try to give people a bit of a reprieve in watching us play was something that we tried to do.

“To where we got to emotionally, you try to block it out. But I just think that when you talk about things, it helps you move on from things and heal at an appropriate rate, and that’s what we did.”

An emotional Alex Tuch said the Sabres “had a job to do.”

“And we wanted to play for the City of Buffalo and Damar,” the winger said.

The Sabres arrived at Capital One Arena wearing “Love for 3” shirts to honor Hamlin, an idea Adams, Granato, Okposo and Nicole Hendricks, the team’s senior director of communications, came up with. In erasing a third-period deficit against the Capitals, the Sabres earned one of their most memorable victories in years.

“We owed it to the City of Buffalo and to Damar try to give some life and get some positive energy going for the city,” said Thompson, who scored the winning goal exactly 3:00 into overtime to complete his third hat trick this season.

Of course, Hamlin, who’s in intensive care in a Cincinnati hospital, wears No. 3. The overtime goal on Jan. 3, which Thompson called “a special one,” was also his 30th this season.

“I’m a big believer in God and I think that’s a sign,” he said of all the threes. “I don’t know if you can make up something quite like that. I think prayer is a powerful thing, and that’s really all you can do in this situation.”