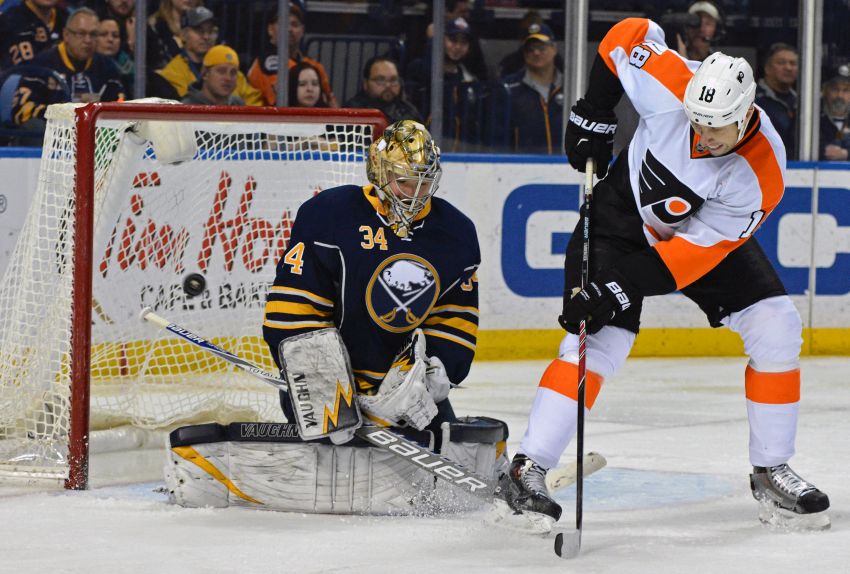 BUFFALO – If you’re a glass-is-half-full type, the Sabres did some good things in Saturday’s 4-3 defeat to a weak Philadelphia Flyers team, their 10th consecutive regulation loss.

For the first time in weeks, the Sabres started strongly and showcased a better effort early, taking the lead and dictating much of the play. When the Flyers went up 2-1, they tied it late in the second period. They even scored three goals for the first time in 10 games.

If you’re a glass-is-half-empty type, well, the Sabres lost again. They blew a lead and fell apart late to a team that had been had been blanked in its previous two games and was ripe to be beaten.

The Sabres, who start a five-game road trip tonight in Detroit, have never lost 11 straight games in their 44-year history.

Since Edmonton won a 3-2 shootout in Florida, the Sabres fell to 30th overall in the NHL.

Still, fresh off of Thursday’s 7-0 home shellacking from Minnesota, the Sabres made some baby steps Saturday before a capacity crowd of 19,070 fans inside the First Niagara Center.

“I think we gave a way better effort,” said Sabres center Zemgus Girgensons, who scored twice. “We worked way harder. We wanted this one. It’s just we made mistakes that shouldn’t have been made.”

They most recently lost 10 consecutive games during a 0-9-1 stretch that began last season and ended in October.

Early on, it looked like the streak would end.

Girgensons’ team-leading 12th goal, his first in nine games, opened the scoring 18:51 into the game. The Sabres hadn’t scored first since Dec. 23.

But the Sabres blew a chance to earn their first win since Dec. 27.

With goalie Michal Neuvirth off for an extra attacker, Girgensons’ power-play goal made it 4-3.

“(If you) get to the basic root of if you compete, at least you compete and put in the effort,” Nolan said.

Nolan can put up with mistakes – 19-year-old defenseman Nikita Zadorov blew a coverage on VandeVelde’s goal – if his players work hard.

“The other guys weren’t going very good,” Nolan said. “We have to send a message to the guys, ‘If you don’t want to work, you won’t play.’”

Hodgson, who played only five minutes, 57 seconds overall, is pointless in his last 11 games and has only two goals and six points all season.