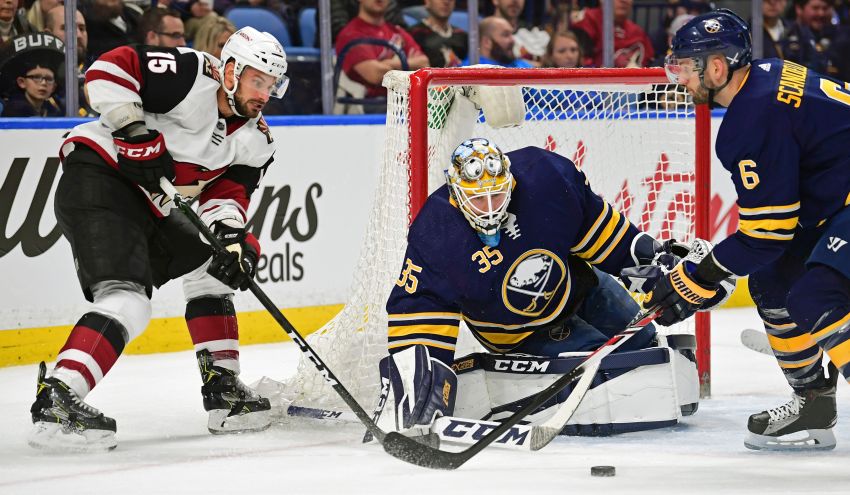 BUFFALO – It will be three years ago next week – March 26, 2015, the 74th game in the second tank season – hometown fans did the unthinkable and cheered against the Sabres.

It could be argued that night, a 4-3 overtime loss to the Arizona Coyotes, ranks as the nadir of Buffalo sports.

Back then, Sabres fans believed losing would eventually lead to winning. That loss to the 29th-ranked Coyotes, another team fielding a less-than-stellar lineup, would essentially secure the bottom-feeding Sabres the prize, the right to select mega-prospect Connor McDavid or Jack Eichel first or second overall.

On Wednesday, the Sabres and Coyotes faced each other again as the league’s two worst teams. This time, fans inside KeyBank Center – those who bothered showing up – rooted for the hometown team, although they had little to cheer for.

These days, the last-place Sabres are trying to win. They just can’t do it. As Wednesday’s 4-1 loss illustrated, they’re still downright awful some nights.

The Sabres’ feeble effort Wednesday in their 50th loss (23-38-12) incensed coach Phil Housley, who was seething after the game.

“It’s disappointing because you manage the schedule, you’re trying to get your group the best energy,” Housley said. “We didn’t go on the ice (Tuesday). I just didn’t really like the response and the energy level of our team.

“Obviously, special teams played a big part of it (with two power-play goals), but the bottom line is our compete and battle (aren’t good enough) – you continue to say that, this is game 73 – and that’s the frustrating part.”

Winger Jordan Nolan, who scored the Sabres’ only goal, said: “Not a lot of energy out there, not a lot of work, not a lot of compete. I mean, that’s the two bottom-place teams so there should be a little bit of pride in there.”

Still, the Sabres hung around. Down 2-1 before the third period, Housley told his players they only have a few more home games this season.

In the final 20 minutes, they couldn’t generate one notable scoring chance.

“I don’t think the Coyotes did anything that was outstanding except their work level,” Housley said. “We get outchanced in the third period, we’re down 2-1. It’s an opportunity to get back in the game, and they outworked us in the third period.

“I’m telling the group that we have 10 periods left to play in this building, that’s what’s the frustrating part, because it’s not the way we have played, it’s not the response we’re looking for. It’s disappointing.”

Sabres center Ryan O’Reilly said: “I don’t think we could get anything going. Sometimes that happens. You’ve got to find a way to grind it out.”

The anemic effort came after the Sabres spent most of Monday’s 4-0 defeat buzzing around the Nashville zone. While the Sabres lost, they seemed satisfied they asserted themselves well against the scorching Predators, the NHL’s best team.

“That’s just where we are as a group,” Housley said. “We can’t handle any success. By the way, we lost that game 4-0, so you think you’d come out gangbusters to start the game. It was a very meaningful game in the respect that you’re last place in the league. That’s what’s hard to swallow and it’s just unacceptable.”

Fans find the Sabres so unacceptable they stay home in droves. While a crowd of 17,029 was announced Wednesday, it looked like about 10,000 or so showed up. Chunks of blue seats were visible all over, especially in the 300 level.

It might’ve been the smallest crowd in 14 or 15 years.

Sabres goalie Chad Johnson, who took a shot off his mask in the first period, left the game after playing just 26:04. Linus Ullmark replaced him.

Housley had no update on Johnson.

“It’s unfortunate that our goalies have to play a perfect game to win a game,” he said.