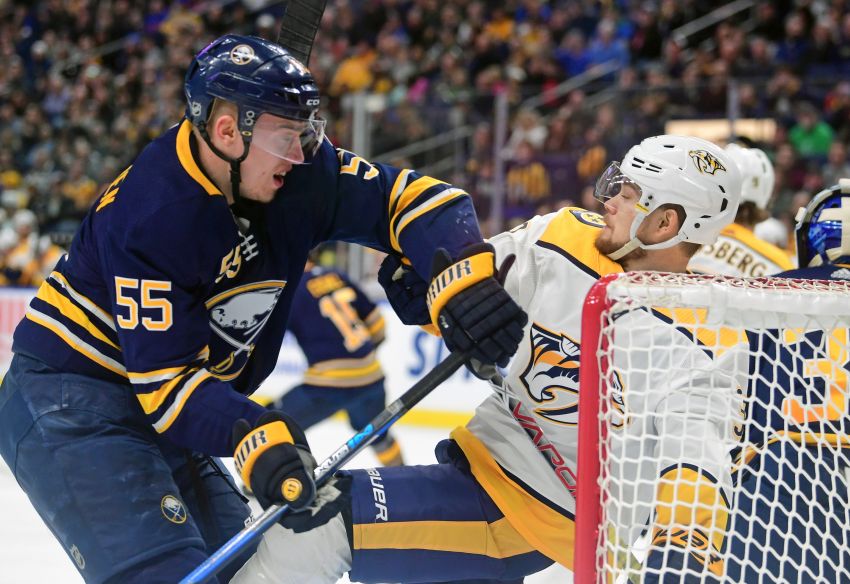 On paper, it was an epic mismatch.

Having earned only 58 points through 72 games, the last-place Sabres have been eliminated from the playoffs. Meanwhile, the Predators, thanks to an NHL-best 106 points, have already clinched a postseason berth.

In an age of parity, the Predators possess remarkable depth. They boast 14 players who have scored 10 or more goals and eight who have hit at least the 40-point mark.

Last season’s Western Conference champion appears to be better than a year ago, especially with 6-foot-5 goalie Pekka Rinne looking impenetrable at times.

Still, the Sabres hung tough before an announced crowd of 17,507 fans inside KeyBank Center, keeping the game scoreless until more than halfway through and at 2-0 most of the third period.

At this point in another lost season, playing well against a powerhouse team gearing up for a run to the Stanley Cup – the Predators have won nine straight road games – represents progress.

“I’m really happy the way we played against the best team in the league at this point, exactly the way we want to play,” said coach Phil Housley, a Nashville assistant for four years before joining the Sabres this season. “I thought we were fast, we were aggressive, we had clean execution.”

But the Sabres, who outshot the Predators 35-32, couldn’t beat goalie Rinne, who posted his eighth shutout.

How good is Rinne right now? He’s probably the best goalie in the world.

“He’s one of the best goalies to ever play in our league for a reason,” Sabres center Jack Eichel said.” Obviously … you don’t want to make the extra pass but against a goalie like that. Maybe you’re thinking about it because of how calm he is in there, he doesn’t leave a lot of pucks hanging around his crease, he gobbles a lot of stuff up. …

“He made it tough for us, but we competed hard. You’ve got to like the effort but at the end of the day it’s a 4-0 loss.”

Housley said: “We had some really golden looks (Rinne) made look really easy. But I thought the areas we could’ve been better was right in front of him, because there was rebounds to be had.”

Housley said “you can’t fault the way our guys played.”

“They brought their best game,” he said.

So did goalie Linus Ullmark, who made only his second NHL appearance this season. When Housley said last week he planned to give the prospect some late-season starts, you figured he might ease him in early.

But Housley threw Ullmark, 24, right into the fray Monday. Seven seconds into the game, Ullmark stopped winger Viktor Arvidsson on a short breakaway.

“It’s good for your confidence and good to get that first shot quick,” Ullmark said.

Housley said: “He stood tall, he made some big saves when he had to. It’s just unfortunate. I really liked the way he he played tonight. I thought he was really in control.”

The Predators finally beat Ullmark 12:29 into the second period, when center Mike Fisher tipped the puck in close.

“Their skate went into our goalie in the crease, in the blue paint,” said a perturbed Housley. “I would call that 100 out of 100 times. To me, that’s goalie interference. His skate hit Linus’ skate, which doesn’t allow him to get down into the butterfly and make the save. So I don’t know what you call goalie interference anymore.”

Goalie interference has been a hot-button issue all season – no one seems to have a handle on it – and is currently being debated at the general managers’ meetings in Florida.

“(We) gave them a couple looks in the third, they put them away, but they didn’t deviate from their plan,” Sabres winger Jason Pominville said. “That’s why they’ve been getting results.”