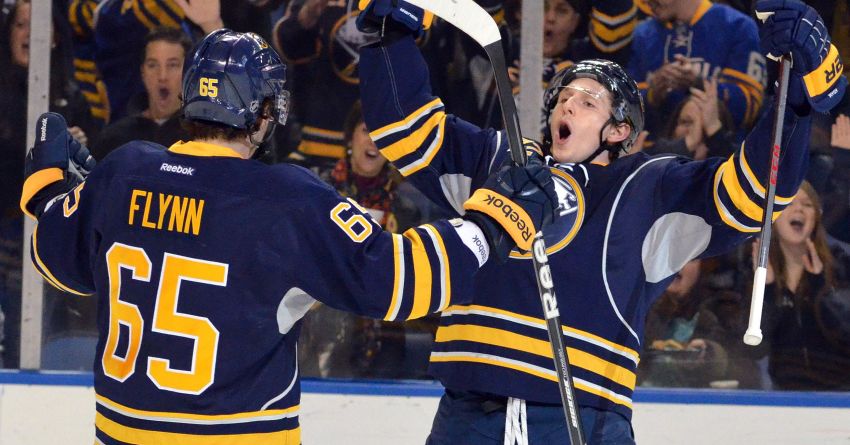 BUFFALO – On Friday morning, hours before their 4-2 victory over the Ottawa Senators, new assistant captain Steve Ott promised the Sabres would keep fighting for that unlikely playoff berth until the bitter end.

Two days after management jettisoned captain Jason Pominville at the trade deadline with the message the Sabres’ plans have shifted to the future, players emphatically say they’re still focused on the present.

They want to win now.

Ten games remain for the 12th-place Sabres, who trail the eighth-place New York Islanders by four points; seven contests are at home inside the First Niagara Center.

“There’s a true factor of actually catching a playoff spot if we hold some destiny in our own hands,” Ott said after scoring the tying goal 3:15 into the third period. “Obviously, we’re going to need some help from the top-end teams to knock off the teams we’re racing with. But you know what? We’re playing a lot of those guys we’re racing with for a playoff spot.

“We have to continue to be, I guess, that old Bad News Bears hockey club.”

Fresh off a nice 4-1 win Tuesday in Pittsburgh, the Sabres scored 12 seconds apart to seal their triumph before 18,811 fans.

Rookie Brian Flynn knocked in Jochen Hecht’s rebound 14:37 into the third period. Hecht then cemented the game, quickly backhanding a hard shot in from the left circle with a defender draped on him.

“I closed my eyes and threw it,” said Hecht, who’s notorious for using his backhand from all angles.

In players’ minds, any chance is enough, though.

“Our whole goal from the beginning of the season was to make the playoffs,” said Sabres defenseman Mike Weber, who had two assists. “It still is. It’s still mathematically possible. We’re still right in it.”

Ott believes “all of us have a big reason to play.”

“If it’s young guys trying to make the team next year; if it’s guys looking for contracts; if it’s veteran guys looking for extensions. I mean, there’s so many aspects to play this game, and there’s still a lot of life in here to maybe catch a playoff spot.”

Goalie Ryan Miller, who broke Dominik Hasek’s all-time franchise saves mark Friday, said this week has been tough on some of the veterans. Still, that shouldn’t detract from their focus.

“It’s just trying to figure out what the temperature is and what’s going on,” Miller said. “It doesn’t stop the fact we have … points on the table – try to be professional, prepare, put everything aside. Everything else can wait, just try to be right here, right now, play some hockey, see how it goes.”

After Adam one-timed Adam Pardy’s pass in the right circle, the 22-year-old raised his arms and looked to the rafters as teammates congratulated him.

“It was a good feeling,” Adam said. “It was nice to get that one, for sure. It’s been a long time coming.”

Weber added: “That’s huge for him and his confidence. He’s a great player. What happened happened, whatever it was. He’s still kind of growing into his body. We get him going, we’re going to be a special team here.”

“I don’t think we had everyone going today,” interim Sabres coach Ron Rolston said. “We just found a way to win there in the third.”

Miller added: “After getting down we could’ve hung our heads after this week. But we answered back, and then we made a nice push.”

“There’s not too many words left to describe Ryan Miller,” Weber said. “He’s a special individual and a special player.”

Sabres know Pominville’s departure could only be first major move