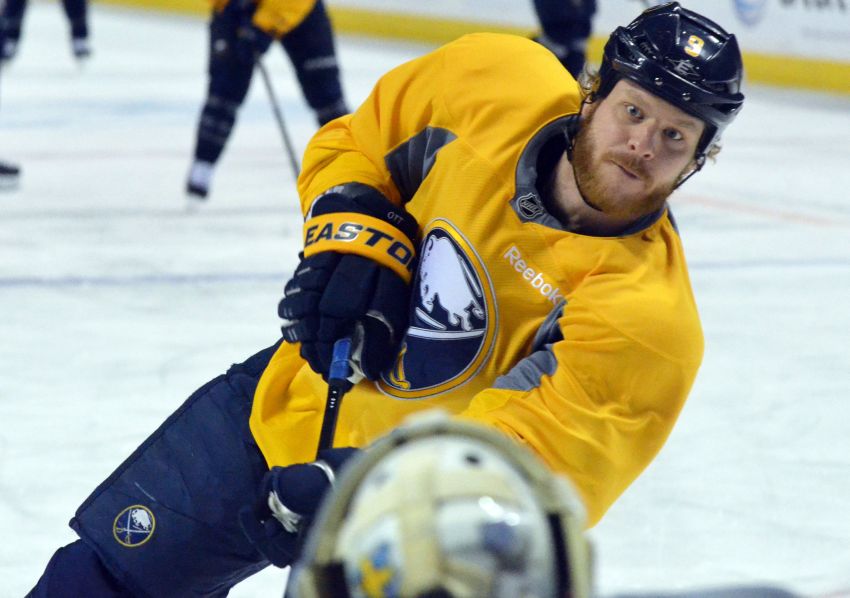 BUFFALO – Steve Ott said this morning the captaincy isn’t on his radar. The gritty winger, arguably the Sabres’ biggest heart-and-soul-player, received an assistant captaincy for the rest of the season after captain Jason Pominville was traded Wednesday.

Getting the “C” next year seems like a natural progression for popular 30-year-old veteran.

“I truly want to just be a hockey player on this team,” Ott said inside the First Niagara Center after preparing for tonight’s game against the Ottawa Senators.

Ott has passionately supported his teammates all season, his first with the Sabres. Even in the darkest times, he has spoken positively about the struggling club, never giving up hope.

It’s a characteristic that immediately earned him respect from teammates.

After Tuesday’s 4-1 win in Pittsburgh hours before the trade deadline, Ott insisted the Sabres should be buyers before the embargo.

“Oh, it was tough,” Ott said. “Let’s be honest, what’s Jason’s done for the Buffalo Sabres over the last 10 years or so is unbelievable. He’s a heck of a player. It’s not easy to replace a guy like that. It takes years to build a prospect into a Jason Pominville. It’s disheartening in that our team obviously wasn’t playing up to where it needs to be, and there’s change in this. Anytime you lose a brother it’s always hard.”

Even with arguably the Sabres’ best player gone, Ott won’t give up on the postseason.

“We still have a lot of hope in this dressing room,” he said. “I mean, we got eight home games. We got three on the road. A lot of destiny is in our hands. But we have to win games. That’s a fact of where we are right now.”

But like other Sabres, Ott, whose contract expires after next season, “absolutely” would like to hear about the team’s plan from general manager Darcy Regier.

“I’m 30 years old,” Ott said. “I don’t know … where everybody stands. In these type of moments, especially after the trade deadline, you look where you are. Obviously, I came here with aspirations of hopefully staying for a long time.”

In other news, winger Thomas Vanek skated this morning but will miss his fifth straight game.

Nathan Gerbe will skate on the right wing with Ott and Cody Hodgson, Pominville’s old spot.