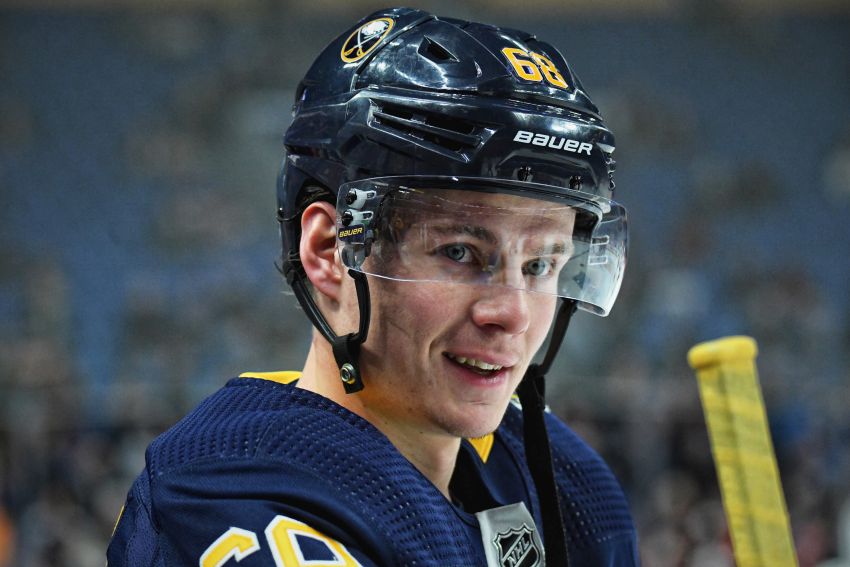 BUFFALO – Sabres winger Victor Olofsson said he has never experienced anything like the lower-body injury that has sidelined him the last 13 games.

In his first seven years as a pro, the high-scoring Swede showcased terrific durability, never missing more than a couple weeks of action.

Then on Jan. 2 against the Edmonton Oilers, Olofsson’s left skate got caught in the ice, causing him to fall backwards.

“It was unfortunate, no one around me, just kind of got stuck with my left skate and fell,” Olofsson said after returning to practice Saturday. “It happens. I’ve been trying to stay positive. I’ve been working very hard to come back here.”

But don’t expect to see Olofsson play this afternoon against the Anaheim Ducks at KeyBank Center or later this week. Sabres coach Ralph Krueger said Olofsson needs “a week or more” before he returns, meaning he could miss at least another four games.

“It’s just getting his mind space into what he needs to do,” Krueger said. “I mean, you go from the lack of speed in your existence on a day-to-day basis to the National Hockey League speed, which is going to come back at him.

“So I think it was good for him to be in the drills today and, again, physically, we still see we need to be patient on this one.”

When Olofsson was injured, the Sabres said he would be out five or six weeks, so his first practice and Krueger’s words match their original time line.

“Still taking it pretty slow,” Olofsson said. “But it gets a lot better every day.”

“It’s not quite there yet, but it was nice to kind of get out there and get the feel of the game again,” he said.

The Sabres sorely need Olofsson, one of the NHL’s top rookies. They’ve compiled a lackluster 6-6-1 record without him.

“Honestly, I haven’t really been paying much attention to that,” Olofsson said of the goal-scoring race. “Right now, I’m just looking forward to getting back. I just want to play hockey right now.”

Olofsson said he started skating a few weeks ago. Naturally, when he watches the Sabres play, he said he gets “really eager to get back into it.”

His presence, especially on the power play, where he has utilized his lethal shot from the circles, likely would’ve translated to more victories.

The Sabres have scored just one goal four times during his absence.

Krueger believes Olofsson can benefit from the break in his season and the opportunity to watch games from a different perspective.

“He’s been able to do some reflection and some more mental growth,” Krueger said. “I … think it’s going to take him even to another level of maturity, having a bit of a pause in a season which was truly rookie of the year, NHL-caliber.

“We’re confident he can get back to that level, but even with a higher feeling of confidence, having looked at the game from the outside now.”

“When you play with them, you have to understand you’re going to go up against top lines in the league, you’re going to play 20 minutes and it’s a grind in both directions,” Krueger said. “I think Jimmy’s really taken on that side of the responsibility with them.”

“It was a good feeling it made it 3-0,” he said, “but I thought it was a big goal in that game, just get that extra cushion, and it turned out to be the game winner.”