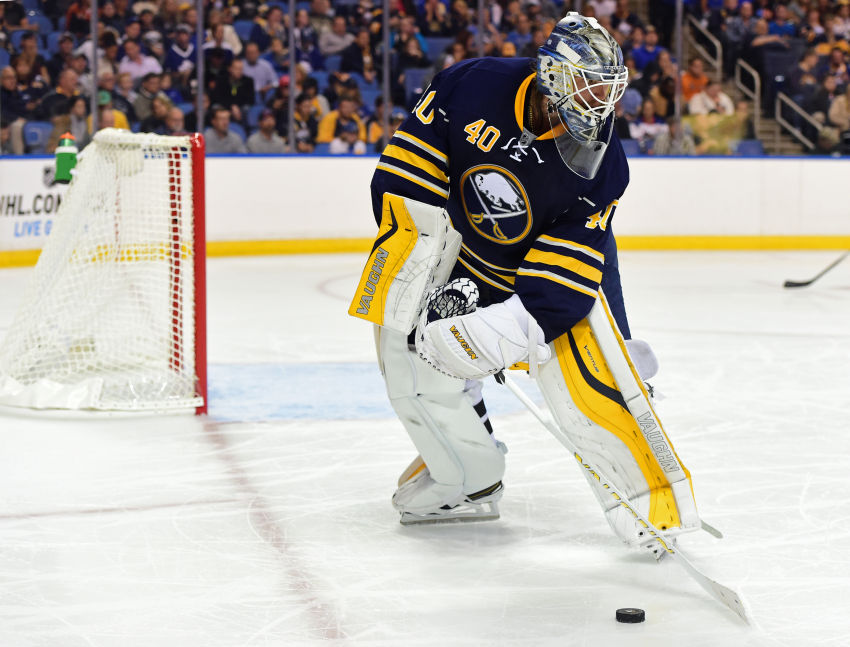 BUFFALO – Almost three months after Robin Lehner suffered a high ankle sprain, there’s some light at the end of the tunnel for the injured Sabres goalie.

“We’re looking at him starting a schedule for him to return to practice and possibly down the road return to play,” Bylsma said following practice inside the First Niagara Center. “Next few days we’ll be making that.”

Lehner, who hurt his right ankle 32 minutes into his debut as the Sabres’ new starting goalie, has been taking shots on his own. Bylsma said the Swede has been pushing off and loading up on the post, signs of progress.

The Sabres want to increase Lehner’s load in the next two weeks. Lehner could play some AHL rehab games, Bylsma said. Remember, Lehner suffered a season-ending concussion last February with Ottawa, meaning he has played barely half of one game in almost a full year.

When Lehner started wearing a walking boot and using a scooter again earlier this month, Bylsma insisted he hadn’t suffered a setback. The Sabres originally said Lehner would miss six to 10 weeks.

– Defenseman Mark Pysyk, out the last 17 games with a lower-body bone bruise, is progressing with his off-ice workouts, Bylsma said. Pysyk could return to the ice soon.

Update: Kane, according to The Buffalo News, “is the subject of a sex offense investigation by Buffalo police for an incident that allegedly occurred Sunday morning in a downtown hotel room near First Niagara Center.”

– Winger Marcus Foligno, sidelined the last four games by a cut on his elbow, is available to play. Foligno fell Dec. 15 in Detroit.

Foligno said he had to take antibiotics.