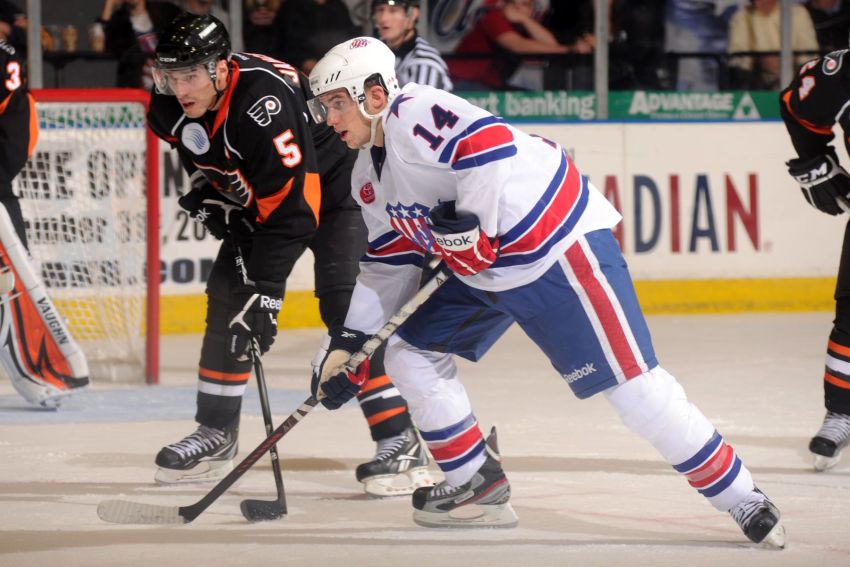 When he had supposedly healed, the Sabres sent Tropp to Rochester on Jan. 2. But the 22-year-old responded poorly to his first three appearances, so the Americans shut him down until Feb. 8, giving him a full month between games.

“It was frustrating at times,” Tropp said Friday prior to playing his 14th NHL game, a 2-1 shootout win over the Boston Bruins inside the First Niagara Center. “But I think I took a few positives out of it, learning how to channel those emotions into positives.”

Tropp has impressed since returning, compiling nine points in seven games this month, including a two-goal, three-point effort Wednesday.

The Sabres watched that strong performance in a 5-2 win over Hershey closely.

“He’s gone real well,” Sabres coach Lindy Ruff said about Tropp. “We talked amongst two or three players. We had a couple of our guys down there watching the game, too. That’s their decision, and I think it’s the way it should work. If a player’s playing well and making a difference, he should be here playing.”

The concussion hasn’t made Tropp, an underrated prospect with a physical edge and solid scoring touch, play scared.

“You can’t play like that or else bad things are going to happen,” Tropp said.

Ruff added: “You can’t change your game. He knows for him to be effective, he’s got to go through people. He’s got to use his legs. You don’t go from that type of player (and) decide, ‘I better be a goal scorer here.’ It doesn’t work that way. When you get comfortable, you got to get back in the saddle and ride the horse again.”

Tropp acknowledged his comfort’s increasing with each recall. When he’s healthy, the second-year pro’s usually the first forward the Sabres summon.

“The first stint I was more nervous,” Tropp said. “I think every game you play and every practice you get up here, the more game time you get, you’re just going to get more comfortable and you’re going to adjust to the pace of the game. That’s all you want is to be able to show you can play and contribute at this level.”

Tropp left a wildly inconsistent Amerks team that, like the Sabres, has dealt injuries and a depleted roster most of the season. Entering Friday, the Amerks had only won two straight once since the calendar flipped to 2012.

“Down there, I think we’re finally getting healthy,” Tropp said. “We’re starting to play a little bit better. We had a good game Wednesday night. The big thing down there is consistency.”

Meanwhile, Boyes, who was hurt Tuesday, is “close,” Ruff said. He could play tonight in New York against the Rangers.

Sabres goalie Ryan Miller has 25 career shutouts, a nice number that ranks second in franchise history to Dominik Hasek’s 55. Miller could have about 10 more, however.