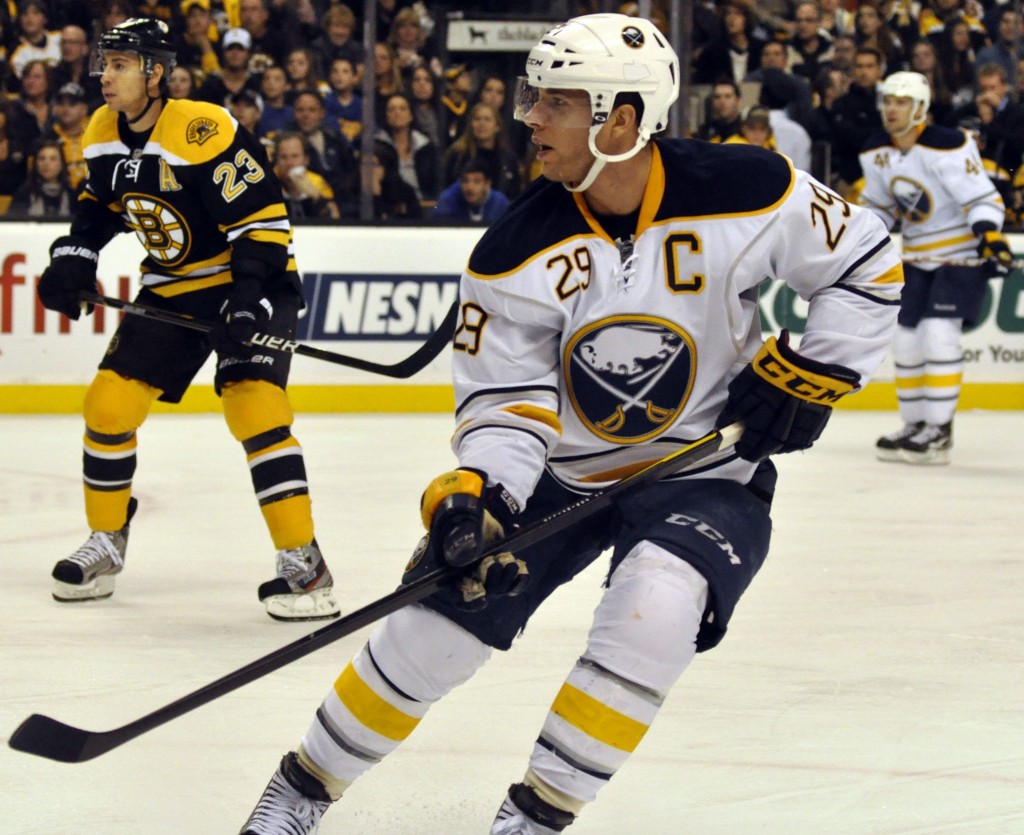 BUFFALO – Sixty games into the season, Jason Pominville hasn’t shown any signs of letting up. With five points in the last two contests, the Sabres captain already has 23 goals and 59 points, seven more than he had all of last season in 13 fewer appearances.

In a disappointing year for the Sabres, Pominville’s been the only constant presence, showcasing a remarkable consistency right from opening night, when a goal and two assists began a 14-point month.

The 29-year-old, the lone player to play every contest, has at least one point in 42 games this season entering a critical weekend for the 12th-place Sabres, who host the Boston Bruins tonight and play a road tilt Saturday in New York against the Rangers.

Pominville has only a pair of two-game point droughts this year and just one three-game point drought. He halted that stretch earlier this month by compiling six goals and seven points during a six-game streak.

“He’s been consistent from start to finish,” Sabres coach Lindy Ruff said Thursday inside the First Niagara Center. “In key situations, he’s been able to be the guy that’s been able to get us through on the offensive side of it. There hasn’t been any stretch for him where he’s fallen off.”

Not surprisingly, Pominville’s leading the Sabres’ resurgence, which has them seven points back of the final Eastern Conference playoff spot.

He opened the scoring Sunday just 53 seconds into a 6-2 win over the Penguins, and then created Tyler Myers’ goal Tuesday 1:21 into a 2-1 victory over the Islanders, the first of two assists.

Pominville, half of a dynamic winger duo beside Thomas Vanek, ranks 11th in NHL scoring. His 39 home points are third behind Evgeni Malkin’s 45. He’s had a hand in 41 percent of the Sabres’ goals, quietly becoming one of the league’s most valuable players.

“He’s been producing and it’s been consistent, which is very difficult to do in the league,” Sabres defenseman Robyn Regehr said.

Why hasn’t Pominville experienced even a brief decline?

The NHL All-Star wasn’t sure. He credits playing up front on the power play, where it’s easier to accumulate points (he has 20).

“I used to be on defense,” said Pominville, who’s been playing the point again recently. “You get those times where it’s tough to score five-on-five. Now you can rebound around the net on the power play.”

Pominville’s usually rebounding from a slow start around now. He always slumps early and finishes fast.

Incredibly, after suffering a sliced tendon in April and being slowed much of the summer, Pominville enjoyed his fastest start.

“My workouts were a little bit different (during the summer). … I was a little bit worried about how I would be,” Pominville said. “But I’m happy about the way it ended up.”

“I honestly have no idea,” Pominville said about closing each season on a tear. “I do think it might be desperation at a time of year where it’s probably the most fun to play, the most fun to be out there and compete for us. It might’ve been for a playoff spot or to be (at the) top of our division.

“It’s one of those great mysteries, I guess,” he said.

Ruff recently reunited Pominville and Vanek following a brief breakup. Vanek’s scoring again after an awful January. They might finally have a permanent center, too. Derek Roy’s been his old self between them, producing seven points in the last four games.

“It’s a good combination,” Pominville said. “I had never really played with both of them other than a couple games here and there. It’s nice that we’ve been able to find chemistry and get things going. There’s no better time than now.”

Forward Brad Boyes is a “little banged up” from Tuesday and questionable for tonight, Ruff said. Boyes didn’t practice Thursday.

Regehr, who left Tuesday after a stick smacked him on the ear, will play tonight.

“I didn’t feel like I was able to stay stationary,” Regehr said. “I felt like I was stuck on a boat in the middle of the ocean with six-to-eight-foot swells.”