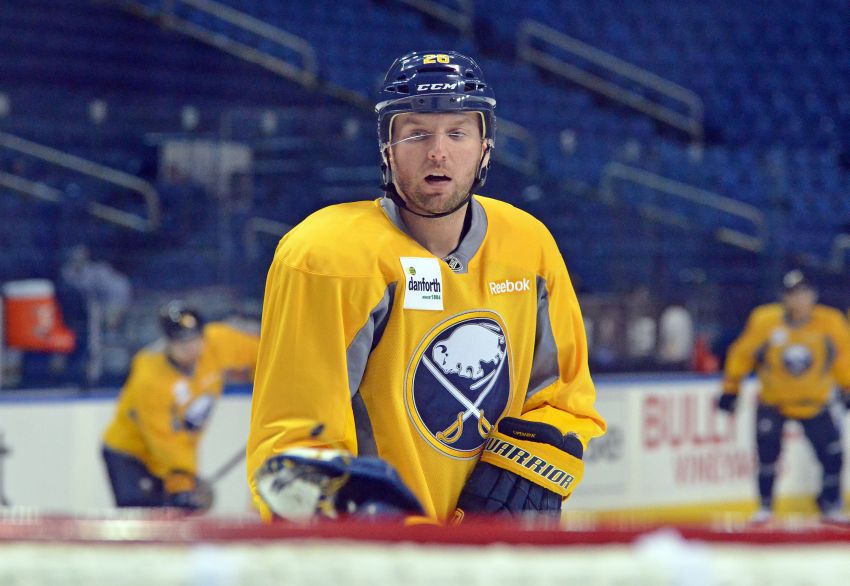 The Sabres retained 19.5 percent of Vanek’s $6.5 million salary in the trade, according to Sportsnet’s Chris Johnston. They also kept the same portion of his salary cap hit.

Perhaps that’s why the Isles, who sent high-scoring winger Matt Moulson to the Sabres, also parted with a 2014 first-round pick and 2015 second-round selection.

But, according to ESPN.com’s Pierre LeBrun, if that first-rounder is a top-10 pick, the Isles can defer it to 2015.

The Sabres retained money after sending Jason Pominville to Minnesota last season. According to capgeek.com, they’re paying $795,000 of his $5.5 million salary this season.

Teams can retain up to three salaries under the NHL’s new collective bargaining agreement. So, yes, if the Sabres trade goalie Ryan Miller, they could keep some of his $6.25 million salary.

“I grew that confidence with each day of training camp,” Tropp, who could make his season debut this weekend, said Monday following practice inside the First Niagara Center. “‘Oh, I’m still the exact same player I was, to be honest. Maybe a little bit better skater.’”

Sabres coach Ron Rolston said Tropp’s out for Thursday’s game against the Rangers in New York. The Sabres host Anaheim on Saturday.

The 18-year-old Russian has impressed through five appearances. The Sabres can play him nine times before the first year of Zadorov’s entry-level deal kicks in.

“We could keep him right until the 82-game cutoff,” Rolston said when asked if the Sabres would keep him beyond nine games. “Yeah, he’s been playing well.”

He then asked a reporter, “Would you send him down?”

The 16th overall pick in June has been averaging 16:34 an appearance.

From the Dallas Morning news, former Sabres coach Lindy Ruff, who returned Monday, saying what players in Buffalo receive for winning: “There will be no tip, but on your deathbed, you will achieve total consciousness.”

Tyler Ennis, a left winger or center all of his career, on playing the right side for the first time ever: “It takes a little getting used to. Sometimes I find myself going back to the left side, and then I got to sort myself out a little bit.”

Ennis, who has only one goal and two points in 13 games, is skating with Moulson and Cody Hodgson.

Mikhail Grigorenko’s assist on Steve Ott’s goal in Monday’s 4-3 loss to Dallas was his first point since March 3. The 19-year-old recently switched from center to right wing.