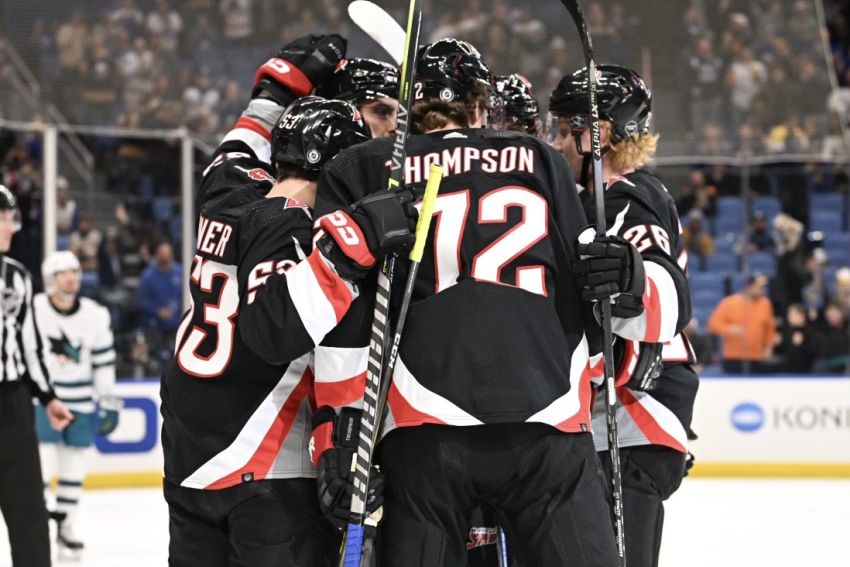 BUFFALO – If the struggling Sabres couldn’t fix some of their recent problems and earn a much-needed win against the lowly San Jose Sharks, well, you had to wonder when they’d ever get on track.

The Sharks limped into town Sunday to close a four-game road trip having lost four of their last five contests, including a defeat a night earlier in Ottawa.

They were ripe to be beaten and the Sabres, as their 6-3 victory before an announced crowd of 13,655 fans at KeyBank Center illustrates, took advantage of it.

The Sharks offered the Sabres, who had lost three of their previous four outings (1-2-1) a get-well game and an opportunity to keep showcasing one of the NHL’s elite attacks.

– The Sabres, whose recent penchant for taking bad penalties and blowing third-period leads kept biting them, stayed disciplined and closed out their 11th win this season.

“We stayed out of the box and there weren’t calls, which was a huge help,” Sabres coach Don Granato said. “That’s been a problem. It certainly was (last week) with Tampa and then in Detroit and against Colorado. So the last three games have been real penalty issues. We stayed out of that through the third period.”

After winger Jeff Skinner put the Sabres up 3-2 4:21 into the second period, they kept coming at the Sharks in waves.

“Details,” Sabres defenseman Rasmus Dahlin said of what went into closing the game. “No (late) penalties today. We played hard throughout the 60 minutes. We never took our foot off the gas.”

– The Sabres scored at least four goals for the fifth time in six games and have recorded a whopping 21 goals during that stretch.

Their “Kid Line” of center Dylan Cozens and rookies JJ Peterka and Jack Quinn, all of whom are 21 or younger, has quietly become one of the NHL’s hottest trios.

Quinn scored twice Sunday, including a power-play goal late in the second period that put the Sabres up 4-2.

Peterka scored 16 seconds into the second, beating goalie Aaron Dell and tying the game at 2. The Sharks never recovered.

“I don’t really know how to describe it,” Quinn said of the chemistry the linemates share. “I think it’s just a lot of chemistry. Me and JJ played together last year and I’m really familiar with Cozey. He’s such an easy guy to play with, he makes us better. It’s just clicking and we’re continuing to get better each game, which is a good sign.”

Cozens’ long pass to Peterka, his second of three assists on the night, created the goal.

“What an unbelievable pass by Dylan,” Granato said. “Peterka made it look easy taking it out of his skates on the fly. I believe we started with great energy and just kept getting better as a result. I thought all of the lines were participants in that.”

Dahlin said of line: “They have a lot of confidence right now, they have a lot of swagger. It’s hard scoring off the rush, but they do it. They’re super talented and they’re just going to continue to grow.”

– Sabres goalie Ukko-Pekka Luukkonen, who entered the game with a ghastly .855 save percentage in his first four games, looked sharp while making 26 saves in his second win this season.

Sabres center Tage Thompson’s power-play goal, a wicked one-timer from the left circle, opened the scoring 9:19 into the game. Goals from Nick Bonino and Kevin Labanc later in the period put the Sharks up 2-1.

Dahlin’s open-ice hit in the second period throttled Sharks winger Matt Nieto, knocking him down in the right circle.

“I saw he handled the puck and looked at the puck for a second and I decided to hit him,” Dahlin said.

Nieto stayed in the game.

“That’s one of the biggest hits I’ve seen in a while,” Sabres defenseman Mattias Samuelsson said. “For how skilled he is and how talented he is, for him to him have that in his game too, it’s pretty impressive and I think it gave us all a boost.”

The Sabres hope Bryson, 25, can stay put on the third pairing, a place Granato said he can thrive. When Samuelsson and Henri Jokiharju recently missed time to injuries, Bryson was often overworked.

“He’s not really a matchup defenseman,” Granato said. “Samuelsson and Jokiharju and Dahlin and (Owen) Power would be. So slotted correctly when he comes back, I think we can expect a lot more out of him.”

Bryson skated beside Casey Fitzgerald against the Sharks.

In other injury news, Granato said winger Vinnie Hinostroza, who has been nursing an undisclosed injury, is day to day.