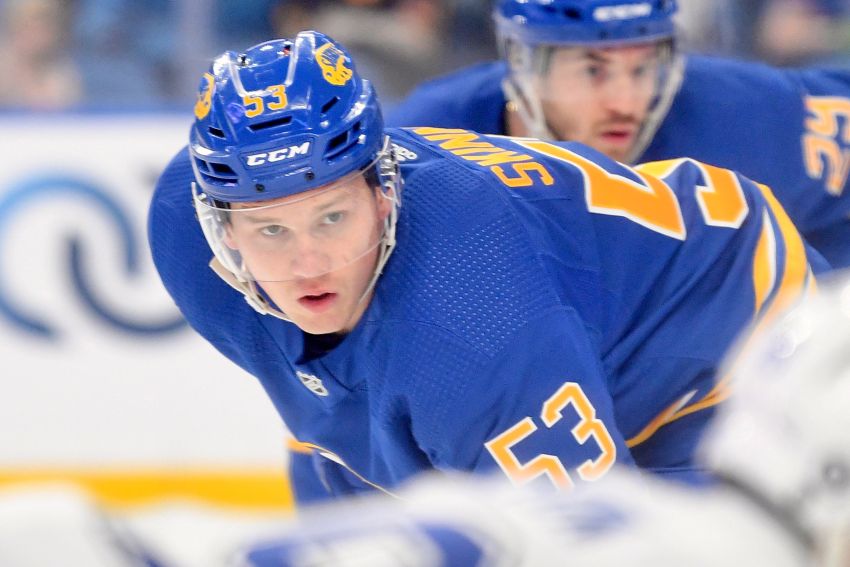 As the Buffalo Sabres roared out to a surprising start this season, they established a simple, straightforward identity by playing so aggressively.

Given their lack of star power, that style has become their bread and butter. If they get away from it, well, losses like Tuesday’s 5-3 setback to the San Jose Sharks at SAP Center will happen.

The Sabres faced a Sharks team ravaged by COVID-19 and ripe to be exploited. Seven players and coach Bob Boughner are on the protocol-related absences list. The Sharks had to recall five players Saturday just to field a lineup.

But the Sabres, coach Don Granato said, did not possess the right mindset Tuesday.

“So a really big learning lesson because that was a very winnable game. We could have taken charge of a lot of situations that we were too passive in. We had a room of competitive guys that didn’t compete hard enough and that should burn a little bit for a couple days here.”

Sabres winger Jeff Skinner said: “We have to get back to being more aggressive. Obviously, we know what they’re going through. They’re going through a lot of adversity and a lot of guys probably excited to get the opportunity. I mean, we knew they were going to come out hard.”

The Sabres were bound to hit a rut, and right now, having lost two consecutive games, they’re experiencing their first slump this season.

In winning four out of five early home games, the Sabres fed off the energy the 7,000 or so loud spectators inside KeyBank Center created. On the road, of course, they must adjust to a different environment.

Despite their struggles, the Sabres hung around Tuesday. After Jonathan Dahlen’s early goal, Skinner answered, scoring from high in the slot after the Sabres nifty work by the Sabres holding the puck during a delayed penalty.

Skinner scored again late, banking the puck off goalie James Reimer’s back. His first two-goal game since April 9, 2019 was about the Sabres’ only bright spot.

“He certainly was more aggressive tonight,” Granato said of Skinner. “He was adamant on the bench, he was one of the few guys that were really competitive through the whole game. I was looking to get him out there obviously as much as I could late.”

The Sabres, who also lost 3-2 on Sunday afternoon to the Los Angeles Kings, close their four-game road trip Thursday against the expansion Seattle Kraken.

Granato said leading scorer Victor Olofsson, who missed Tuesday’s game with a soft tissue injury, will be examined today and could return against Seattle.

“We held him out tonight in hopes that he’s back to normal on Thursday potentially,” he said.

With Olofsson out, Skinner moved to left wing beside center Tage Thompson while Rasmus Asplund shifted from left wing to Olofsson’s spot on the right.