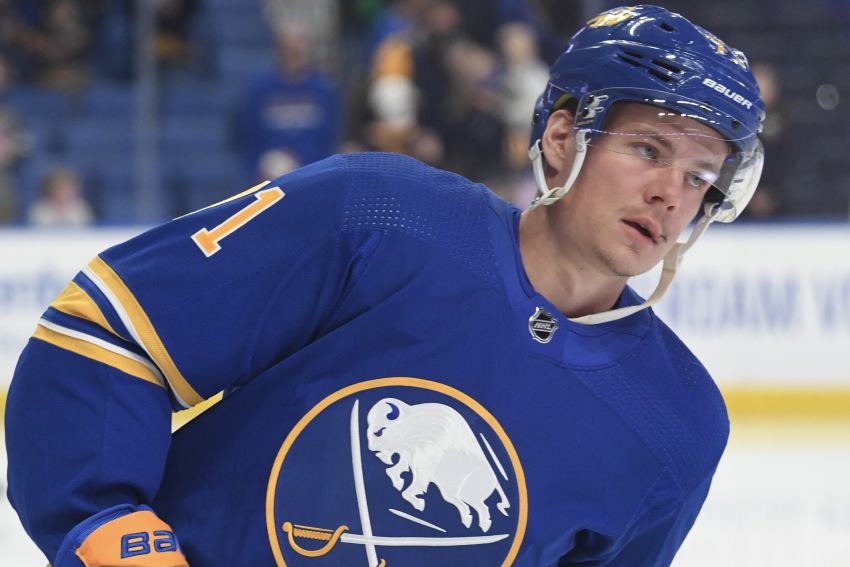 Victor Olofsson has gotten off to a hot start. ©2021, Micheline Veluvolu

Olofsson, 26, has been battling a soft tissue injury. The Sabres held the Swede out of their game day skate at SAP Center.

“He had an injury or an aggravation in a spot we just don’t want to aggravate it, so we’re doing a little bit more on it,” Sabres coach Don Granato said on a Zoom call. “I can’t say he’s definitively out. … We’re awaiting whether it would hurt to have him play and aggravate it further.”

Olofsson has recorded five goals and nine points in eight contests, including three goals and five points during a three-game point streak.

Update: Olofsson is out. Eakin will play.

In other news, the Sharks have seven players, coach Bob Boughner and their head trainer on the COVID-19 protocol-related absences list. Leading scorer Timo Meier joined the list today while while Jonathan Dahlen was removed.

The Sharks, meanwhile, have seven players, coach Bob Boughner and their head trainer on the COVID-19 protocol-related absences list. Leading scorers Timo Meier joined the list today while while Jonathan Dahlen was removed.

Granato said hasn’t heard anything about the game potentially being postponed.

“I don’t know if we would hear that until it actually happens,” he said. “I think that’s the medical teams. Even last year … we were almost the last ones to know. I think that’s a good thing because you just got to keep preparing. You don’t want to play the what-if game, you want to be fully prepared.”

Granato said the Sabres have been taking more precautions in San Jose than they did earlier in their trip.

Take more precautions yesterday and today than you did in Anaheim and LA?

“You hear about it and you know you’re going into that environment, it … gives a reminder that you can never be too safe, you can never be too conscious and do the right things,” he said. “We do a lot of things, get ready for practices without masks and we find ourselves putting the mask on a little bit more.”