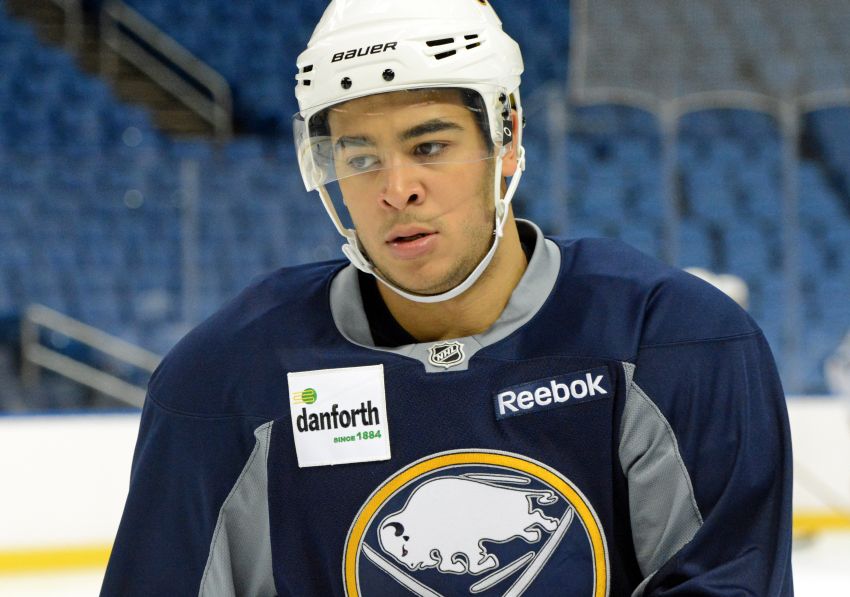 Name the only youngster in hockey who has already played alongside slick centers Connor McDavid and Jack Eichel, the top two picks in the 2015 NHL Draft.

Now, name the most prolific career scorer among the 46 players in camp.

It’s Baptiste, a 19-year-old who scored 106 goals in his four-year junior career.

Most eyes will be on Eichel tonight every time he touches the ice at the annual camp scrimmage inside the First Niagara Center. The Sabres have already sold more than 10,000 tickets and expect a record crowd of at least 15,000 fans to attend. They want to see Eichel showcase his many talents.

But the 6-foot-1, 199-pound Baptiste, the guy Eichel will be feeding pucks to on his right wing, could wind up stealing the show.

It’s no coincidence the Sabres have paired Eichel, one of the most talented 18-year-olds in a generation, beside Baptiste, who has quietly developed into arguably the organization’s best wing prospect.

Baptiste wasn’t a product of McDavid’s greatness. He scored 45 goals in 64 games with the Sudbury Wolves in 2013-14 before he was traded to McDavid’s Erie Otters early last season.

In Erie, Baptiste, who scored 32 goals last season, was often centered by – believe it or not – the third pick in the draft, Dylan Strome, the OHL scoring champion. Baptiste played on the power play with McDavid, who’s shiftier than Eichel.

Eichel possesses an explosiveness – his strides are long, powerful and look almost effortless – that wowed Baptiste during on-ice testing Thursday.

“I think maybe he took six strides to get the whole way,” Baptiste said. “He’s so powerful and strong on his feet. You combine that with the amount skill he has, it’s tough to defend.”

He added: “I’m lucky to play with both. I look forward to playing with Jack in the future.”

Of course, tonight is just an early-summer scrimmage. Still, Eichel’s line is intriguing. He clearly feels a special comfort with his left winger, Evan Rodrigues, his former Boston University linemate. Eichel and Rodrigues immediately clicked after being put together about halfway through last season.

The Sabres signed the 21-year-old Rodrigues as a free agent in April following a 21-goal, 61-point senior season.

“He’s just a super easy player to play with, works really hard, he can play in any situation,” Eichel said about Rodrigues. “He can kill a penalty, he can play on your power play, play five-on-five. He’s not overly physical, but if he needs to be, he can throw a big hit. … He can find you on a pass you don’t think is going to get to you or he can score a goal, a highlight.”

“He’s like, ‘You know where each other are going to be all over the ice,’” Eichel said. “Playing with Evan this year, everything we went through, practices every day, I had really good chemistry with him. I love playing with him.”

Eichel, however, might be the only one in Buffalo next season. Rodrigues will almost certainly start the season in the AHL. Baptiste could also begin his pro career with the Rochester Americans, although he should get a long look in training camp and might eventually force his way up.

“I’m coming here to make Buffalo,” Baptiste said. “I’m not trying to just play for Rochester. … That would be unbelievable for me, I would be ecstatic to play there. My ultimate goal is to play with Buffalo or make it real eye opening to everyone on the staff and show that I belong there.”